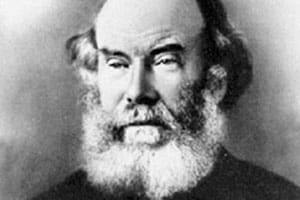 Famous for: First non-native to set foot in the present day national park and discover of Tolmie’s Saxifrage.

Born in the Scottish Highlands in 1812, William Fraser Tolmie would go on to live an industrious life as a surgeon, botanist, Hudson’s Bay Company (HBC) chief factor, and politician in British Columbia. While frequently referred to as Dr. Tolmie, he was not a MD. Tolmie did however study medicine for a couple of years, but it was botany that he was more interested in studying.

In 1832 through the recommendation of the famed botanist William Jackson Hooker, Tolmie took a job with the HBC as a medical officer. He arrived at Fort Vancouver in the Oregon Country in the spring of 1833. Soon afterward he traveled north up the Cowlitz River and then overland to the Nisqually River Delta to help establish Fort Nisqually (Nisqually House) for the HBC. It was here that he became acquainted with Mount Rainier.

On August 27, 1833, Tolmie received permission from chief factor Lewis Herron to leave for 10 days on “a botanizing excursion” to Mount Rainier. Tolmie’s main intent would be to collect medicinal herbs and observe the mountain’s glaciers. He left on August 29 with his guides Lachalet, a Nisqually Indian, and Nuckalkat, a Puyallup Indian, along with three other Native Americans. They traveled upstream along the Puyallap River to the Mowich River entering what is now the northwestern corner of the national park.

Tolmie wanted to reach the snow level to better observe the area’s glaciers. On September 3rd, he along with Lachalet, and Nuckalkat climbed to the summit of Hessong Rock near the peak that now bears his name. From this point he observed Rainier’s glaciers from a close distance prompting him to write in his journal:

“The snow on the summit of the mountain adjoining Rainier on the western side of Poyallip (sic) is continuous with that of the latter, and thus the southwestern aspect of Rainier seemed the most accessible. . . . By ascending the first mountain through a gully in its northern side, you reach the eternal snow of Rainier, and for a long distance afterwards the ascent is very gradual, but then it becomes abrupt from the sugar loaf form assumed by the mountain. Its eastern side is steep on its northern aspect; a few glaciers were seen on the conical portion. . .”

While Tolmie didn’t venture onto Rainier’s glaciers, his trip became the first recorded exploration of what is now Mount Rainier National Park and would aid subsequent exploring parties. His trip also led him to discover a new species of saxifrage which now bears his name, Tolmie’s Saxifrage.

Tolmie left Fort Nisqually in October of 1833 for other HBC posts throughout was is now western Canada; a trip back to Europe; and a stint back at Fort Vancouver. He returned to Fort Nisqually in 1843 for a 16 year stretch. During that time he served a short period in the Provisional Legislature of Oregon representing the HBC’s interest in Puget Sound. And he maintained excellent relations with both the region’s Native peoples and growing influx of American settlers. He supported Chief Leschi in the 1857 trial that led to the chief’s wrongful sentencing and execution.

In 1855 he became chief factor at Fort Nisqually but realized that the company and British interests were losing ground in the new Washington Territory. In 1859 he transferred to Fort Victoria on Vancouver Island where he continued to work for the HBC until 1871. He served in the British Columbia legislative assembly and was a strong proponent for Canadian confederation. A lifelong supporter of temperance, Tolmie also advocated for the enfranchisement of women. He studied Native American languages, publishing in 1884 the Comparative Vocabulary of the Indian Tribes of British Columbia< /em>. He passed away on December 8, 1886.

Mount Tolmie in Mount Rainier National Park is named after him as is Tolmie State Park near Olympia. Mount Tolmie, Tolmie Channel, and Tolmie Point on Vancouver Island are also named after him. Tolmie’s son Simon Fraser Tolmie served as Premier of British Columbia from 1928 to 1933.