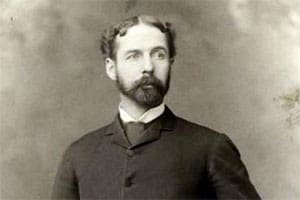 Famous for: Climbed and mapped Mount Rainier and attempted to map and measure its upper reaches.

At over 5 miles long and 1 and miles wide, the Emmons Glacier is Mount Rainier’s largest ice stream and the largest glacier in the continental United States. Once known as the White Glacier, this massive ice pack was renamed for a monumental geologist who reached Mount Rainier’s summit in 1870, just one month after the first successful climb of the mountain made by Hazard Stevens and Philemon Beecher Van Trump.

Samuel Franklin Emmons was born in March of 1841 in Boston, Massachusetts. After graduating from Harvard University, Emmons studied at the Ecole des Mines in Paris, France, and at the Frieberg Mining School in Germany. Two years later in May of 1867, he was appointed assistant geologist under Clarence King on the U.S. geological exploration of the fortieth parallel. Two years later in 1869, he became the geologist in charge of the Colorado division of the United States Geological Survey. He traveled extensively throughout the west and in 1870 along with cartographer A.D. Wilson surveyed and successfully climbed Mount Rainier. Emmons and Wilson arrived in Washington Territory shortly after Stevens and Van Trumps’ historic climb of Mount Rainier. The two quickly decided to also attempt the climb. They consulted with Stevens on logistics and then asked James Longmire to guide them. Being that it was late September, Longmire was reluctant to assist, insisting it was too late to do it safely. But believing that the men were advancing science, he eventually agreed to guide them.

On September 27th, Longmire, Emmons, Wilson and one other left Olympia with a pack of mules traveling up the Nisqually Valley. They arrived near the base of Mount Rainier four days later where they employed a couple of Indian guides from the Cowlitz Valley. They waited for King to meet up with them with a replacement barometer for the one they broke en route to the mountain. During this time Emmons and Wilson ran baselines for triangulation (mapping) in the Cowlitz, Nisqually, and Ohanapecosh river valleys. Longmire grew tired of plodding up and down glaciers. As a storm moved in, he as well as the Indian guides left Emmons and Wilson on their own. With limited provisions, the two hunkered down for four days as the storm raged.

Finally greeted with a window of good weather they began their climb of the mountain, and without haste knowing bad weather would soon return. They moved their camp to a spot above the Cowlitz River. Then on the morning of October 17th, they left camp at 4 a.m. for the summit. They headed up the Cowlitz Glacier to Gibraltar Rock. Dodging rock walls they made their way up a treacherous route. Emmons lost some of his gear including his overcoat before reaching the summit at 1 p.m.

Winds and freezing temperatures made it difficult for the two to use their theodolite (for surveying). Lacking a coat, Emmons fought hyperthermia and frostbitten hands. He retreated to a cave for warmth from a steam vent. They spent two hours on the summit before beginning the treacherous descent. Emmons was impressed with the long glacier that now bears his name. Lacking traction on his boots, he had to use the spiked tripod of his theodolite to steady his descent on the ice.

King never came with the barometer and the return of bad weather along with fatigue and exhaustion setting in forced the two to finish their Rainier exploration without getting accurate measurements of the peak. They retreated to Fort Simcoe on the Yakama Reservation arriving in tatters and exhausted. They were thought to have perished. Emmons’ climb did however result in some good information gathering including a map of the mountain’s higher reaches.

Emmons would go on to lead a distinguished life as a mining engineer with the USGS publishing many papers, books, and journals and leaving a legacy of contributions to the geological sciences. He became a founder of the Geological Society of America. In 1892 he was elected membership in the National Academy of Sciences. He was active in many other civic and academic fraternities. He died in 1911 one day shy of his 70th birthday.