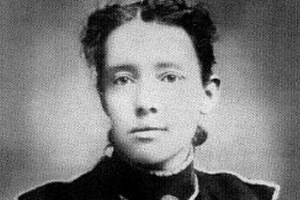 Famous for: In 1891 becomes the second woman to climb Mount Rainier after a failed attempt with Fay Fuller a year earlier. Being part of a successful climbing party that included 13-year old Susan Longmire; earning these two women the honors of being the second and third woman to summit the mountain.

On August 10th 1890, Fay Fuller a young school teacher from Yelm successfully reached the summit of Mount Rainier becoming the first woman to do so and securing her spot in the history books. Another young school teacher from Yelm, Edith Corbett could have shared that honor. But fate had a different plan when Corbett succumbed to queasiness in her stomach and had to abandon her climb that August day. Corbett however would return to Rainier the following year and successfully reach the summit becoming the second woman to do so. But in Rainier history and lore, her name would become nowhere near as familiar as Fuller’s.

Edith Corbett was born in California in 1869 to immigrant parents from Canada. In the 1880s Corbett came to Washington Territory with her father (her mother passed away in 1882) and younger sister settling in Tacoma. Corbett would become a school teacher and it was sometime in the late 1880s that she met Fay Fuller who was also teaching in Tacoma. Fuller eventually moved to Yelm to teach. Corbett did as well. It was in Yelm that she would become good friends with the Longmire family helping to familiarize her with Mount Rainier.

Like Fuller, Corbett became intent on climbing that mountain looming over the Yelm Prairie. In August 1890, Fuller and Corbett both joined climbing parties intent on summiting Mount Rainier. Corbett’s party was led by Elcain Longmire, son of James Longmire and included Elcain’s sons Leonard and Washington (who was only 12), and daughter Maude. They met up with Fuller’s party at Camp Muir. The next morning, August 10th, Fuller joined Leonard Longmire and three others for an attempt to reach the summit. Corbett became ill reporting queasiness in her stomach leading her to abandon the climb. Fuller went on to successfully reach the summit earning her the distinction of being the first woman to do so.

Upon descending however, Corbett was still determined to someday reach the summit of Rainier. The following year, she returned to the mountain to achieve her goal. On July 29th 1891, Corbett joined Elcaine Longmire, son Leonard and his 13-year old daughter Susan, and four others on a climb. Longmire led the party first to Camp Muir where they spent the night. On July 30th they climbed via the Gibraltar Rock route and successfully reached the summit. Corbett and Susan Longmire would become the second and third woman to reach the summit of Washington’s iconic mountain. They spent the night in the East Crater before descending on the 31st. Upon passing Gibraltar Rock, a rock fall gave them a scare coming dangerously close—but they managed to return from the climb in good health and shape.

Word of this climb soon generated interest in other women to summit Rainier. This spurred an ill-prepared climbing group which included four women to attempt to summit the mountain later that year. They failed. Another party including women didn’t fare well in 1894 either. However, later that month on July 19, 1894, Major Ingraham led a party of 14 which included three women successfully to the top of Rainier.

Corbett’s younger brother Laurence was inspired by his sister’s climb too. In early September of 1892 the 15 year old Corbett accompanied Leonard Longmire to the top of Mount Rainier. In the 1920s, Edith Corbett’s son Edwin would also summit the peak. And also in the 1920s, a young woman who would later become Washington’s first woman governor, Dixie Lee Ray reached the top of Rainier at 12 years old; beating Susan Longmire’s record as the youngest woman to climb the mountain.