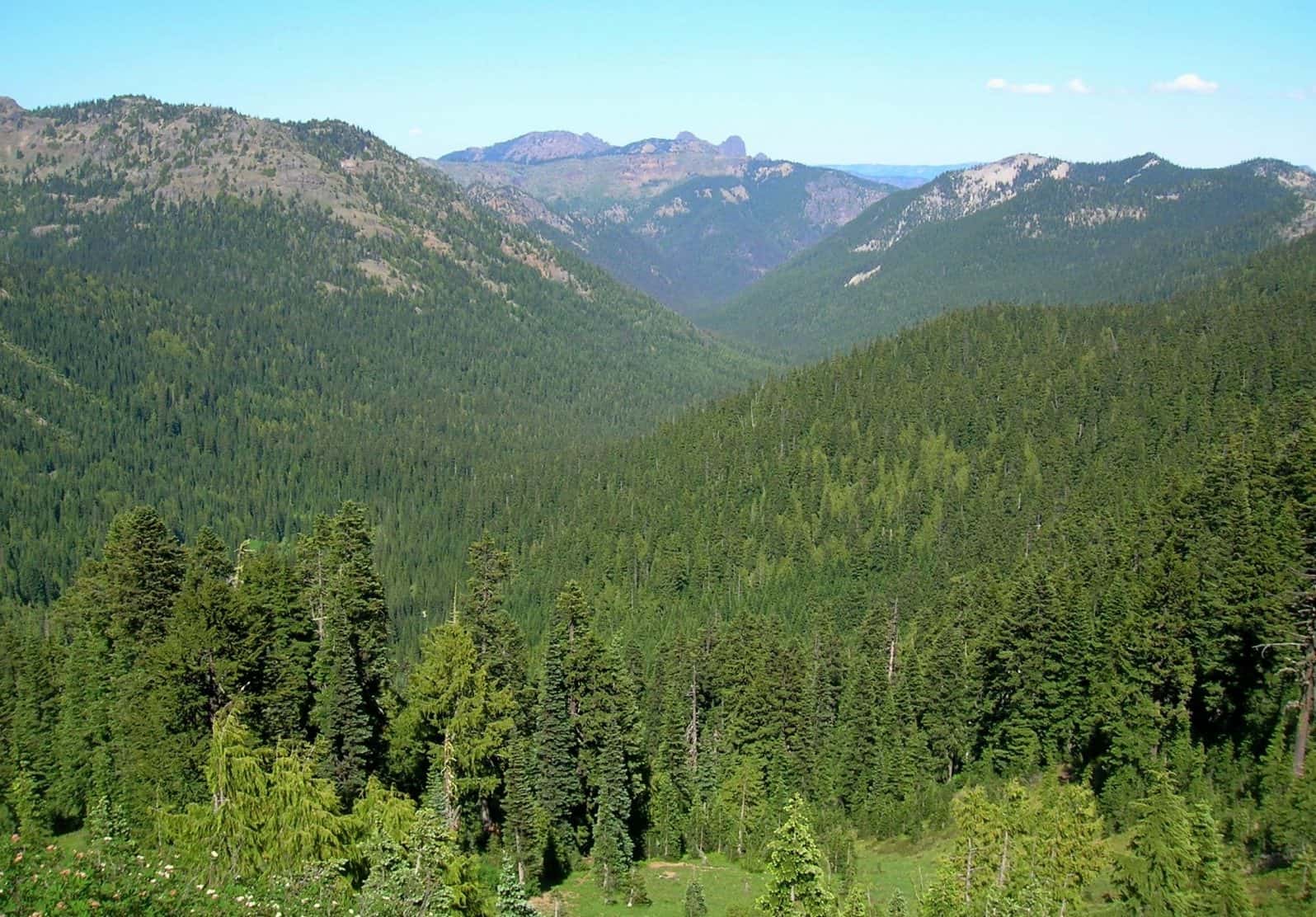 Ridge-top meadows to explore, shady forests to enjoy, and alpine lakes to enchant… hikers along the Pacific Crest Trail near Chinook Pass are in for a diverse set of treats. Chinook Pass is in fact a major entry point along this legendary trail running the length of the United Stated from Canada to Mexico. Lots of parking, maps and restrooms provide hikers with a few necessities as they start out on the trail.

Earlier this year we hiked south on the Pacific Crest Trail (PCT) to Dewey Lakes. This time we headed north on the PCT from Chinook Pass. On our August journey along this trail, we ended the day at Bear Gap near the Crystal Mountain Recreation Area. In September, we returned to the trail, this time passing Bear Gap, hiking further along the PCT to Crown Point. In addition to incredible scenery you’re apt to meet interesting PCT through-hikers such as the plucky French gal we met who had taken on the entire 2,600-mile trail as a retirement “project” – alone! And as an added bonus, in August as we hiked, it was early enough that wildflowers were still at their peak.

The first half-mile of the trail contours above SR 410 with views down to a green valley and back toward Chinook Pass. The trail passes the (unsigned) junction for Deadwood Lakes and enters the forest as it rounds a corner before coming to pretty Sheep Lake. Sheep Lake itself is an ideal destination for hikers with children or anyone wanting an easy hike or backpack. The lake is set within a natural park of meadows, wildflowers and subalpine evergreens.

After rounding the lake, the trail climbs to Sourdough Gap (6,422 feet) about 3.5 miles from Chinook Pass – one of the most scenic settings outside Mount Rainier National Park. As we climbed to the gap, we looked down on Sheep Lake and peaks to the south (Mount Adams and Mount Saint Helens). From Sourdough Gap, the PCT drops to a junction; continue straight (the trail climbing to the left is a way-trail to Crystal Lakes).

As we descended Sourdough Gap, our eyes were drawn to American Ridge across the valley and little Placer Lake below. A faint path through meadows leads to the lake; we suspect there might be sweet campsites tucked away near the lake, but didn’t take time to investigate.

The PCT continued, contouring below a dramatic ridgeline of steep meadows, rock outcroppings and precipitous cliffs. The ridgeline fascinated us; we were especially taken with what we dubbed “Do-nut Rock”, a boulder with a hole in it along the ridgeline. Faint spurs and game trails climb to what appeared to be potential scrambles on high points along the ridge; these are not for the casual hiker.

In August, the wildflower displays did not disappoint us with a variety of buckwheat, larkspur, phlox, Indian paintbrush, wallflower, Jacobs Ladder, columbine and more. Though we wanted to get to Crown Point we called it quits for the day at Bear Gap (about 5 miles from Chinook Pass), elevation 5,875 feet.

At Bear Gap junction, the directional signs are so weathered they are barely legible and blend in with the trees (the map is especially handy at this junction). From Bear Gap (N 46° 55′ 01″, W 121° 28′ 21″), day hikers can continue to Norse Peak, Bullion Basin, Henskin Lake and other trails near the Crystal Mountain area (study the map for details and possible one-way hikes involving car shuttles).

Hikers wanting a longer hike can continue along the PCT to Pickhandle Gap and Crown Point (6,194 feet) as we did when we returned to the trail the following month in September. Since days were now growing shorter and the weather changeable, we set a brisk pace to Bear Gap, occasionally stopping for breaks and photography stops we couldn’t resist. The vegetation was just beginning to display fall colors and most wildflowers had already gone to seed. Hellebore blazed like torches in meadows that were still predominantly green; those of us with cameras found it hard to keep hiking.

From Bear Gap, we continued with ups and downs to Pickhandle Gap (it is not signed thus) and then to Crown Point, another high point along the crest (our high point of the day at 6,194 feet). We dropped a little below Crown Point at a saddle (there is a signed junction here where hikers can pick up the Union Creek Trail No. 956).

Between Bear Gap and Crown Point we didn’t encounter hikers; rather surprising given this is such a scenic part of the Pacific Crest Trail. While some hikers would find Crown Point too far for a day hike, so much of the trail is the crest of the PCT; just about anyplace a hiker stops, they’ll find a view.

It had been a perfect day for this Seattle Mountaineers’ hike with overcast skies, occasional sun-breaks, a chill in the air and even a brief snow flurry. Suffice it to say it was the easiest “long” hike we’ve ever done.

Additional information: The recommended map for this hike is Green Trails Mount Rainier Wonderland Map 269S. The hike to Bear Gap is 10.5 miles round trip with an elevation gain of about 2,050 feet. It takes 4-6 hours.