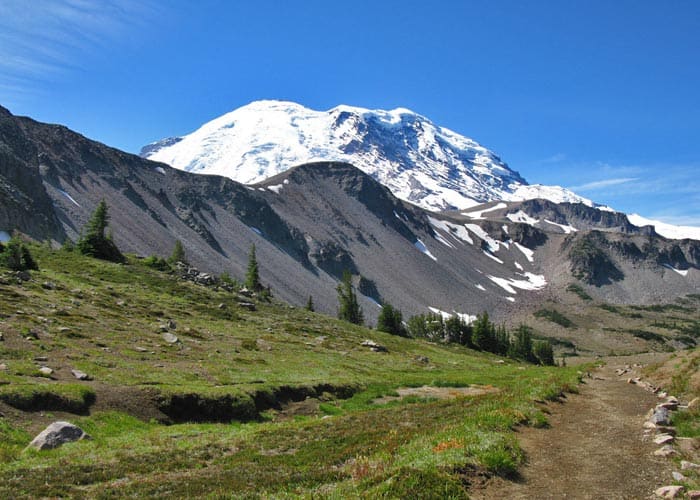 This is an upside-down hike. Unlike most hiking trails, this hike is mostly downhill except for a short stretch along the Sourdough Ridge trail. The hike begins at Sunrise; any hike that starts at Sunrise is bound to be spectacular.

Before you get to Sunrise, stop at Sunrise Point for views of Mount Adams (south), Mount Stuart and Glacier Peak to the north. On a clear day you may see Mount Hood, Mount Baker and Mount Garibaldi. Sunrise Point is also where the Palisades Lakes trail begins.

On a weekday, we found plenty of places to park at Sunrise (6,406 feet), weekends are another story so get an early start. The hike begins on a paved spur (at the west end of the parking area) and climbs a short distance to the popular Sourdough Ridge trail (6,767 feet). Hikers have options at this point: turn right for a short, scenic hike to Dege Peak or turn left (west) for Berkeley Park, Fremont Lookout, the Wonderland Trail and more.

In mid-July, the Sourdough Ridge trail is intensely beautiful with clumps of purple penstemon springing from crevices between the rocks and Mount Rainier directly ahead. The trail contours between rocky cliffs above and green meadows dotted with white snags below. On the way to Frozen Lake, take in views of the heavily crevassed Emmons Glacier and Little Tahoma Peak. Tahoma Peak is comprised of volcanic rock, infamous for what climbers call “rotten rock”. Bring your binoculars to follow the progress of climbers on Mount Rainier en route to/from base camp at Camp Schurman. After a short rise the trail descends to Frozen Lake (6,753 feet).

The Sourdough Ridge trail to Frozen Lake is apt to be bustling with hikers of all ages, shapes and abilities. You’ll find more solitude the deeper you delve into the park. Beyond Frozen Lake we encountered fewer hikers. Snow patches covered the trail in places; some of them pink. If you have never encountered watermelon-colored snow before, it is a natural phenomenon caused by watermelon algae. In July park rangers had placed wands across remaining snow patches; those will soon be melted if not already.

Note that near Frozen Lake the plants are smaller and hug the ground to conserve the warmth of the sun. Trees that look “young” are old; it takes a long time for anything to grow in this harsh environment. The white and pink heather looks tough but is extremely fragile and a single boot-print can kill it. It takes years to grow a small pot of heather in a similar environment.

As the trail loses elevation the tundra-like environs of Frozen Lake and Burroughs Mountain are replaced by glowing meadows as the trail descends into Berkeley Park. More flowers appear; magenta paintbrush, Jacobs ladder, white heather, pink heather, lousewort, lupine and cinquefoil. The wildflower displays are ever changing and profuse; they change from week to week. The Western pasqueflowers that bloomed a week before may not even resemble the same species as it goes to seed. When the flower goes to seed it resembles the tousled white hair of an old man; hence, it is sometimes called “Old Man of the Mountains” or “mouse on a stick”.

Lodi Creek announces itself with a waterfall (5,587 feet elevation) on the left-hand side of the trail. Here, the meadows are especially lush, especially near the creek. Welcome to Berkeley Park! In mid-July, golden glacier lilies carpet the meadows like fallen stars and the moss-embroidered creek is an exquisite shade of blue-green. Clumps of monkey flowers, not yet in bloom, sit atop small islands in the stream as marmots run about on marmot-errands. It is a joy to see marmots or hear their whistle – when you hear the first marmot whistle of summer you know that all is right with the world.

The trail continues to Grand Park but in mid-July, significant snow patches still covered the trail. We turned around well before Grand Park, retracing our route to Sunrise.

Rain or shine, the farm to table dinner will take place in the gardens from 6:00 PM-10:00 PM. The multi-course meal will be prepared by Chef Wendy Deaton of Wendy Simply Cooks. The menu features all seasonal, local ingredients sustainably grown by Washington farmers. Seating at tables arranged in parties of 2, up to tables that will seat groups of 6-8, so guests may dine with a date, family, or close friends. Let the farmers know your preferences when you purchase tickets. Tickets must be purchased in advance. Tickets are on sale now for the special event.

*menu items subject to change depending on availability 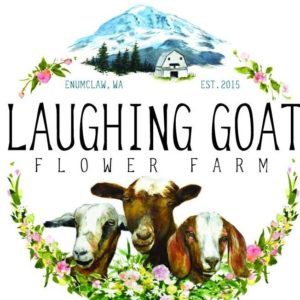 26aug10:00 AM8:30 PMThomasson Family Farm Sunflower PatchSee 5-acres of sunflowers, thousands of blooms in a variety of colors.

See 5-acres of sunflowers, thousands of blooms in a variety of beautiful yellows to deep reds  Admission to the 3rd Annual Sunflower Patch event includes one bloom from the sunflower

See 5-acres of sunflowers, thousands of blooms in a variety of beautiful yellows to deep reds

Admission to the 3rd Annual Sunflower Patch event includes one bloom from the sunflower field. Guests will be able to spend time in the field wandering a sunflower path finding many unique photo ops. Wagon rides for kids around the patch plus fun yard games and a “kids korral” with cattle roping, bubble table, chalkboard house, duck races, and slides. Picnic tables with umbrellas will be set up for guests to bring a picnic lunch to enjoy. Beverages and kettle-corn will be available for purchase at the farm’s snack shack. Stroll through beautiful blooms and make memories on the farm.

Each ticket to the Sunflower Patch comes with one free bloom. Additional blooms are available to purchase for $3 a stem. While supplies last, in the farm store visitors can purchase buckets and Mason Jars to then cut and fill sunflowers to fit in the container they purchased.

Sunset Tickets have an add-on option of a Fire Pit for up to 8 people.

Firepits are a $60 add-on. This option is available Fridays and Saturdays from 6:30pm to 8:30pm. *General admission tickets are required to add on an additional purchase of a fire pit. S’more kits are available for purchase. Please note, the “Kids Korral” will be closed during the sunset times, however yard games in the sunflowers will still be open.

Pre-Order a Charcuterie Board

Guests can pre-order a delicious charcuterie board to enjoy while strolling through the sunflower fields. Make sure you place your charcuterie board order at the time of booking your event tickets. Cost of each board is $18 each, plus tax.