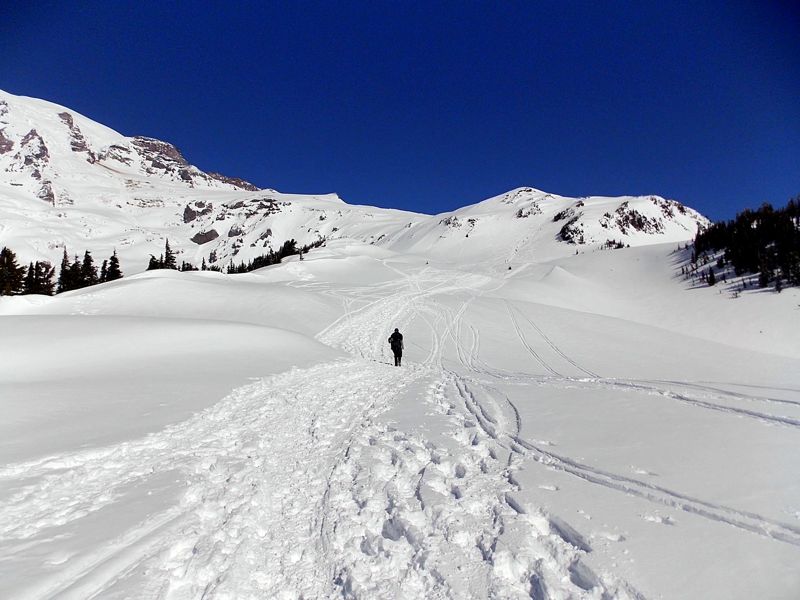 Sometimes you just get lucky. An open day on the calendar, sunny weather and blue skies conspire for ideal conditions for a snowshoe trip to Panorama Point at Mount Rainier. In summer it’s a world-class hike; in winter, a snowshoe, ski or snowboard destination when avalanche danger is low.

Luck was with us in mid-March after several days’ accumulation of fresh snow, followed by rain. Though avalanche conditions were rated as “considerable” we opted to snowshoe as far as we could while staying out of harm’s way. Plan to stop at the Longmire Visitor Center or at the Nisqually Entrance to the park for a handout that illustrates areas of avalanche concern. The map is user-friendly and depicts the safest approaches to various destinations. The map is especially useful for snowshoeing novices and/or those without previous avalanche awareness training.

Keep in mind, chains are required to be carried in your vehicle until May 1 each year, even if their use is not warranted. The road was dry and snow-free to Paradise on our visit though traction tires were still advised. Also unless you are lodging at Longmire or live nearby you’ll need an early start. Coming from Seattle it’s about a 6-1/2-hour drive round-trip.

We needed both traction devices and snowshoes on our climb. The snow was packed down and firm enough that traction devices were initially needed much of the way. As for “how” to get to Panorama Point, on a clear day follow the crowd (or break trail) on the packed-down trail. If it’s cloudy or the forecast indicates changing weather a GPS would be useful. Back in days of Yore snowshoers used map/compass skills to take a back-bearing in case of enveloping fog. A GPS makes this simpler. Another device used by those that frequent the high, snowy slopes where weather can quickly change are avalanche beacon (each person in the party carries an avalanche beacon in the ON position so if someone is buried by an avalanche their chances are better at being found).

There are signs you can look for if you don’t have such a device such as recognition of avalanche terrain; check out the Northwest Avalanche Center website and note that slopes without trees that help anchor snow in place are an indication of avalanches in the past. Other signs of snow instability are snow-balls rolling downhill or sno-donuts. These can be set off not just by humans but are a natural condition of instability in the snow, especially on steeper slopes without rocks sticking out of the snow or trees. If you doubt your ability to interpret avalanche terrain settle for something closer to Paradise such as Alta Vista (never snowshoe under Alta Vista) and if the weather socks in consider turning around and retracing your tracks back to the parking lot.

We wondered how many were playing hooky it being the best day to be outside. It was a weekday and there were quite a few others taking advantage of bluebird skies and the snow-carpeted terrain. A few were heading up to Camp Muir; a little too much for us to consider since we didn’t get to Paradise until late-morning. Currently the gate at Longmire closes at 5 PM so keep an eye on the time no matter where you are headed.

How can we coherently describe the beauty surrounding us as we made our way to Panorama Point? Starting out with traction devices on packed snow we stopped frequently – not only to rest – but to take photos of the majestic Tatoosh Range, Mount Adams and even Mount Saint Helens and the far-off Goat Rocks.

The deep blue skies made Mount Rainier stand out in sharp relief, like a white-paper cutout against a blue background. Add to that the sinuous curves of creamy mounds of snow glittering and sparkling with crystals, groves of subalpine trees with clumps of ice encasing their needles and depending on which way the breeze is flowing rime-ice forms abstract shapes on leeward branches and rocks.

Though it’s winter you will sweat as you work your way up the mountain; be prepared to change into a dry top when you get to your high point (wherever you stop) and put on a hat before you cool down. We also advise liberal use of sunscreen and wear sunglasses even on cloudy days. Don’t forget to lather sunscreen on your face, hands, cheekbones, nose, neck and ears.

We’d noted cornices on the ridge-lines and noted the growing prevalence of snow-donuts. With the sun blasting away and softening the snow we opted for lunch in a clump of trees a little below Panorama Point. Little clumps of ice tinkled on the branches of the subalpine-trees like miniature wind-chimes; suffice is to say it was beautiful. Far to the south we watched a line of clouds beginning to form but far enough away that we were in no danger. One should also keep an eye out for lenticular clouds that form on Mount Rainier (when Mount Rainier dons a cap). Though the surrounding terrain is clear and appears benign, winds inside the cloud can be raging and put climbers at risk.

On this day Mount Rainier was cloud-free so we took our time going down, making a short loop over toward the Moraine Trail with harrowing views of the Nisqually glacier below a screen of evergreens.

Come back in summer and re-visit Panorama Point when the meadows are a rolling sea of colorful flowers rather then mounds of snow; in summer you may find it hard to believe this is the same high point you worked so hard for on snowshoes or skis.

To get there: From the Nisqually Entrance of the park drive to Paradise via the Nisqually-Vista Paradise road to the Henry M. Jackson Memorial Visitor Center and parking (5,383 feet).