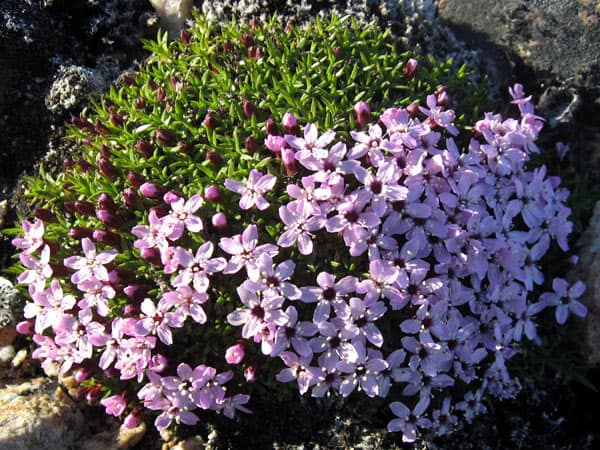 Moss campion is a low, ground-hugging plant.It may seem densely matted and moss-like. The dense cushions are up to a foot or more in diameter. The plants are usually about 2″ tall but may be as much as 6″. The bright, green leaves are narrow and arise from the base of the plant. The dead leaves from the previous season persist for years, and pink flowers are borne singly on short stalks up to 1 and 1/2″ long, but are usually much shorter. It usually has pink flowers and very rarely they will be white. The flowers are solitary and star-shaped. They are about 1.2 cm wide. They usually appear in June through August. The flowers are held by a calyx which makes it firm and thick. The flowers are pollinated by Lepidoptera and are hermaphrodites meaning they are both sexes. The sepals are joined together into a tube that conceals the base of the entire petals. The 10 stamen and 3 styles extend well beyond the throat of the flower. Its genus is closely related to carnations, and it is circumpolar. The stems and leaves are sticky and viscid to the tough, which may discourage ants and beetles from climbing on the plant. Its variety exscapa has shorter flowering stems. The other variety subacaulescens from Wyoming and Colorado has pale pink flowers all summer.