March of the Flowers: The Progression of Wildflowers at Mt. Rainier - Visit Rainier 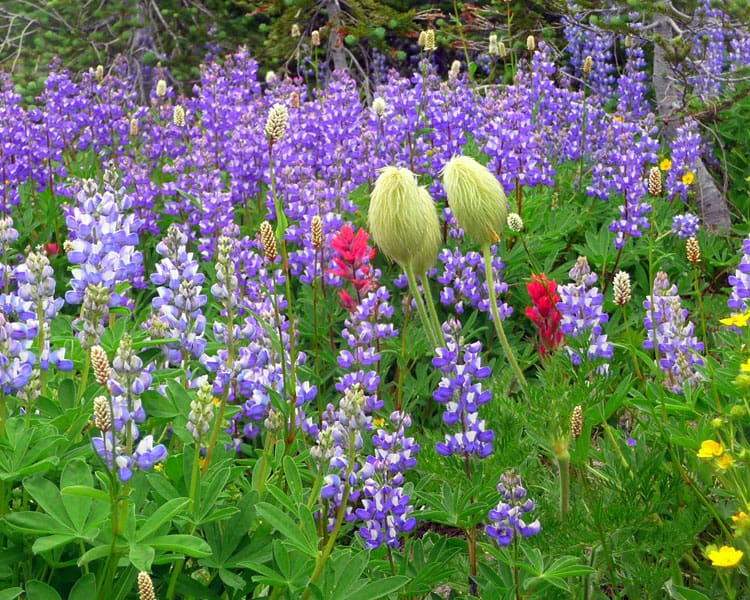 The first time you visit Paradise in summer you might think the heavens have fallen when you gaze upon those rolling hills and swales of subalpine parklands swaddled in avalanche lilies white as snow with a few golden glacier lilies scattered therein. Like us, flowers seek sunlight and warmth. Like us, they climb to the high country as the snow retreats. Mid-July is usually when the wildflowers at Paradise are at their peak; but don’t miss out on the floral progression of lower-elevation flowers as they bloom, from temperate forest to the alpine zone. .

Often the first flowers you’ll see are found in forested settings as early as March; Coltsfoot and skunk cabbage being two prime examples. Find them along road-sides leading into the park and especially along the Carbon River valley when the forest smells like it has just been washed by rain. Though the Carbon River Valley is at the lowest elevation inside the park Longmire won’t be far behind when flowers begin their bloom.

Let us begin in the dappled light of the forest. The Carbon River entrance of the park is a good place to start. The first plant to appear is the clumsy but endearing Coltsfoot; blooming even as you wend your way to the park entrance. Skunk cabbage with its warm, yellow glow can also be seen as you approach the park and especially along the Rainforest Nature Trail. Also called “swamp lanterns” they cast a warm light in contrast to the dark, tea-colored bogs and standing water from winter runoff.

Ferns will also be springing to life – sword ferns are abundant in the low-elevation forests year-round; bracken, lacy oak ferns and deer ferns will follow. As you walk the Carbon River Road note the pale, slender alders; a hardy native; they provides nutrients to the soil and is often the first tree to thrive in disturbed areas whether disturbed by Nature or Man. Though coltsfoot, skunk cabbage and trilliums usually bloom below 3,500 feet bear in mind there is no Maginot Line when it comes to when and where the flowers appear. It’s different every year – at higher elevations in a heavy snow year (think Paradise) you might find avalanche lilies and gentians sharing the territory.

In May look for Calypso orchids blooming along the Palisades Trail off State Route 410 east of Enumclaw. You’ll also find them at lower elevations inside the park, including the Rampart Ridge Trail at Longmire. Unlike the showy skunk cabbage these miniature orchids are easily missed unless you know when and where to look. This shy flower likes shade. You may find a sprinkle of orchids scattered near or under old-growth trees or perhaps hiding under a screen of vanilla leaf, another early bloomer.

Other flowers of the forest that bedeck lower elevations of Mount Rainier National Park and vicinity include trilliums, Solomon’s seal, mountain ash, huckleberry, vanilla leaf, foam flower, lily of the valley, Canadian dogwood (bunchberry), twin flower, pinesap, western coralroot, spring beauty and the infamous Devil’s club (don’t touch – sharp needles blanket the underside of the leaves as well as the entire plant and the needles are difficult to remove).

Corydalis is another fine flower of the forest, named Scouler corydalis to distinguish it from others. We’ve seen it on the Boundary Trail and other trails in the Carbon River valley. They bear a resemblance to bleeding hearts but grow much taller, 2 to 4 feet high.

As spring transitions to summer in the forest, coltsfoot, trilliums and skunk cabbage will be replaced by wood sorrel, bunchberry (Canadian dogwood) and foxgloves. Along the rivers and tributaries as summer progresses look for yellow or pink monkey-flowers ranging from the Carbon River to Panhandle Gap. Twin-flower, pine sap, Western coral root, Mountain ash, huckleberry are also prevalent in forested settings.

The best time of the year to follow the progression of wildflowers in subalpine regions of the park is in late-June through August. Look for avalanche lilies and glacier lilies emerging as the snow melts; buttercups and cinquefoil can be hard to differentiate as the flowers are similar (field guide suggested). Later in the season look for bistort, Arnica, lupine, Indian paintbrush, Sitka valerian. Call the park to find out when the flowers are near peak at Paradise and Sunrise (360-569-2211).

Burroughs Mountain (Sunrise) has its own ecological niche; the alpine tundra zone. Many flowers (such as lupine) are smaller there than in subalpine parklands. One of the last flowers to bloom is pearly everlasting; we’ve seen it as late as November at various elevations.

Burroughs Mountain provides an interesting mix of plants; sedges, perennial grasses and wildflowers. Look for saxifrages, Luetka (partridgefoot), buckwheat (pussy-toes), asters, blunt-leafed sandwort, prairie lupine (smaller than lupine at lower elevations), black crowberry, yellow heather (pink and white heather blooms at lower elevations). On a hike to Third Burroughs we were mesmerized but unable to identify fiery-red masses of a ground-hugging plant. Taking time to thumb through field guides we’ve learned that this plants leaves turn bright red in the fall (when we were there). The plant is Newberry’s knotweed – it blooms July-August and is of the Buckwheat Family.

There are many good field guides available: The most user-friendly is “A Pocket Guide to the Plants and Animals of Mount Rainier” by Joe Dreimiller. Another we can recommend is “Wildflowers of Mount Rainier” by Laird R. Books for hikers who want to hike AND botanize are “Washington’s Best Wildflower Hikes” by Charles Gurche, “Best Wildflower Hikes” by Art Kruckenberg, Karen Sykes and Craig Romano and “Plants of the Pacific Northwest Coast” by Jim Pojar and Andy MacKinnon. Last but not least is “Wildflowers of Mount Rainier and the Cascades” by Mary A. Fries (out of print – check second-hand bookstores).