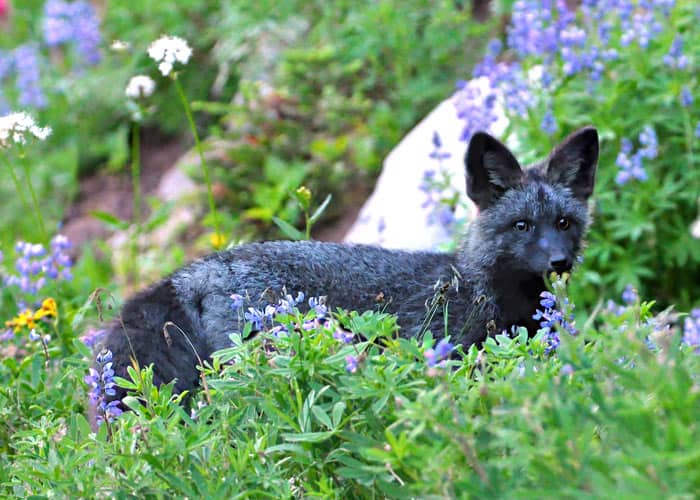 Both elevation and season determine just where you may see Mt. Rainier’s wildlife. Coyotes can be seen along Stevens Canyon Road and Box Canyon, as well as near the “goat overlook” below Longmire. Red foxes are seen at the picnic areas around Paradise and Longmire. Although they are called “red” they often appear gray or black in color.

Deer are frequently spotted year-round throughout the park. The deer seen on the west side of Mt. Rainier are Columbian black-tailed deer, and those found on the east side are Mule deer. The much larger elk tend to be more elusive. Look for them on the east side of the mountain in September. Mountain goats prefer the high ridges and cliffs and the best chance of spotting them is hiking Summerland, Panhandle Gap, or Indian Bar.

In the summer, ground squirrels, marmots, chipmunks, chickarees and pika are commonly spotted in the Paradise and Sunrise areas. Hoary marmots in particular, are meadow residents often seen from the nature trails near Paradise.

Cougars
Cougars, also known as pumas or mountain lions are also park residents. Although potentially dangerous, no human injuries have occurred in the park due to a cougar. They are solitary, nocturnal animals. If you encounter a cougar in the park, stop immediately and pick up small children. Do not run or crouch down. Maintain eye contact with the cat, stay calm and slowly back away. If the cougar becomes aggressive, become more assertive by shouting loudly, waving your arms and throw things. Report any cougar sightings to the park ranger as soon as possible. Click here for more information about cougars in the park.

Black Bears
Although unlikely, you may encounter a black bear at Mt. Rainier. Most people who see a bear in the wild consider it the highlight of their trip. Bears tend to avoid people. In most cases, if you give a bear the opportunity to do the right thing, it will. If you come across a bear in the wilderness, avoid it if you can, and give the bear every opportunity to avoid you. If you encounter a bear at close range, remain calm. Chances are you’re not in danger. If you stand your ground, talking to help ensure that it knows you are a person, the bear will soon leave. Please report all bear sightings to a park ranger. Click here for more information on bears in the park.

Choose Your Season
At Mount Rainier National Park fall is the best season to spot elk and deer. Summer into fall is the best season to view marmots, pikas, golden-mantled ground-squirrels and chipmunks. Mountain goats can be seen most of the year but stay high in winter. Black-tailed deer can be spotted in forested habitats. Elk spend summers at higher elevations then move down into forested river valleys. The best time to view them is in spring and fall during their migrations. Foxes are often seen near Longmire, Narada Falls and also at Paradise.

Go Early or Late
Wildlife can best be seen very early in the morning or late in the day at dusk.

Use Your Binoculars
Binoculars or spotting scopes improves your chances of spotting wildlife from afar without disturbing them.

Observe at a Distance
Don’t feed, touch or get too close to wildlife. Some wildlife can be dangerous if cornered or startled; bears, for example, especially with cubs.

Listen
Smell your surroundings. Most animals carry a specific odor and while it will vary by animal its scent will be more pungent than the vegetation around you. Listen to your surroundings: bird calls, the warning shrill of a marmot, the age-old bugling of elk in search of a mate, the cry of an eagle overhead, bickering ravens or the rat-a-tat-tat of woodpeckers as they hammer our their dinner or homes in the trees.

Watch for Evidence
Look for animal tracks and trees with shredded bark (bears and cougars “mark” their territory in this fashion). Bring a field-guide with illustrations of tracks to learn the difference between deer, elk and goat or cougar versus bear. The best places to look for tracks are in the snow and along streams or in muddy areas. Seeing – as opposed to looking – is an art. It’s surprising how much more you can see when you learn that difference. It takes a bit of practice.

Think Small
Don’t overlook the intricate universe under your feet and beside the trail. That mound of dirt might be an ant-hill; that colorful blob alongside the trail could be a slime-mold. Notice the winged, multiple-legged insects that surround us most of the year, ranging from butterflies to dragonflies.

Stay Safe
Always carry the Ten Essentials (add link). Get mountain weather forecasts before you head out. Remember all vehicles are required to carry chains inside the park between November 1 and May 1. Never rely on a cell phone to call for help, be self-sufficient. Making noise is sometimes appropriate when bears are close, especially if other hikers have encountered the bears in the area.

Editor’s Note: Outdoors Writer Russ Mohney died Aug. 31, 2009. The loss is staggering. His writing and insight into the outdoors of Southwest Washington was unmatched. The Chronicle continues to publish his popular column each week from his abundant body of work created throughout the past decade for The Chronicle based in Centralia, WA. This column was originally published Oct. 27, 2006.

The first hesitant snifters of snow fell on the mountains of the east county this week. There was snowfall down to the pass level at Stevens, Chinook and White passes, much to the delight of passers-by and returning vacationers.

There wasn’t much vigor to the late October snowfall; there seldom is. Still, it served notice that a transition to winter is beginning. To those of us who thoroughly enjoy the high and wild places, it is also time to go up to the hills and be witness to all that takes place. For me, there are two compelling reasons to spend a long day driving around the grand loop from Packwood over Chinook Pass, down the American and Naches rivers to U.S. 12, and then up the Tieton and over White Pass to get back to Packwood.

It’s a long day because the outing, properly conducted, requires dozens of stops at places like the Ohanapecosh, Morse Creek, American Forks, the Little Naches, Oak Creek , south Rimrock and Pinegrass Ridge before one even reaches White Pass. Each of those requires a quiet hike away from the trappings of a highway culture.

The first reason I wouldn’t miss this late fall adventure is the frenzied activity of the birds, small animals and big wildlife. Each has a specific, pointed purpose in life that the winter signals into action.

There is a sense of urgency about the Clark’s nutcrackers as they shuck ripened cones for the winged pine seeds that will carry them through another alpine winter. Spotted towhees are singing one last hurrah to low-bush cranberries and a few wizened huckleberries before they venture downhill for the winter.

Voles and mice are scurrying about forest openings and old burns to collect the grasses and seeds that will provide warmth and sustenance through the cold, dark burrow days. Hawks and owls have noticed the frenetic pace of the rodents and are putting away an opportune layer of fat for the days ahead.

Deer and elk have felt the first chill breezes and will soon begin slowly drifting down from their summer ranges to congregate and breed.

It is a magic time in the wildlife communities of the Cowlitz and Naches and Tieton.

The second – and no less vital – attraction of the great loop is the sheer exuberance of color that is spread about the landscape. There is an almost unbearable enchantment in the fire of vine maple at the margins of alpine fir or the electric evenglow of a quaking aspen along the little Naches.

Giant cottonwoods are laying down a carpet of gold, through which reddening deer brush and huckleberry are shouting for attention. There is a pleasant madness to the assault of color on our wondering senses.

While it is quite possible to witness this charmed busyness and brilliance from the seat of a pickup, the stops and short hikes I prescribe are, I believe, essential to complete the adventure. When you have seen such unthinkable grandeur from your own, private perspective, it matters so much more to the lasting pages of memory.

The annual excursion has been a part of my late-autumn ritual for as long as I can remember, and I am wholly certain my life would not be as full without such essential visits. As Aldo Leopold wrote, “I am glad I shall never be young without wild places to be young in. Of what avail are forty freedoms if there is not a blank spot on the map?”

I recommend a day trip – on the very next sunny day – over Chinook and White passes on the grand loop. Then you’ll have a hunch what ol’ Aldo meant!

Russ Mohney described himself as a “peasant naturalist.” He was a fourth-generation Lewis County outdoorsman. His book “A Simple Song: Recollections from a Backwoods County” is a collection of his favorite columns reworked to include a bit more detail from the original. The popular book can be ordered by calling The Chronicle at (360) 736-3311.