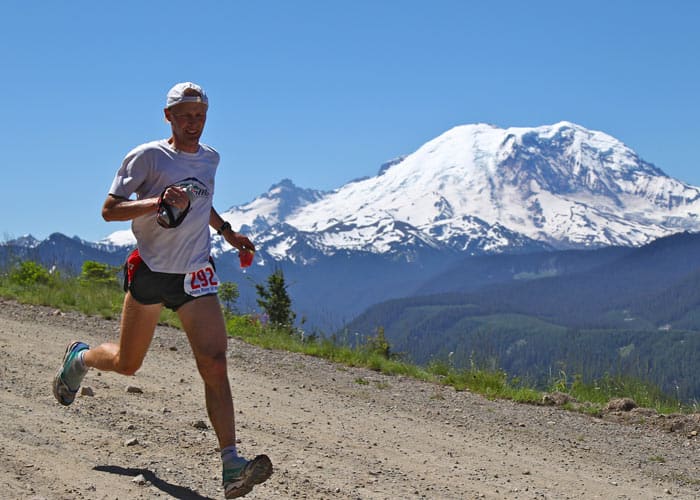 One of the most challenging Ultra runs in the country, the White River 50 Mile is also one of the most scenic. Staged in the Mount Baker-Snoqualmie National Forest just outside of Mount Rainier National Park, the course includes deep old growth forest, resplendent alpine meadows, wild river banks, gut-wrenching cliff sides, and plenty of stunning views of 14,411-foot glacier-covered Mount Rainier. Held on the last weekend in July, the run is also almost always blessed with sunny skies and pleasant temps.

While this race’s length alone makes completing it a challenge, it’s the course’s sustained climbs and descents that really make it a tough run. “Like ‘the Mountain’ itself, this race stands as an ultimate test of mental character and physical endurance,” states race director Scott McCoubrey. “Over its 50-mile distance the race course rises and falls a staggering 8,700 feet for a total elevation change of 17,400 feet,” he adds. “And this race features rolling terrain, ridge tops, Northwest forest, several sections of technical trails, and several demanding climbs and challenging descents.”

McCoubrey, a competitive ultra runner and former owner of the Seattle Running Company has been directing the White River 50 since 1993. He knows the course well having practically grown up at nearby Crystal Mountain. And he takes care making sure that along with his experienced group of race staff, which includes John Wallace (Volunteer Coordinator), Brian Morrison (Athlete Coordinator), and members of the Seattle Running Club-that the run is professionally administered and that participating athletes are given topnotch attention and support.

“Race numbers are limited to 400 of the toughest endurance athletes this country has to offer,” says McCoubrey. “Most competitors will be pleased just to complete the race distance,” he adds. “However, as an extra testament to supreme performance, $2,500 in prize money is offered.” Despite some lingering snowfields on the course in 2011, the race saw its biggest field ever that year. There were 281 starters (up from 238 the previous year) lined up that beautiful morning at the race start at Buck Creek Campground-and 244 of them (including this writer) crossed the finish line.

Back in 1999, a deep and lingering snowpack forced McCoubrey to change the course. But this year, he was determined to keep the original course open. Calling upon a handful of volunteers, they tiredly shoveled steps into the half-mile section of residual steep snow and leveled some of the sloping. They also placed guide ropes along the way. Come race day, other than a little sloshing, I found the snow section not problematic at all.

The race officials’ attention to mitigating problems on this snowy section of trail is just one example of how well this race is run. The entire course is well-marked and the eight aid stations are well staffed with enthusiastic folks quick to fill water bottles and hydration packs and to help dispense food and electrolyte tablets.

The race course consists of two big loops with sustained climbs that total over 8,700 feet of elevation gain. The race begins from the Buck Creek Campground with a short jaunt along the adjacent airstrip before heading out on the White River Trail through beautiful old growth forests. After about six miles of rolling terrain through cathedral forest, the course gets a little more interesting by heading up the Palisade Trail. Here the first big climb begins-and, while much of it is on a decent grade-there, is one section up a steep ravine utilizing a stairwell.

The course then breaks out of the deep forest to run along the rim of the Palisade providing breathtaking views of Mount Rainier and Sun Top and vertigo-inducing views of the White River Valley and the start line some 2,000 feet below. Then the course continues climbing to crest Little Ranger Peak before ascending some more, bursting out from the forest canopy to traverse meadows along Dalles Ridge. Here runners are granted a reprieve from climbing for the next several miles coasting along a mile high rolling ridgeline adorned with wildflowers and bear grass and exceptional views of Mount Rainier glistening in the background.

At mile 17 runners reach Corral Pass and then begin doubling back along the ridge before steeply descending via the Ranger Creek Trail. After a fast four-mile descent runners head back to Buck Creek before beginning the second loop which involves an eight-mile mostly up journey to 5,271-foot Sun Top Mountain. This is the make it or break it section of the race; for not only is the climb long but also the temperature is quite warm by this time. The course has a 13 hour time limit (14 hours if you take the early start) and runners must pass through the next several aid stations before designated cut off times lest they are removed from the course.

But for most runners who make it to flowered Sun Top at Mile 37, successfully finishing the race is usually within their reach. A mountaintop aid station staffed by enthusiastic volunteers under the gleaming watchful eye of Mount Rainier usually recharges race participants. That and the six mile descent down the graveled Sun Top road helps runners find their second wind before taking to the course’s final stretch on the Skookum Flats Trail.

The last six miles of the course along the roaring glacier-fed White River, however, are notorious for messing up many a participant’s pace. While all of the big climbs are over, more than a few runners falsely think the final stretch will be easy. It isn’t. Skookum Flats actually gains 500 feet and parts of the trail have runners hopping over roots and rocks. But for those participants who have trained well and still have plenty of fuel left in them-this section shouldn’t prove too difficult. And with plenty of old-growth giants lining the way and the roaring White River alongside the trail, attention can easily be diverted away from any aches and pains!

Runners finish back at the Buck Creek Campground where they are met by cheering spectators and their fellow competitors. And whether you were the first across the line like three-time winner Uli Steidl or the last to make the cut-off, all participants are treated liked champions. Most of the runners along with their family and friends hang out afterward for the post-race BBQ. And many head down to the White River for a dip to soothe aching muscles. A few camp out afterward tipping back cold beers around a fire sharing tales from this incredible trail run.

Training for and finishing the 2011 White River Run is among my proudest accomplishments. And while I continue to harbor warm feelings about successfully completing this race-it is my memories of bonding with my fellow runners and of all of the support given by the race directors and volunteers on that day that I cherish the most. Exceptionally scenic, incredibly challenging, and held within the shadows of Mount Rainier, the White River 50 Mile Endurance Run is truly a one of a kind event.

More information on the race can be found at https://www.facebook.com/whiteriver50/.