Walk the Trail of the Shadows Loop | Visit Rainier 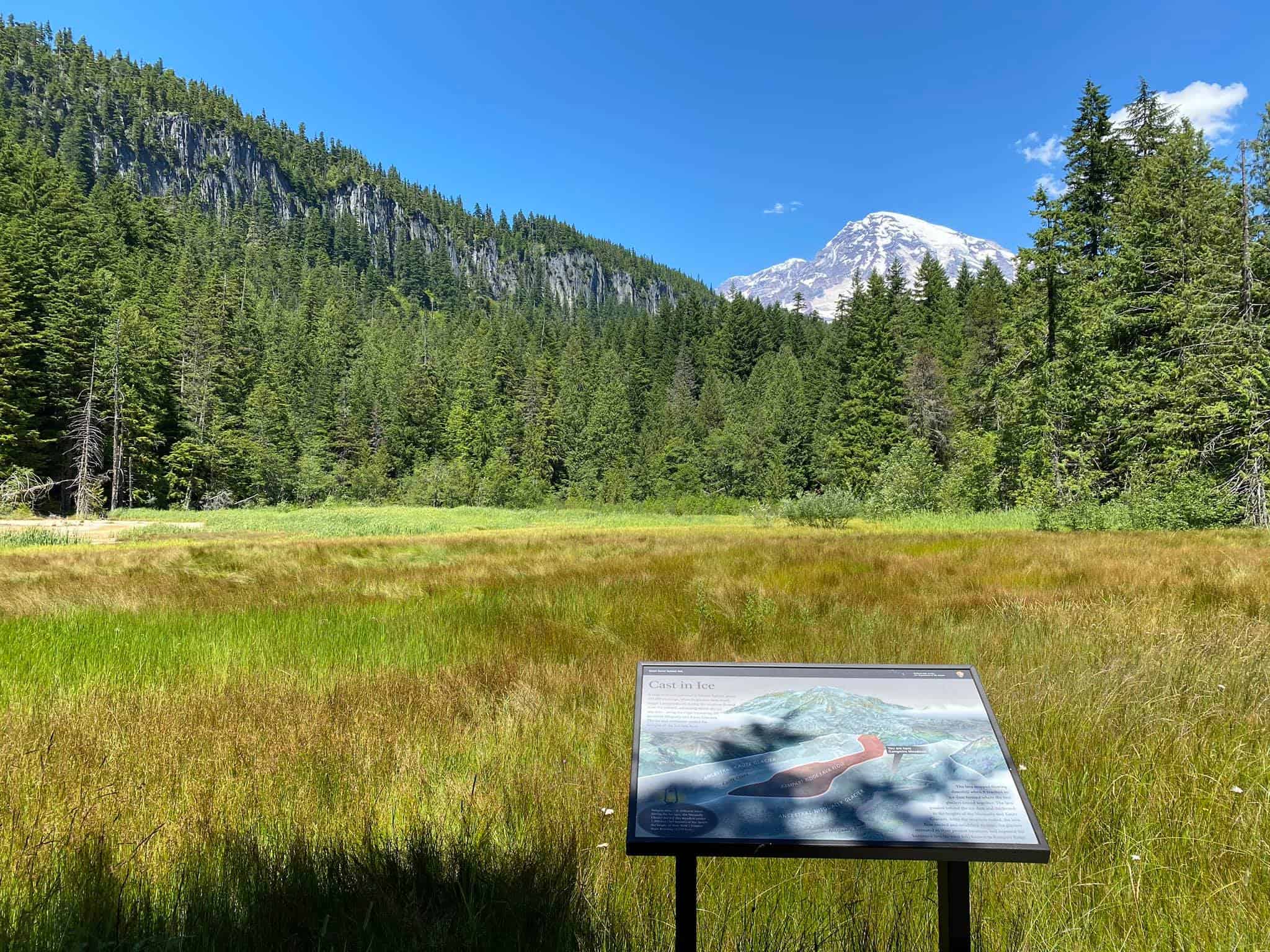 Trail of the Shadows is a short yet sweet, mostly level pathway through the forest.

Considered by many to be a perfect introduction to hiking for young families and those wanting to get outdoors without taking on a longer day hike. Though the fabled mineral springs discovered by James Longmire along this trail will not cure all your aches and pains, this walk is guaranteed to invigorate your senses.

This well-signed loop trail is easily accessed across from the Longmire National Inn on the main road – you can hike the loop in either direction (we hiked counterclockwise).

Hiking clockwise after a short distance, a path (left) leads to a view of a marsh; the colors of the meadow are almost psychedelic from the minerals in the springs. The main trail continues through a quiet setting of red alder, western red cedar and lodgepole pine before reaching the site of the Longmire Springs Hotel designated with an interpretive sign. The hotel was established in 1890 for travelers and others who came to soak in the hot springs (visitors bathed in cedar tubs that were sunken into the springs). Overall, forty-nine springs were discovered around Longmire with temperatures that ranged from 50 degrees to 85 degrees F.

Next, you’ll pass Soda Springs (right), another mineral spring enclosed by a ring of stones which is shortly followed by a view of beaver ponds (left) though according to the interpretive sign the beavers haven’t been seen for a while.

Just beyond is Longmire Cabin (the oldest structure inside the park) where you can walk inside to get a feel for a way of life that few remember. The cabin is small and with little room to turn around; in our age of spacious, oft-imposing homes, you may find it hard to imagine what it was like to live there.

Past the cabin is “Iron Mike” another spring bordered by rock walls giving it a primitive look, like a ruin you might find in a lost jungle. The water that trickles down the ramp from the spring is rust-colored, almost the color of molten lava. A cautionary note – do not drink the water as there are toxic substances in the water.

You’ll next cross a small creek (in spring the creek bustles with skunk cabbage). Another little marsh (left) leads to Medical Springs with a nice meadow view. A little further, note the Rampart Ridge trail junction that angles uphill to the right. Next, you’ll come to a travertine mound (left) designated with an interpretive sign pointing out a dun-colored mound. Travertine mounds are also formed by mineral springs but lack the reddish-brown color typical of mineral springs because there is very little iron in that particular mix of minerals.

Near the end of the loop, you’ll pass a few red cedar stumps (the Longmires logged there for building materials). Past the stumps, you’ll skirt a marshy area then cross two small outlet streams on rustic footbridges before the loop ends across from the National Park Inn.

Knowing a little bit about James Longmire and his family makes this loop even more interesting. The Longmire family made a lasting impression on Mount Rainier National Park – wouldn’t you love to travel back in time and walk with him? I know we would. Longmire’s wife, Viranda, ran the hotel and her huckleberry pies were legendary. While it might not have been her intention we can also thank her for naming Paradise. Her enthusiastic reaction upon seeing Paradise the first time was her exclamation that the setting was beautiful enough to be Paradise and the name stuck.

James Longmire was adventurous – he led a wagon train over Naches Pass in 1853, just one example of his adventures and explorations. After Longmire climbed Mount Rainier (1883) he discovered the mineral springs and believed the minerals were “good medicine.” Another version of Longmire’s discovery is that the springs were discovered by his thirsty horses.

It didn’t take long for the hot springs to catch on once they’d been discovered. By the 1890s, periodicals and newspapers were writing up the beneficial effects of hot springs which attracted many visitors. Hot springs remain popular as evidenced by the enthusiasm of people who frequent them; whether or not you believe in the benefits of mineral hot springs, it sure feels good to soak in one.

When James Longmire died in 1897 Elcaine (his son) and Benjamin (his grandson) took over the hotel and other enterprises after the land surrounding the Longmire claim became Mount Rainier National Park in 1899. The original hotel burned down in 1910; though the property remained in the family’s hands until the late 1930s when the National Park Service bought their mineral claim.

Q: Is there any place to stop and sit along the trail?

A: Yes, there’s a bench by the meadow.

Q: I walk slowly and use a cane. What is the trail surface like? Other than the one bench is there any other place to stop and sit along the way?

A: There’s one bench. While you can enter the historic cabin there is no place to sit inside. The trail consists of a variety of surfaces, gravel, dirt, a wooden bridge, and a boardwalk. In case it’s helpful we thought we’d mention there is also a section with some tree roots along the trail.