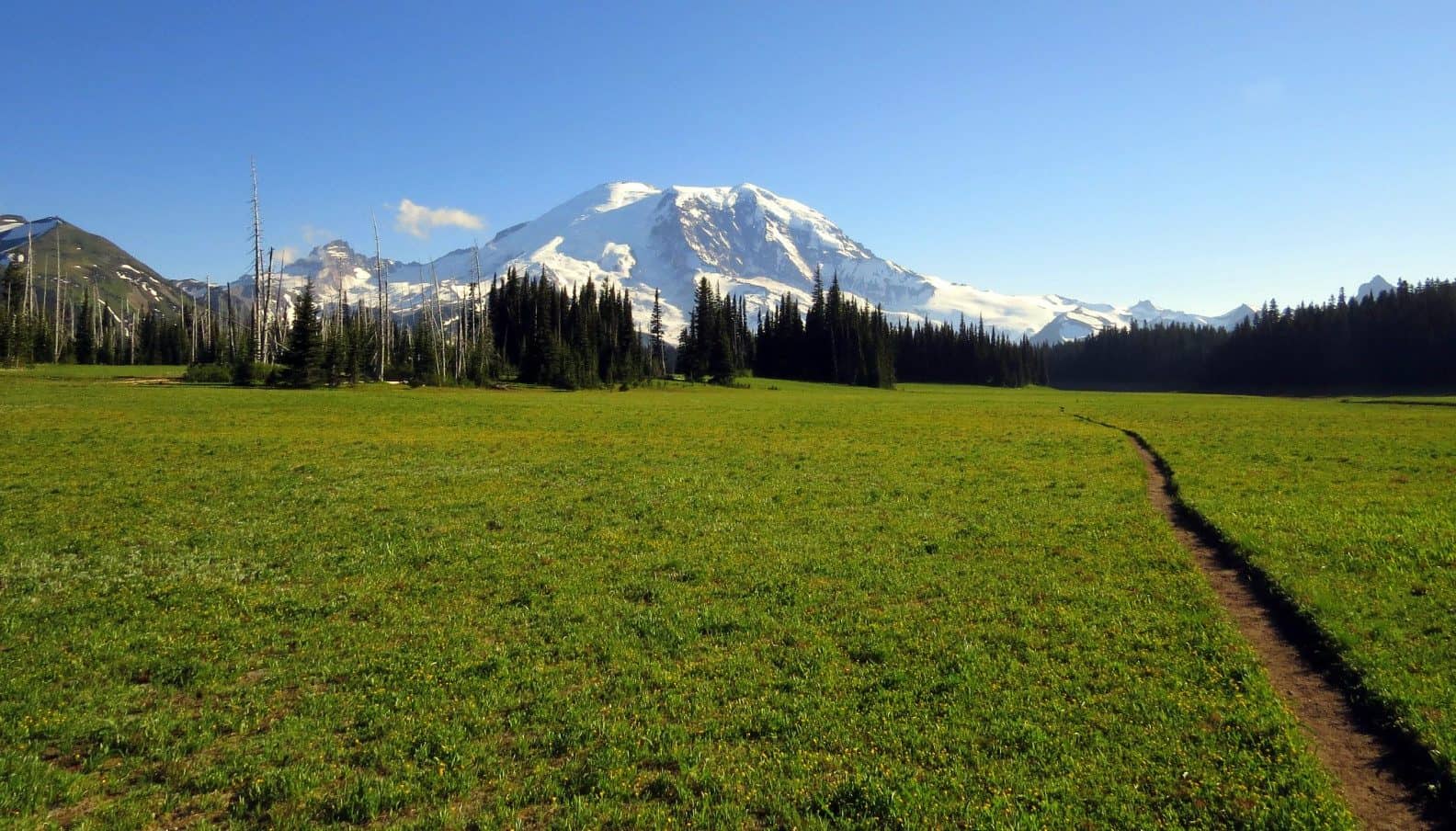 Have you ever put on a pair of snowshoes and been yelled by a skier because you “messed up their tracks”? Have you ever encountered horseback riders on the Pacific Crest Trail and not known whether to stand on the up-side or the down-side of the trail? Have you ever crossed a meadow for a close-up photo of a wildflower? With folks recreating more than ever before “trail etiquette” becomes a necessity.

In the past there was little call for “trail etiquette.” My Dad told of an expedition he and friends took into the Olympics in the 1920s. They rode horses to a pristine lake, used boughs for insulation from the ground, made a roaring campfire and tacked pancakes to trees and shot at them. Unthinkable today!

Such outings as my Dad described would be not only be unimaginable in today’s environment but illegal, given the impact on the land. When outdoor clubs such as The Mountaineers, The Sierra Club and The Mazamas formed in the early 1900s, there wasn’t the need to reduce party size as there is today.

While a party-size of 60-70 would also be unthinkable today, it wasn’t unheard of in the early 1900s. Even so, when The Mountaineers organized in 1906, they developed guidelines for being in the mountains: “To explore and study the mountains, forests, and watercourses of the Northwest; To gather into permanent form the history and traditions of this region; To preserve by the encouragement of protective legislation or otherwise the natural beauty of Northwest America, To make expeditions into these regions in fulfillment of the above purposes; To encourage a spirit of good fellowship among all lovers of outdoor life.” The phrasing may be a little turgid, but those early rules formed the basic structure of rules we adhere to today.

Climbers, too, developed a code they live by, much of which applies to hikers. While belaying and roping up are not a part of hiking much of the climbers code does apply to us. Whether hiking or climbing as part of a group, keep the party together, respect the leader, never climb or hike beyond your ability, never let judgment be overruled by desire when choosing the route, carry at all times the clothing, food and equipment you need. Solo hiking is a whole other ball game; if you do so leave your hiking itinerary with a responsible party and let them when you will return.

Last summer when hiking at Paradise we met an enthusiastic hiker wearing a “Don’t Be A Meadow Stomper” button. Park rangers are handing out buttons and sometimes issuing a fine to hikers who step off established trails, especially on more popular trails such as trails at Paradise and Sunrise. Signs, placed at appropriate intervals and at the end of switchbacks remind hikers – again and again – not to cut shortcuts and stay on the trails.

We should respect our mountains but such respect should extend to other trail users whether they be on foot, on a mountain bike or a horse. However, horses are only allowed on the Pacific Crest Trail where it runs through Mount Rainier National Park and the Laughingwater Creek trail. Horses are not the problem: we are and often unknowingly.

Who has the right-of-way? Generally, hikers traveling uphill have the right-of-way. Why? One reason is that hikers heading uphill may have found their uphill pace and it’s harder for them to stop than for descending hikers. But not always – some hikers prefer short breaks while climbing a steep trail and will welcome the opportunity to rest and let hikers pass them, including hikers behind them hiking at a faster pace.

Dogs are not allowed inside Mount Rainier National Park but are allowed on other land-management agencies’ land.

Rules may differ by region so check with the appropriate land agency before you set out with your pooch. Where dogs are allowed, they should be leashed and under voice control (if you hike with a dog it is also essential you clean up after them – bring doggy bags to dispose of feces and pack them out.). Unfortunately not all pet owners play by the rules. I can’t count the number of encounters I’ve heard where unleashed dogs run up to hikers as their owner exclaims “It’s okay, he won’t bite. He’s friendly!” Most dogs won’t bite unless provoked, but some hikers are not comfortable around dogs, especially an unleashed pet.

Do not disturb wildlife – this is true year-round but especially during calving season or nesting season.

It may be tempting to sneak closer to wildlife for a photograph but they are not as eager to see you as you are to see them. If you persist, they will likely flee and getting too close (bears with cubs) could even provoke an attack.

Leave artifacts where you find them. This rule also applies to flora and fauna – do not pick wildflowers or remove rocks inside the park.

Some kids get a kick out of rolling rocks off trails, unaware of other hikers on switchbacks below them. While that may tie in more with safety issues than “good manners” be wary of rockfall – whether deliberate, caused by clumsy hikers or even mountain goats.

Don’t feed wildlife or leave scraps of food behind – orange peels may seem “natural” but they take a long time to biodegrade and are unsightly. Orange peels and peanut shells left on trails or at viewpoints is not a wilderness experience. Speaking of food, do not feed wildlife; nature provides food for birds and animals. Not only is our food bad for them, but they lose their natural fear of humans and that also puts them at risk. When they rely on us for food, they lose the skills provided by nature.

It would be nice if bodily functions would cease when we hike but alas, they don’t. When you have to “go” use a privy when available. There does seem to be an unwritten law of hiking that when you need one the most, there won’t be one available. Find a lonesome spot off-trail at least 200 feet away from water, and dig a cat hole (carry a trowel for this purpose) and cover your deposit with organic matter. Think like a cat! On snow, carry a plastic bag for feces, double-bag and pack it out. Pack out your toilet paper too – a paper “flower” beside the trail is not a thing of beauty.

Most hikers you encounter on the trail will be friendly; a “hello” or “how’s it going?” is sufficient. Sometimes you’ll meet a hiker who may not welcome a greeting; if so, continue hiking and let them go by.

As the population continues to expand, applying these rules is essential – if you don’t follow these simple rules, more-rigid rules may come into play and some areas that we love today may become off-limit tomorrow. Even now there are cordoned off sections near lakes where existing campsites have been closed so the terrain can recover – from our impact.

You may think you don’t leave a trace but no matter how careful you are – you do!