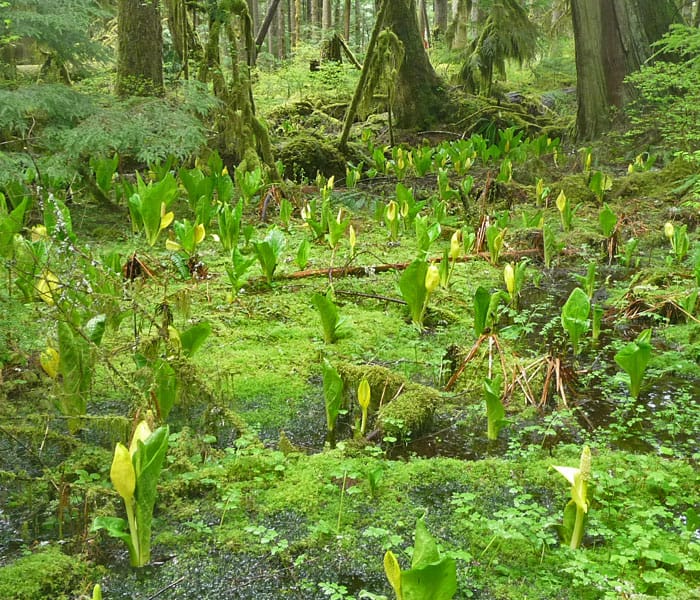 Treat yourself to a charming walk along the Rainforest Nature Loop, a short nature trail just inside the Carbon River entrance of the park. It’s ideal for families with small children and those seeking an easy walk in the rainforest. When hikers think of rainforests, many discount inland areas. However, you can experience the lush rainforest at the low-elevation areas of Mt. Rainier’s Carbon River Valley. The rainforest loop provides a textbook example of what a rainforest looks, feels and smells like.

Approach the loop as appetizer or a feast depending upon how much hiking you want to do. On our recent visit, there was only one other hiker at the trailhead; a young man preparing to head up the West Boundary Trail which takes off from the Rainforest trail. An experienced hiker, he planned to go as far as he could go given depending on the weather, his energy and the amount of snow at higher elevations. The Boundary Trail starts from the Rainforest Nature Trail and is signed; the trail climbs to waterfalls at 1.3 miles and continues on to Alki Crest.

Though it still felt like winter on this April day, spring had come to the Carbon River Valley. As the young man plummeted up the trail into the world of ice and snow, we dawdled, dazzled by the warm glow of skunk cabbage that bordered the trail and the glittering patterns the rain-drops made on the plants fat, waxy leaves.

The trail skirts boggy areas on boardwalks and foot bridges; even when it’s not actively raining this is a wet place. Every leaf glistened with starry rain-drops, root balls with dirt still clinging to their exposed roots lie upended. Later in the season flowering vines will trail from the roots to the water-saturated ground and plucky huckleberry will spring to life from moldering stumps and nurse-logs.

Interpretive displays along the boardwalk point out plants and other points of interest to those who are first-time visitors to the rainforest. Not only is this trail ideal for families with children, even adrenaline-driven mountaineers on their way to Alki Crest and beyond, delight in the quiet splendor of the rainforest on their way to higher realms.

Most trees in the rainforest are coniferous – Douglas-fir, Sitka spruce, Western hemlock and Western red cedar predominate with an under-story of shrubs and moisture-loving plants. You’ll also see nurse-logs, fallen trees that provide nutrients to seedlings and shrubs as they decay.

You’ll see plenty of moss along the trail. Botanically speaking, mosses are non-vascular plants – since they don’t produce flowers, fruits, cones or seeds they absorb water and nutrients through their leaves. If you look closely, you’ll see their spore capsules – they appear beak-like and are borne aloft on thin stalks (see photograph). Close up the spore capsules look like alien invaders. Keep in mind there are field guides about mosses and lichens that go into much more detail – hence, a field guide is suggested if you plan to spend time here.

In late April, skunk cabbage was at its peak. Skunk cabbage (Lysichiton americanus) is a native plant and is so named because of its persistent, “skunky” odor. Its pungent odor serves a purpose – it attracts pollinators including beetles and scavenging flies. Its leaves are the largest of any native plant in our region. Its flowers might not be your idea of what flowers look like – these flowers are produced in a spadix contained within a large, yellow-green spathe (see photo). They are some of the first flowers to appear in spring, so eager to bloom you’ll often see the plant poking up through snow. Its stem produces heat which helps melt the snow around it.

There are other sights to see near the trailhead, including an enormous root-ball just between the ranger station and the Carbon River. A short, rough path behind the ranger station leads to the riverbank where you can look upriver or across to views of Burnt Mountain and other high points still encrusted with snow. Want more? Continue walking the Carbon River Road as far as time, energy and conditions allow for more views of old-growth forest, early wildflowers in spring and the scenic river.

To get there: From Wilkeson drive to the Carbon River entrance of Mount Rainier National Park and continue to the end of the road, facilities, campground and trailhead parking. Park entry fee (or pass) required. The map is Green Trails No. 269S Mount Rainier Wonderland.

Additional information: For road and trail conditions call Mount Rainier National Park at 360-569-2211 or visit their website at www.nps.gov/mora