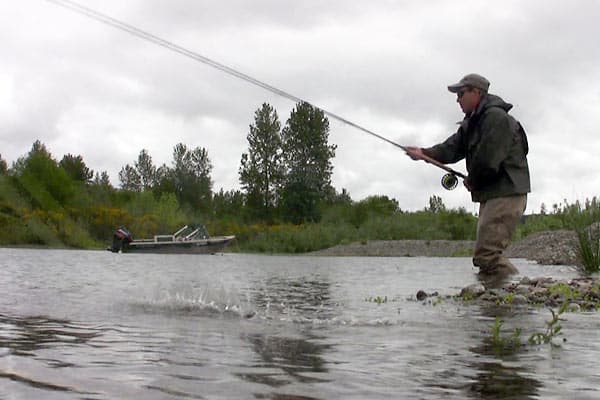 Fly Fishing is, more or less, about using a fly rod and a fly line to make precise casts in hopes of landing a fish.

In fly fishing, fish are caught by using artificial flies that are cast with a fly rod and a fly line. The type of cast used when fishing varies according to the conditions. The most common cast is the forward cast, where the angler whisks the fly into the air, back over the shoulder until the line is nearly straight, then forward, using primarily the forearm. The objective of this motion is to “load” or bend the rod tip with stored energy, then transmit that energy to the line, resulting in the fly line being cast for an appreciable distance. Other casts are the roll cast, the single- or double-haul, the tuck cast, and the side- or curve-cast.

Modern fly fishing is said to have originated on the fast, rocky rivers of Scotland and northern England. The conditions on rivers in Scotland, the river Spey in particular, are strikingly similar to those found on Pacific Northwest rivers. With so many trees and shrubs growing right to the waterline, there isn’t much room for a backcast. So a new cast, the spey cast, was created and is now one of the most popular and the most efficient method of fly casting. The cast is characterized by ribbon-like motions of the fly rod and fly line, creating loops upon loops of line, building up length and momentum for a single cast, often traveling 90 feet effortlessly. With the level of difficulty and the sheer gracefulness of a successful spey cast, the sight is truly one to behold.

Fly fishing is about more than just catching a fish. The Mount Rainier area provides more water than anyone could fish in a lifetime. Within a relatively short distance of Seattle of Portland, you can be in an area that is completely devoid of other people, creating the perfect solitude for the art and pleasure of fly fishing.

For more information about fly fishing in the Pacific Northwest, visit www.northwestflyfisherman.com.