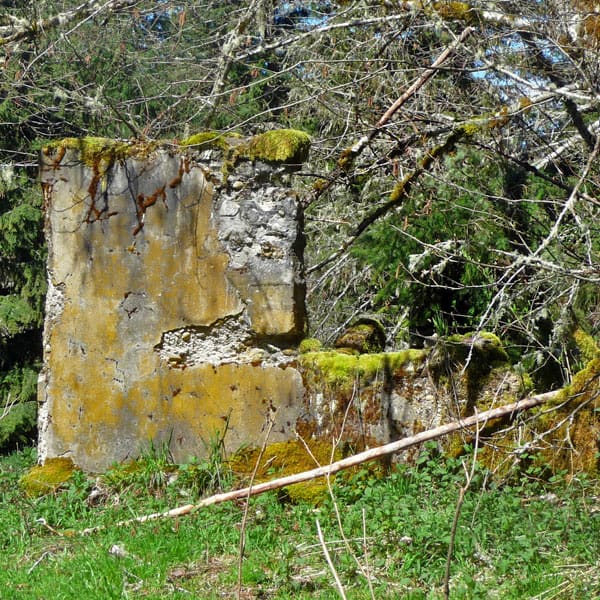 Some hikers can’t resist exploring ghost towns — we’re no exception. We were initially bitten by the ghost town bug in the early 1980s, our first hike a visit to a historical townsite in the North Cascades. Today when we hike trails inside/near the Carbon River entrance of Mount Rainier National Park, we often stop in Wilkeson before going home for a bit of historical ambiance. Though Wilkeson is not a ghost town there are old structures there and coke ovens that date back to the days when Wilkeson was solely a coal-mining town as were the nearby towns of Carbonado and Burnett. Other mining towns, such as Old Alder or South Willis have gone the way of dinosaurs but for blackberry-covered artifacts or an occasional moss-slathered wall that entices one to ask “What was that structure? What purpose did it serve?” Too many historical towns in the region have faded to mere whispered memories between old-timers that once knew them.

The easiest ghost town to explore is Melmont. The town dates back to the early 1900s when a subsidiary of the Northern Pacific Railway (the Northwest Improvement Company) opened the Melmont coal mine. The coal was sent up the rails to Carbonado where it was processed. Though little remains today, Melmont once bustled with activity as the town included a saloon, train depot, post office, schoolhouse, hotel, and tidy rows of cottages used by the miners.

By 1915 the town was beginning to slip away – the post office closed and a few years later, the Northwest Improvement Company ceased operations though a few mines were opened by another mining company, the Carbon Hill Coal Company. All the mines had closed by the early 1920s and tragically, a forest fire destroyed most of the town that remained.

Spring, fall, and winter are the best seasons to explore ghost towns before the vegetation leafs out and obscure the artifacts that remain. The approach to the railroad grade and Melmont is from the Fairfax Bridge (originally named the O’Farrell Bridge). Today the bridge, once the tallest in the state, is listed on the National Register of Historic Places.

In April, shafts of soft sunlight filtered through the forest canopy, heightening the shades of green in the vegetation that bordered the railroad grade, and skunk cabbage sported a cheerful yellow glow in boggy areas along the way. Where the light is dim you’ll soon see why skunk cabbage is also called “swamp lanterns.”

Almost immediately you’ll notice a mossy wall (right), part of a retaining wall utilized by the Northern Pacific’s railroad grade. You can venture closer for a better look and peeks to the Carbon River far below.

A bit past the retaining wall you’ll come to a hard-to-miss stone structure (left), an old shed used by the railroad to store dynamite (no dynamite remains so it’s safe to venture inside). The walls are still intact though the roof is gone.

A little further along you’ll come to a split in the trail. The path (left) climbs to the foundation of the Melmont schoolhouse; a sweet spot for a break on a sunny day. Enough of the structure remains that with a little imagination you can visualize what the schoolhouse might have looked like.

It was sunny so we sprawled on the grass nearby for a leisurely lunch and listened to the silence. Like moss? You’ll love the schoolhouse. The moss that creeps over the foundation is thick, springy, and deep. A few gnarled fruit trees are scattered nearby.

After lunch, we retraced our route back to the grade and continued hiking. Not far from the split in the trail, the site of Melmont comes into view below (right), about a mile from the Fairfax Bridge. The site is flat and about the size of four football fields. A couple of paths drop down to the site for further exploration.

You can see why the town took root here in this sunny spot that becomes a meadow in summer, situated perfectly between the railroad grade and the Carbon River. Other reports from those who have explored these sites indicate some foundations of the Melmont Bridge remain though we did not come across them. It’s not far from the meadow to the Carbon River. Rather than looking further for the Melmont Bridge ruins, we continued on the railroad grade until we ran out of time.

While the walk to the Melmont schoolhouse and the townsite is easy, the trails can be muddy as the railroad grade is also used by ATVs. Sturdy boots and gaiters are recommended, especially during the rainy seasons.

From Wilkeson/Carbonado continue on route State Route 165 toward the Carbon River entrance of Mount Rainier National Park (visit mid-week if possible, parking is limited). Drive across the Fairfax Bridge and note a small parking spot on the left side of the road. Park there, walk back across the bridge and look for a short, steep path on the north side of the bridge that descends to the railroad grade. After admiring the supports/structure of the bridge and seeing it’s much stronger than you’d imagine, turn left (south) onto the grade and start walking. When (or if) you encounter private property signs do not trespass.