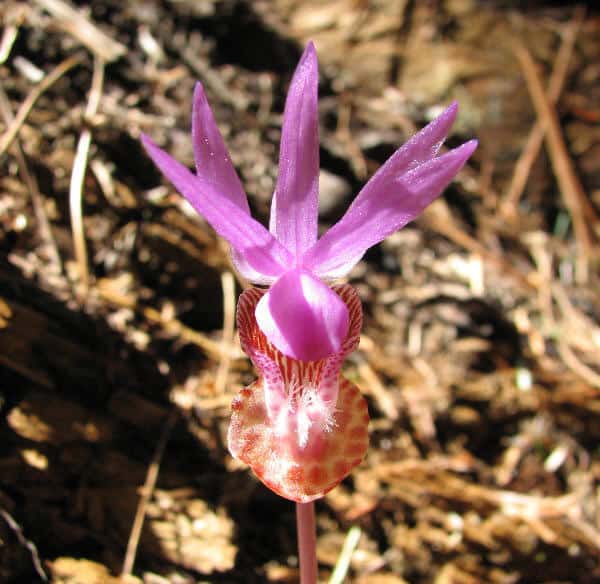 Calypso orchids are typically 10 to 14 cm in height. Their little purple blooms can be a pleasant sporadic sight on hiking trails from late March onwards, though in the more northerly parts of their range they do not bloom until May and June. The plants live no more than five years. This species’ range is circumpolar, and includes the western states and most of the most northerly states of the United States; Canada; Scandinavia (northern Sweden and Finland), the northern part of European Russia; eastern Siberia; and Japan—see external links for map. Four varieties are recognized: var. americana and var. occidentalis, which are found in North America, respectively east and west of the Sierra Nevada ranges; var. bulbosa in most of the Eurasian range; and var. japonica in Japan. Although the calypso orchid’s distribution is wide, it is very susceptible to disturbance, and is therefore classified as threatened or endangered in several U. S. states and in Sweden and Finland. It does not transplant well[1] owing to its mycorrhizal dependence on specific soil fungi. The corms have been used as a food source by North American native peoples. The Thompson River Indians of British Columbia used it as a treatment for mild epilepsy. At least near Banff, Alberta, the calypso orchid is pollinated by queen bumblebees (Bombus (Pyrobombus) and Psithyrus). It relies on “pollination by deception”, as it attracts insects to anther-like yellow hairs at the entrance to the pouch and forked nectary-like structures at the end of the pouch but produces no nectar that would nourish them. Insects quickly learn not to revisit it. Avoiding such recognition may account for some of the small variation in the flower’s appearance.