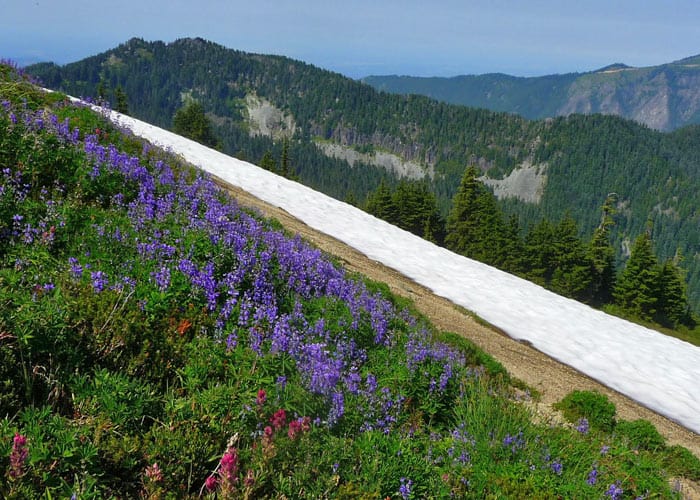 NOTE: Howard Peak is not accessible once Mowich Lake Road closes for the season.

The little-known class 2 scramble to Howard Peak (5,688 feet) offers diverse terrain from steep hillside climbs to inspiring ridge walks. It is well worth the effort. A recent hike to nearby Eunice Lake and Tolmie Peak lookout had whetted our appetite to return to scramble Howard Peak, which, as the crow flies, is only about a half mile from Tolmie.

We started from Mowich Lake and hiked toward Tolmie Peak; in mid-September, the flowers were still in bloom. With the late snow melt this summer, Eunice Lake was still partially frozen in July.

From Eunice Lake, we climbed to a saddle on the Tolmie Peak trail below the lookout where we looked for a climber’s path. We could see Howard Peak from the saddle and while there wasn’t an obvious path from there we could find fragments of trail closer to the peak. If we opted to start from there we’d need to drop down (cross-country) then regain elevation to connect to the ridge leading to Howard Peak.

Since we weren’t convinced that was the best approach to Howard we continued on the Tolmie Peak trail to the lookout thinking we’d find a better path. Behind the lookout, we found a rough path though it could never be considered a trail as most hikers know it. The path was steep and sketchy and could best be described as hiking “cross-country.” At times we hiked remnants of a climber’s path, at times on game trails and at times cross-country. Fortunately, the day was clear and we could see the topography as we progressed.

After losing some elevation, we climbed, mostly cross-country to the ridge that leads to Howard Peak and Arthur Peak, a little beyond. Once on the ridge-crest, the going was much easier and the path showed signs of use. This was ridge-running at its best with views all around. Though it was a hot day and the mosquitoes were out they could not deter us from enjoying the views and the fun it is to follow a path to a peak we’d never climbed.

Other than occasional bear scat we didn’t see wildlife or other hikers along the ridge. The ridge-walk was easy and pleasant, at times near the edge of cliffs with harrowing views though you’d have to work at it to lose your footing. Once we were on the ridge-crest the path, was much easier to follow.

Soon we stood on the summit of Howard Peak and not surprisingly had it to ourselves. There was no summit register (the park discourages summit registers) but we found pieces of an ancient metal can and a couple of small rocks that might have been someone’s attempt to build a cairn. The summit provided the ideal place for lunch as there are several stool-sized rocks/perches to sit upon with views all around. The most difficult part of being on the summit was deciding which direction to face as we tore into our well-earned lunches.

On our return trip, rather than retrace the steep climb back to the Tolmie Peak lookout we made an easy cross-country traverse from Howard Peak through forest and meadows back to the pass we’d considered on our way to the lookout. This involves a short, steep climb on the steep meadow below the saddle; again, we found fragments of trail that you can’t see when you are standing on the saddle. Even where there was no tread we found this much easier going than if we’d climbed back to the lookout.

We learned from our “research” that it is easier to approach Howard Peak/Arthur Peak from the pass below Tolmie Peak lookout. This pass is located at 5,779 feet – once you drop down from the pass you’ll find a rudimentary path that heads toward Howard Peak, at times on steep, cross-country terrain.

This scramble is recommended only for strong, experienced hikers with route-finding skills (including a GPS, map and compass). At this point in the year, days are growing shorter so plan an early start. Hike carefully and when temperatures drop watch for hoar frost in the mornings on steep heavily vegetated terrain.

To reach the Wonderland Trail trailhead (where the hike to Tolmie Peak begins): From Puyallup, drive 13 miles (east) on State Route 410 to Buckley then turn right onto Highway 165. Continue through Wilkeson/Carbonado and shortly past the Carbon River Gorge Bridge, turn right onto Mowich Lake Road (signed). Drive to the end of the 16-mile road (gravel) – the road is suitable for passenger cars though can be dusty and like a washboard in places.