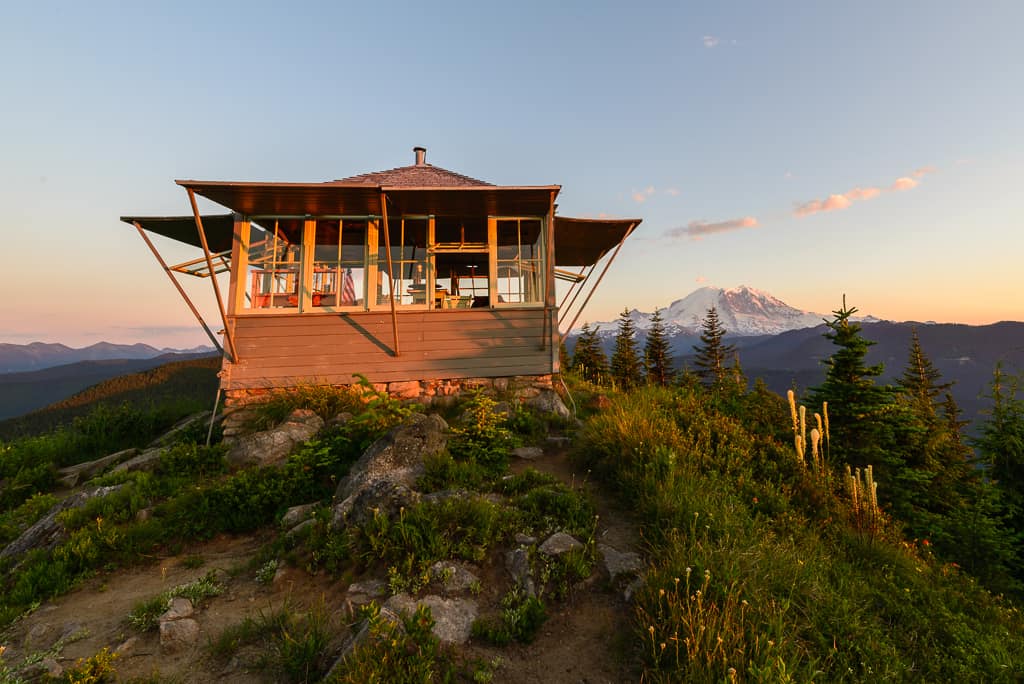 Snow-clad and draped in glacial-ice, it seems unlikely that wildfire would pose a threat to Mount Rainier. However, ringing the base of the 14,410-foot volcano is a nearly unbroken canopy of towering firs, hemlocks, and cedars within the 235,000 acre national park. And surrounding the park are millions of acres of additional timberland managed within national and state forests and private tree farms. When the nascent United States Forest Service decided that it was a good idea to start building fire lookouts to watch over this treasure trove of timber, they looked toward Rainier’s lofty slopes as the perfect spots to site them.

In 1916 the US Forest Service constructed a stone shelter for fire watching at 9,584-feet on Mount Rainier’s Anvil Rock just below Muir Camp. The rock hovel was replaced 12 years later by a cupola cabin. And while this location did indeed provide excellent fire finding with its sweeping horizon spanning views-all too often it was shrouded in clouds prohibiting any viewing at all.

That was the issue too with the park’s second fire lookout situated on a 7,176-foot point on the Colonnade on Rainier’s northwest shoulder. Built in 1930, it was soon taken out of use, replaced by a new tower at lower Sunset Park. But Anvil Rock remained staffed until 1942, not so much as to report fires but to record weather data. Soon after the first tower was constructed on Mount Rainier, both the park service and the forest service realized what many hikers know today-that some of the best and more reliable alpine views are not on the mountain itself, but on the surrounding lower ridges and knobs immune to near-perpetual cloud cover.

By the 1930s, the park service and forest service began surveying more appropriate locations for fire lookout placement. And with the nation now in a Great Depression with millions of unemployed young men enrolled in FDR’s Civilian Conservation Corps (CCC); forest and park officials had an army of labor at their disposal to construct new fire towers.

To the south, a precariously built lookout was constructed above sheer ledges on 5,685-foot High Rock. And a lookout was built on a 6,310-foot rounded knoll in the Tatoosh Range; where long before beat poet Jack Kerouac immortalized the Deception Peak lookout in the North Cascades, author Mary Hardy penned a well-received book, Tatoosh in 1947 about her experiences as a fire watch during World War II.

Along Mount Rainier National Park’s western boundary, a lookout tower was built in 1934 on 5,450-foot Glacier View peak. Thirty years later, the Washington Department of Natural Resources constructed a tower on 4,930-foot Puyallup Ridge. It still stands and is listed on the National Historic Lookout Register. However, it is rarely visited due to access issues over private land.

But the lookouts that

still remain within the national park and adjacent national forest lands are accessible (mostly by trail) to the general public. Within Mount Rainier National Park, four fire towers remain; one in each corner of the park. And while these four survivors share the same construction; two-story wood-framed with wrap-around windows and balcony-they each provide a unique view and perspective of the sprawling forests surrounding Mount Rainier, and of the mountain itself.

Tolmie Peak Lookout
Sitting watch over the northwest corner of the park, Tolmie’s 5939-foot summit commands impressive views from “the Mountain” to “the Sound.” The trailhead is reached via the Mowich Lake Road where you follow the Wonderland Trail north for 1.5 miles to Ipsut Pass. Then bear left for 1.7 miles through open forest and sub-alpine meadows skirting sparkling Eunice Lake before making the final ascent to the peak.

Mount Fremont Lookout
Perched on a ridge over 7,000 feet, the Mount Fremont lookout has the distinction of being Rainier’s highest remaining lookout. Situated in the drier northeast side of the park, the meadows here are punctuated with pumice and rock. The view of Rainier’s impressive Willis Wall and Emmons Glacier is breathtaking. Thanks to a lofty trailhead elevation of 6,400′ at Sunrise, you need not work hard hiking the 2.7 miles to this lookout.

Shriner Peak
The loneliest of Rainier’s lookouts, Shriner guards the quiet southeast corner of the park. The 4.2-mile hike to this 5,834-foot peak begins off of SR 123. With over 3,400-feet of elevation gain, the trail is often deserted. Consequently, chances are good here for viewing wildlife. Much of the peak’s lower slopes were engulfed by a wildfire (before the lookout was constructed) creating open meadows and prime habitat. Bear, elk, deer, and grouse are abundant on Shriner.

Gobbler’s Knob
At 5,485-feet, Gobbler’s Knob is the lowest of Rainier’s lookouts. It used to be the shortest to reach too-just a 2.5-mile hike from Round Pass off of the West Side Road. But Tahoma Creek has continuously flooded this road forcing its closure. To reach the trailhead now, you must first bike or walk an additional 4 miles each way.

The trail cuts through incredibly lush and thick forest en route to the lookout. Placid Lake George offers respite from the continuous green canopy. Gobbler’s Knob has the distinction of being the closest lookout to the colossal volcano. From the viewing platform it feels as if “The Mountain” is breathing right down your neck.

Suntop
Perched on a 5,271-foot open knoll just to the north of Mount Rainier National Park, is the restored 1934-built Suntop fire tower. Reached by FR 7315 (off of FR 73 near The Dalles Campground on SR 410) Suntop is a popular family picnicking and sightseeing spot. Hikers and mountain bikes can access it by following a 7.5 mile trail from Buck Creek off of SR 410. And snowshoers and cross-country skiers follow the closed road in winter to the lookout.

High Rock
Perhaps the most dramatic of the remaining lookouts in the area, this 1930-built structure sits on a 5,685-foot precipitous peak along the appropriately named Sawtooth Ridge. And it’s only a 1.4 mile hike to this exhilarating destination teetering above sheer cliffs over 600 feet high. The trailhead is reached by following FR 8440 from Skate Creek Road (FR 52).

Kelly Butte
A fire tower has graced this isolated and rocky 5,409-foot knob since 1926. The current structure, built in 1950 was recently restored by volunteers. The trail too has been rebuilt in places making what was once a short and steep trail, a little less steep. Besides great views of Mount Rainier, here as with Mount Fremont, chances are good of seeing mountain goats. Reach the 1.7 mile trail via FR 7030 (rough in places) off of the Greenwater River Road (FR 70).

These remaining lookouts, like many of the surviving fire lookouts from coast to coast are primarily no longer used for fighting forest fires. Succumbing to aircraft surveillance, these backcountry sentinels remain in place as historic landmarks, much admired by visitors. But beyond their weathered clapboards, they also provide unsurpassed views of Washington’s beloved lofty landmark, Mount Rainier. No longer needed to suppress wildfires, these lookouts now ignite passion and awe in their admirers by offering some of the hottest views in the Northwest.

How do I reserve a Lookout Tower?

The Mount Rainier area lookout towers do not accept reservations, there are no overnight visits or camping allowed at the lookout towers. As an alternative experience consider exploring the Mount Tahoma Trails hut to hut system.

Crystal Mountain Resort and Stanley are excited to offer an evening snowshoe adventure. Climb through the snow-covered forest, indulge in tasty food &

Crystal Mountain Resort and Stanley are excited to offer an evening snowshoe adventure.

Climb through the snow-covered forest, indulge in tasty food & drink while enjoying the mountain environment with other like-minded individuals. Discover the wonder of winter adventure in the Cascade Mountains through snowshoeing with experienced guides.

In the afternoon, participants will meet up in the base area and start making their way uphill. The route will begin at the Crystal Mountain base area (4,400 ft) and wind up through the towering forest along the Silver Creek Trail. Once you’ve got your fill of views and uphill travel, the group will warm up with drinks and make their way down to a delicious dinner and music back at the base area.

This unique snowshoeing experience is only offered a few times a season so take full advantage of a great workout and connect with other fun mountain merrymakers.

Q: How much does this event cost?

A: Tickets are $70 per person plus tax and ticketing fee this includes a swag bag, guide, dinner, and drink tickets. If you need to rent the equipment you can rent snowshoes and poles for an additional $30

Q: Who should attend? Do you have to be an experienced snowshoer?

A: Snowshoers of any level are welcome. Previous experience is not required but participants need to have a clear understanding of the physical requirements of traveling uphill.

Q: Will I enjoy snowshoeing?

A: Snowshoeing is one of the most peaceful ways to explore the snowy alpine. The footprint of the snowshoes keeps you elevated above the deep snow and makes it nearly as easy as walking. Snowshoes also have metal teeth that grip on steep or icy surfaces, making it easy to climb steep slopes if you desire. Crystal Mountain has set up a trail system that should make your adventure very easy and fun.

Useful tip: Think about bringing a dedicated camera instead of using your phone, as the cold can wear out phone batteries pretty quickly. You may need to use your phone in case of an emergency so a dedicated camera is a better idea. At the very least make sure someone in your party has a fully charged phone and keeps it warm.

Consider bringing/wearing the following items on your snowshoe trip to ensure a fun, warm, dry time.

Q: Where can I stay after the event?

A: Crystal Mountain Hotels offers three properties within walking distance of the event. You’ll find vacation rentals and cabins in the area. Click here for lodging at or near Crystal Mountain Resort.

February 19th is sold out.