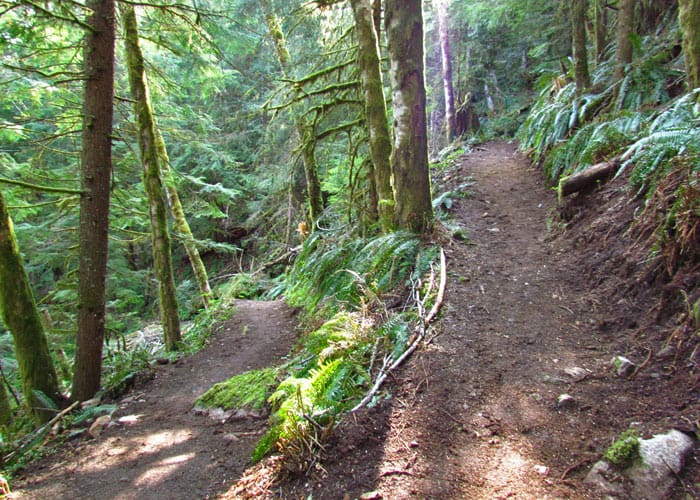 Good news for hikers and snowshoers – the Boundary Trail at the Carbon River entrance of Mount Rainier National Park is again open. We’d been hiking and snowshoeing the Boundary Trail since the early 1990s – the trail is no secret to year-round mountain aficionados. Snowshoers with route finding skills can also climb Florence Peak at 5,808 feet (one of The Mountaineers Irish Cabin peaks) from Alki Crest at about 4,400 feet.

The trail was built by the Civilian Conservation Corps in the 1930s for the purpose of patrolling the park boundary. Some stretches of the Boundary trail have been lost to Time; though another stretch of the Boundary Trail can be hiked from the Nisqually entrance of the park and is also featured on this site.

Mount Rainier National Park Associates (a volunteer organization that includes trail maintenance) and other volunteers, including Washington Trails Association (WTA) have worked on the trail and the work will continue. Their efforts show – today the trail, which is accessed from the 0.3-mile Rain Forest Nature Trail just inside the Carbon River entrance, is signed, user-friendly and as easy to follow as any trail inside the park. The Rain Forest loop showcases temperate rain forest and provides a nice warm-up before the climbing begins.

Once you leave the Rain Forest trail the Boundary trail takes off at a feverish pitch as it aims toward Alki Crest. Although the grade is steep the trail is scenic enough you might not notice the near-vertical grade, at least not initially. It’s not just the steepness that will take your breath away, the old-growth trees will compel you to stop and take a second look at ancient Douglas firs and Western red cedars so tall they block the sun, a plus on a warm summer day. Some of these giants are approaching record-growth statistics; look for metal National Park Service (NPS) Boundary Trail signs on a huge Douglas fir at the end of a switchback. In about a half-mile there is an opening where there are views of the Carbon River.

Even before volunteers made the trail more hiker-friendly the trail was easy to follow to Alki Crest in summer. The siren call of destinations beyond Alki Crest may whet your appetite for further adventure, including Florence Peak. In winter hike (or snowshoe) as far as ambition, skills and conditions allow. On a long summer day it may be possible for strong hikers with route-finding skills to continue from Alki Crest to a saddle just below Tolmie Peak lookout, an extremely challenging undertaking. A car-key exchange would be necessary to do so with a second car at Mowich Lake. Sections of the route are sketchy; success is not guaranteed. The Boundary Trail descends from Alki Crest to the Mowich Lake road; a few years ago we found that section of the trail difficult to follow and did not find our way to the road.

As we climbed the forest slowly began a quiet conversion to a winter-wonderland with creamy hummocks of snow providing contrast to tall conifers and cut-logs fanged with icicles big as walrus tusks that reached to the ground. The yellowish hue on the icicles comes from tannin in the wood. The silence was broken only by the “whoosh” of wet snow falling from the trees.

In winter, conditions can change on an almost hourly basis as freezing and snow levels rise and fall so it’s wise to be prepared for either a hike or snowshoe trip in late winter/early spring. Always get an update on the weather before setting out. If it’s a low snow year hikers can sometimes get to Alki Crest without needing snowshoes and with little concern for avalanche. However, if Florence Peak is your objective you may need to settle for the false summit, a little lower than the true summit. The summit-ridge can be icy and treacherous in winter.

Since the weather was marginal we turned around where the trail crosses Irish Creek at the “waterfalls” at 1.3 miles, elevation about 3,200 feet. We made good time back to the Rain Forest trail, the trailhead, dry clothes and a thermos of hot tea in the car. The rain eased off enough that we were able to take photographs of the moody, mist-shrouded Carbon River before leaving the park. We also stopped at the road-bridge that crosses the Carbon River where a forest service road (Cayada Creek Road) continues to other potential adventures inside the Clearwater Wilderness.

If you have time, note a clearing on the south side (left) of the road shortly after you leave the park; though there is nothing there today to mark the spot, this is where Irish Cabin once stood. Irish Cabin was built before the turn of the 19th century by a man known as Mr. Irish who worked a nearby mine. There was no road then into the Carbon River region and the cabin was approached from a trail up the north side of the Carbon River. In the 1920s a rough road was built to access another cabin in the region and in 1926 a group of Tacoma Mountaineers who’d heard of the cabin checked it out to see if it could be restored and used as a retreat for the Tacoma Branch of The Mountaineers. They found the cabin to be in good enough condition to restore and purchased the cabin and its surrounding acreage during the depression. In the 1940s they built a new foundation, constructed a river-stone fireplace and remodeled the kitchen for group gatherings and weekend outings.

Before the road to Mowich Lake made the 24 “Irish Cabin” peaks more accessible, Irish Cabin was the perfect place to stay for recreational and mountaineering pursuits on the north and west side of Mount Rainier. After the 1950’s road improvements in the park made it easier to access trailheads from Tacoma and the Irish Cabin Peaks climbs became popular day trips as they are today.

Though the Tacoma Branch maintained the cabin for many years, the undertaking of keeping the cabin habitable, free of squatters and vandals became too expensive and the cabin was dismantled in 1978.

There are 24 “Irish Cabin” peaks, including Florence Peak; other branches of The Mountaineers also have “peak” pins that are awarded on an annual basis to climbers who attain the appropriate summits.