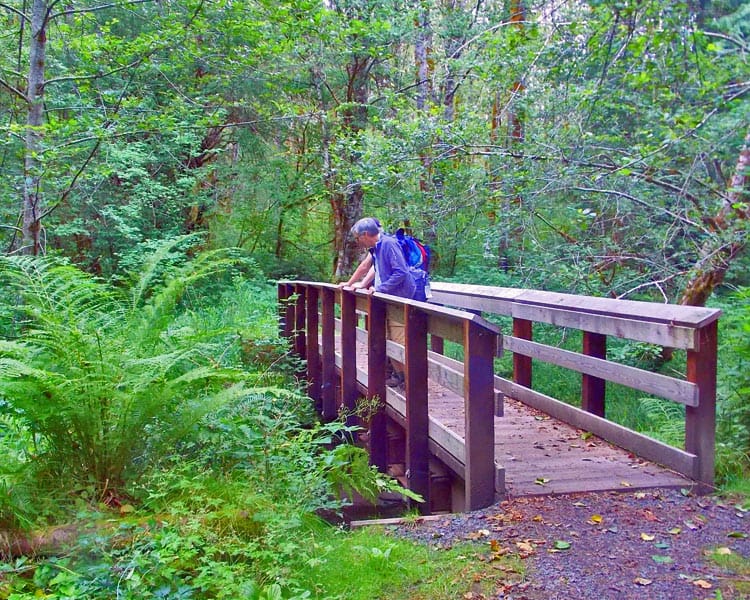 This is a quiet trail. You may feel compelled to whisper too, once you are on the Woods Creek Watchable Wildlife Trail in the South Cascades. Though we didn’t see any wildlife to disturb the Indian Pipe that festooned, the forested trail was a fine consolation prize.

There are two loops; one is the Pond Loop (Trail 247), the other trail (247A) is a loop through the forest. It is easy to combine the two loops as junctions are well-signed and the elevation gain is negligible. There is also a pleasant picnic area with a picnic shelter near the trailhead. In July, daisies and tall grass make for a pleasant picnic setting though we did not need a shelter on this summery day.

We hiked counter-clockwise starting out on the Forest Loop trail. While there are few interpretive signs, several handsome, artistic displays of animal paw-prints grace the trail so when you come across tracks you’ll know what animal made those prints – marten, beaver, elk, deer, coyote or bear. It’s a superb hike for families and those interested in a simple, quiet forest tour.

The loop through the forest is pretty with Oregon grape, salal, ferns, vanilla leaf, evergreens and plenty of vine maple. With all the vine maple this would also make a beautiful fall-color hike.

When we first spotted Indian Pipe we were ecstatic – the plant is extremely fussy as to where it grows, preferring forested habitat near evergreens or under/near logs. It is also called ghost pipe or phantom lily – the plant is a parasite getting its nutrients from other plants. We spotted several splendid displays of this ghostly plant, never have we seen so much Indian Pipe in one setting.

Indian Pipe (Monotropa uniflora) is a waxy white plant that blackens as it turns old. With several clustered stems the “flowers” are about 3/4 inches long with a flower hanging at the end of each stem shaped like a bell or shepherds crook. They prefer deeply shaded forest and flower June-August. Indian Pipe has a symbiotic relationship with a fungus that absorbs nutrients from the roots of chlorophyll producing plants (hence, it is considered a parasitic plant). Our only gripe against encountering this flower is that we spent way too much time taking photographs!

Back at the loop trail junction we then hiked the Pond Loop Trail though this time of year the pond appeared to be in the process of becoming a large meadow. We suspected the meadow was boggy so remained on the gravel path stopping at a designated overlook of the “pond” where there is also a memorial plaque for a dedicated volunteer.

To get there: From Randle on US 12 drive south on State Route 131 (Forest Service Road No. 25) approximately 8 miles to the signed trailhead (left).