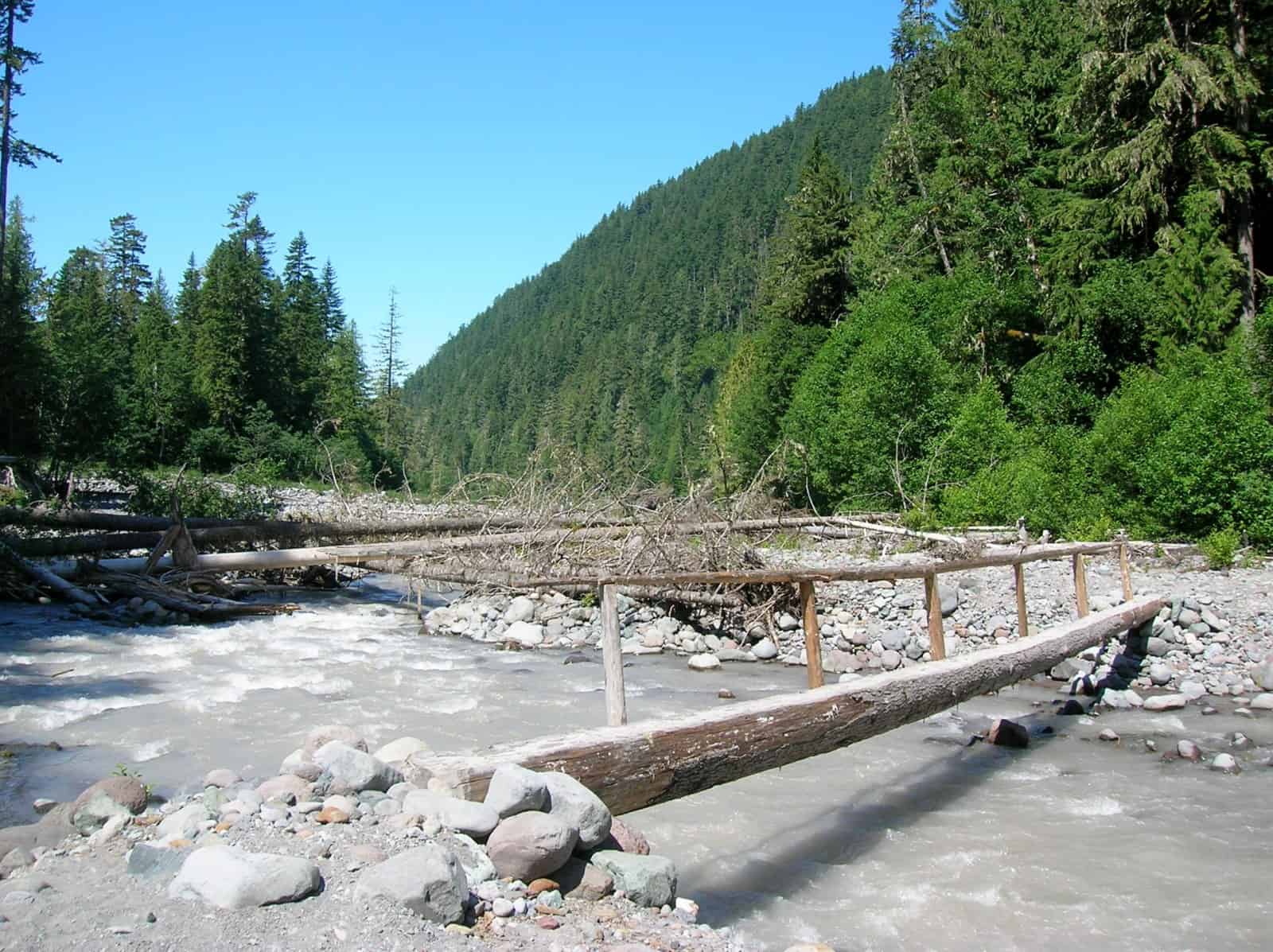 The Wonderland Trail travels for 93 miles around Mount Rainier. Constructed in 1915, it is one of the most beautiful, challenging, and popular hiking trails in America. The trail can be hiked in its entirety as a through hike usually typically taking 8-14 days to complete; or in shorter sections. Most people begin from Longmire and hike clockwise. This series of Wonderland Trail articles is meant as an introduction of what you can expect on this amazing trail. Be sure to consult with park officials for complete rules, permitting information and trail conditions before setting out. Consider too, these two excellent resources for more details: Green Trail Maps Mount Rainier Wonderland Trail Map 269S and Hiking the Wonderland Trail by Tami Asars (Mountaineers Books).

Overnight permits required and can be acquired by making reservation in advance or at the Longmire Wilderness Information Center (360) 569-4453; www.nps.gov/mora. Find complete permit information and park and trail rules and regulations.

Notes and special concerns: In early season, mosquitoes can be dreadful at Golden Lakes. Bridges over the South and North Mowich River prone to washouts; check ranger station for current conditions. This is one of the most remote sections of the Wonderland Trail. Trail can be accessed at Mowich Lake or from Longmire (see Wonderland Trail part one). Alternatively the southern section can be reached by hiking or mountain biking the Westside Road to the North Puyallup Trail.

Trailhead directions: (South) From Elbe at the junction of SR 7 and SR 706, head east on SR 706 passing through Ashford and reaching Mount Rainier National Park at 14 miles. Continue west on park road for 6.5 miles to Longmire and trailhead parking near the Wilderness Information Center. (North) From Buckley follow SR 165 south for 10.3 miles bearing right on road to Mowich Lake. Continue another 16.8 miles (pavement ends at 1.6 miles) to road end at Mowich Lake.

From the North Puyallup River Camp (elev. 3750 feet) continue north on the Wonderland Trail and start climbing. The trail begins a long traverse across a ridge high above the North Puyallup River. The grade is gradual as you wrap around a couple of ridge crests and dart in and out of a few small creek valleys. Tree cover thins considerably as you enter an area still showing signs of a large wildfire that swept through in 1930. The conflagration was accidentally caused by a contractor commissioned to extend the West Side Road. Plans to complete the road were eventually extinguished along with the fire, and the forest is slowly recovering. Silver snags punctuate clusters of greenery while bear grass and a myriad of flowers decorate the forest floor.

At 3.0 miles from the North Puyallup River Camp (22.5 miles from Longmire) come to an unmarked junction (el. 5,200 feet). The unmaintained but still hikeable trail leading right makes for a great side trip. Follow this trail for about one mile and 300 vertical feet to the old fire lookout site at Sunset Park (el. 5,530 feet). In 1930, the second fire lookout built in Mount Rainier National Park was constructed on a 7,176-foot point on the nearby Colonnade. Shrouded in clouds most of the time, it was quickly abandoned and a new lookout was constructed much lower at Sunset Park. The Sunset Park lookout was abandoned in the 1960s and sadly destroyed in the early 1970s. All that remains are the sweeping and expansive views.

The Wonderland Trail continues north slowly descending through Sunset Park, an area of meadows, small lakes, silver snags and clumps of evergreens. In early summer the flowers are sublime. In late summer the blueberries are bountiful. At 5.0 miles from the North Puyallup River Camp (22.5 miles from Longmire) reach the Golden Lakes Patrol Cabin and backcountry campsites (el. 4,900 feet). The patrol cabin which was built in 1922 is still used by backcountry rangers. The cozy campsites are spread around one of the smaller Golden Lakes. The larger Golden Lakes are located several hundred feet down the ridge and are not accessed by trail. During the evening the lakes often harbor a golden glow. And being in Sunset Park makes this area ideal for watching the sun retreat into the horizon. Here on the western edge of the national park boundary, on clear nights you can see the lights of greater Pugetopolis twinkling below.

The Wonderland Trail continues through the old burn zone climbing slightly before gently descending along a broad ridge. There are some decent views out to the industrial tree farms west and down below to some of the dozen plus bodies of water making up the Golden Lakes. But there are only limited views of Mount Rainier as it is partially hidden behind the long ridge known as the Colonnade. At 2.2 miles from the Golden Lakes Camps (23.4 miles from Longmire) reach a small gap (el. 4,700 feet). Here a side trail leads left to a jeep track outside of the park. There are some good views of Mount Rainier from an open knoll along the way.

The Wonderland Trail continues right steeply descending off of the ridge switchbacking through dense stands of fir, hemlock and cedars. If doing this section in reverse, it’s one of the most arduous climbs on the trail. Eventually reach the valley floor where you’ll make several crossings of the multi-channeled South Mowich River. The Park Service puts log bridges out in summer and fall, but during times of heavy rainfall and snow melt, water may splash over the log bridges. The bridges have washed away on several occasions too, so be sure to monitor their status with the park service before heading out. Take the opportunity to look upriver at the churning gray waters roiling down from glaciers wedged between steep stark ridges of the mountain.

Just beyond at 5.3 miles from the Golden Lakes Camps (29.8 miles from Longmire) reach the South Mowich River Backcountry Camp Area (el. 2,600 feet). Located in open forest on a bank above the roaring South Mowich River, this camp is quite an audible contrast to the quiet Golden Lakes. If you need white noise (or in this case whitewater noise) to sleep well—you’ll have a great rest here. The Wonderland Trail continues along rocky river bottomlands soon coming to the roaring, rushing glacial-silted North Mowich River. A sturdy solid log bridge should be in place to allow for a safe crossing.

Once across, start climbing again. At 6.3 miles from the Golden Lakes Camps (30.8 miles from Longmire) come to a junction (el. 2,700 feet) with the Paul Peak Trail. This pleasant trail heads left 3.1 miles climbing through beautiful old growth forest to the Mowich lake Road. You want to continue right on the Wonderland Trail traversing and climbing steep wooded slopes beneath Paul Peak and Elizabeth Ridge.

The way slowly and arduously at times climbs out of the Mowich River Valley. Soon after crossing Crater Creek you’re granted a reprieve from climbing. At 3.9 miles from the South Mowich River Camp (33.7 miles from Longmire), come to a junction with the Spray Park Trail. The Spray Park Trail, one of the most beautiful trails in the park heads right here. It is often used as an alternative route for Wonderland Trail hikers to the Carbon River where it once again meets up with the Wonderland Trail. While it is highly scenic, this trail crosses permanent snowfields that can be dangerous in early season and throughout the season during years of heavy snowfall. Consider it if trail conditions and the weather are favorable. Otherwise stick to the official Wonderland Trail route which heads left here.

Within 0.3 mile (34.0 miles from Longmire) arrive at beautiful Mowich Lake (el. 4950 feet) and its unappealing campground. The lake is the largest and deepest in the park and shares its name with the Mowich River and Mowich Glaciers. Mowich means deer in the Chinook jargon and early Native Americans spotted within the glaciers and rock on Mount Rainier’s northwest side the figure of a deer. See if you can spot it—although it is most discernible from Spray Park.

The Mowich Lake Campground consists of open sites on a gravel loop at the end of the Mowich Lake Road. The area is busy during the summer months with throngs of day hikers passing through and car campers occupying sites. You’ll do better sticking to backcountry camps and trying not to stay here unless you are beginning or ending your Wonderland Trail hike here and need an early start or a rest before returning home.