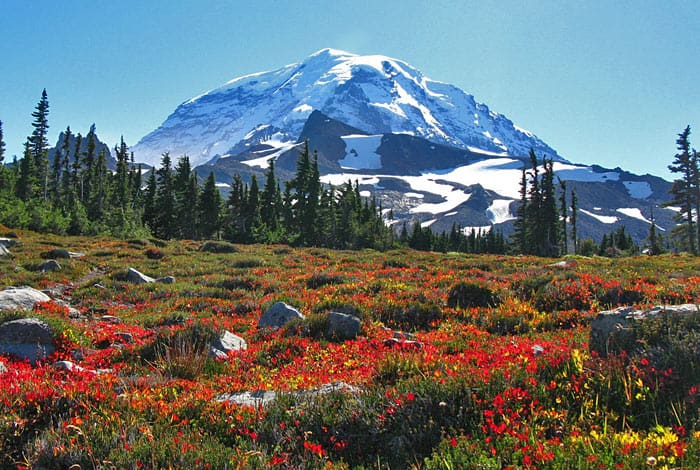 Editor’s Note: Outdoors Writer Russ Mohney died Aug. 31, 2009. The loss is staggering. His writing and insight into the outdoors of Southwest Washington was unmatched. The Chronicle continues to publish his popular column each week from his abundant body of work created throughout the past decade for The Chronicle based in Centralia, WA. This column was originally published Oct. 27, 2006.

The first hesitant snifters of snow fell on the mountains of the east county this week. There was snowfall down to the pass level at Stevens, Chinook and White passes, much to the delight of passers-by and returning vacationers.

There wasn’t much vigor to the late October snowfall; there seldom is. Still, it served notice that a transition to winter is beginning. To those of us who thoroughly enjoy the high and wild places, it is also time to go up to the hills and be witness to all that takes place. For me, there are two compelling reasons to spend a long day driving around the grand loop from Packwood over Chinook Pass, down the American and Naches rivers to U.S. 12, and then up the Tieton and over White Pass to get back to Packwood.

It’s a long day because the outing, properly conducted, requires dozens of stops at places like the Ohanapecosh, Morse Creek, American Forks, the Little Naches, Oak Creek , south Rimrock and Pinegrass Ridge before one even reaches White Pass. Each of those requires a quiet hike away from the trappings of a highway culture.

The first reason I wouldn’t miss this late fall adventure is the frenzied activity of the birds, small animals and big wildlife. Each has a specific, pointed purpose in life that the winter signals into action.

There is a sense of urgency about the Clark’s nutcrackers as they shuck ripened cones for the winged pine seeds that will carry them through another alpine winter. Spotted towhees are singing one last hurrah to low-bush cranberries and a few wizened huckleberries before they venture downhill for the winter.

Voles and mice are scurrying about forest openings and old burns to collect the grasses and seeds that will provide warmth and sustenance through the cold, dark burrow days. Hawks and owls have noticed the frenetic pace of the rodents and are putting away an opportune layer of fat for the days ahead.

Deer and elk have felt the first chill breezes and will soon begin slowly drifting down from their summer ranges to congregate and breed.

It is a magic time in the wildlife communities of the Cowlitz and Naches and Tieton.

The second – and no less vital – attraction of the great loop is the sheer exuberance of color that is spread about the landscape. There is an almost unbearable enchantment in the fire of vine maple at the margins of alpine fir or the electric evenglow of a quaking aspen along the little Naches.

Giant cottonwoods are laying down a carpet of gold, through which reddening deer brush and huckleberry are shouting for attention. There is a pleasant madness to the assault of color on our wondering senses.

While it is quite possible to witness this charmed busyness and brilliance from the seat of a pickup, the stops and short hikes I prescribe are, I believe, essential to complete the adventure. When you have seen such unthinkable grandeur from your own, private perspective, it matters so much more to the lasting pages of memory.

The annual excursion has been a part of my late-autumn ritual for as long as I can remember, and I am wholly certain my life would not be as full without such essential visits. As Aldo Leopold wrote, “I am glad I shall never be young without wild places to be young in. Of what avail are forty freedoms if there is not a blank spot on the map?”

I recommend a day trip – on the very next sunny day – over Chinook and White passes on the grand loop. Then you’ll have a hunch what ol’ Aldo meant!

Russ Mohney described himself as a “peasant naturalist.” He was a fourth-generation Lewis County outdoorsman. His book “A Simple Song: Recollections from a Backwoods County” is a collection of his favorite columns reworked to include a bit more detail from the original. The popular book can be ordered by calling The Chronicle at (360) 736-3311.