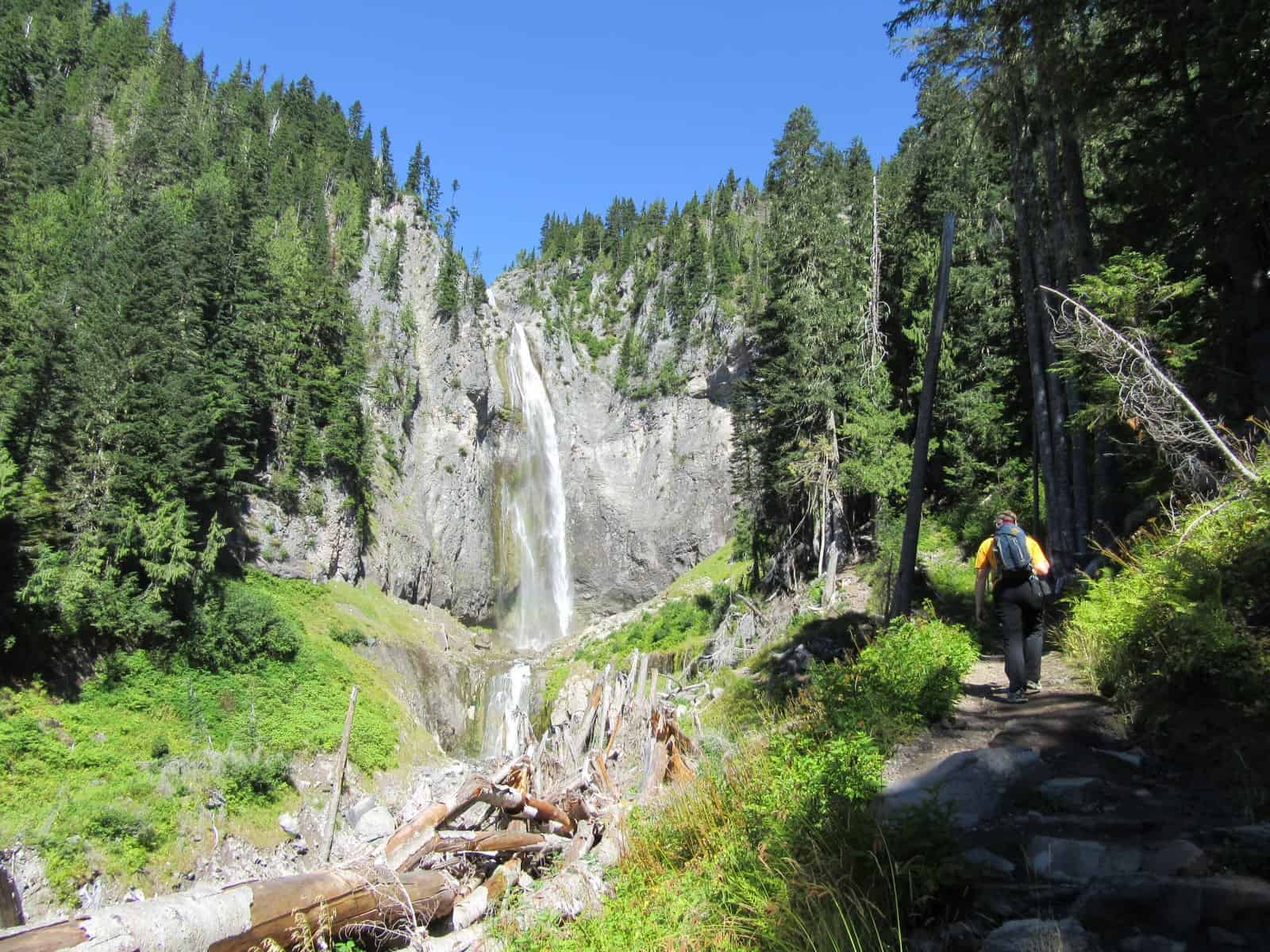 Hike up a narrow rugged valley scoured by avalanches and roaring with the sound of raging water. It’s a stiff little climb past three thundering cataracts before reaching one of the most spectacular and tallest waterfalls within the park. Here at the base of Comet Falls, stand mouth agape and eyes misted over while you stare at a tributary of Van Trump Creek plunging more than 300 feet down a sheer stark basalt wall.

Ranked by many area hikers as being the most beautiful and awe-inspiring waterfall within Mount Rainier National Park, Comet Falls sees a fair amount of visitors. While the trail can be busy—it rarely gets crowded. The real challenge however is securing a parking space at the trailhead. The parking lot is less than adequate to accommodate all of the folks wanting to hike to this natural wonder. Try to get to the trailhead early in the morning and weekdays are best. If the parking area is full—do not park on the side of the road as you risk endangering drivers and landing yourself a citation. Instead, head to another hike close by and return later in the afternoon.

The trail immediately starts with an attitude.

After a short and steep introduction, come to a bridge spanning high above a deep chasm. Here Van Trump Creek crashes below before plummeting over Christine Falls near the Longmire-Paradise Road. You can’t see Christine Falls, but you can see several plunge pools and small cascades in the ledgy gap below.

Once across the chasm the trail continues up the narrow valley cradling the roaring creek. The way is steep at times, but eases as you progress toward Comet Falls. While you initially began in cool, old-growth forest, you’ll encounter several sections denude of ancient trees. The trail crosses three avalanche chutes that have been scoured of big trees and kept open by regular snow slides. This trail can be extremely dangerous to hike early in the season. And even in early summer after avalanche threats have subsided; damage and debris left from the previous winter’s snowpack can make travel challenging. Be sure to check with the ranger station on the current condition of the trail.

As you march higher up the tight valley, you will get a sneak peek of the top of Rainier at one point—but generally the steep surrounding slopes prohibit any sweeping views from along the way. Obscured too is the first of three waterfalls along Van Trump Creek before you reach Comet Falls. You’ll catch a glimpse below of the second one. Look for a tiered waterfall commonly referred to as Middle Van Trump Falls. Don’t be discouraged however over the less than stellar viewing, as just up ahead is a real treat. Here the trail crosses Van Trump Creek on a log bridge at the base of a spectacular cataract known officially as Bloucher Falls, but more commonly referred to as Van Trump Falls. Past floods scoured out the tight canyon housing this waterfall providing unhindered viewing of this breathtaking triple tiered waterfall.

It’s a beautiful sight and one that may lead you to feeling quite content.

But hike just a little farther for the grand finale. After crossing the creek, reenter a strip of forest and crest a small divide. Then behold in the near distance one heck of a waterfall. Keep hiking, soon breaking out of forest and entering a steep mist blasted emerald slope within the spray zone of Comet Falls. At a switchback walk left on a short spur taking you nearly to the base of the 320-foot waterfall. Don your rain jacket and keep your camera dry as you stare straight up the silvery fan of water plummeting over a steep basalt wall.

The scene looks like it can be straight out of Yosemite National Park.

And just like what you’d expect in Yosemite, above this waterfall is a hanging valley, where the creek is flowing on a much gentler course—and where flower gardens and forested glades line the waterway. It’s a remarkably different world than the misty stark walls at the waterfall’s base. Most folks are content to turn around at this point—but if you want to keep on hiking, follow the trail steeply out of the valley to the upper valley at about 5,300 feet. Enjoy some flowered meadows (in summer) and a good view down the Nisqually River Valley to Mount St. Helens. At 2.3 miles you’ll reach a junction. Here you can hike right to Van Trump Park (oft snow covered by late October) or left to Mildred Point and the Rampart Ridge. If you can arrange for a shuttle—you can follow the trail along Rampart Ridge to the Wonderland Trail and then head back to Longmire. It’s a 5 mile often lonely journey from the junction.

Trailhead directions: From Elbe, follow SR 706 east (passing through Ashford) for 14 miles to the Nisqually Entrance of Mount Rainier National Park. Then continue east on the park’s Paradise-Longmire Road for 10.2 mile to the trailhead on your left.