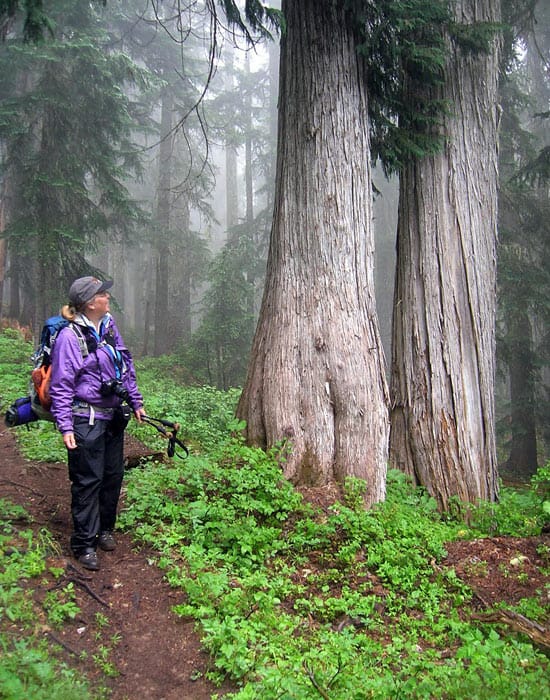 If your idea of backpacking within Mount Rainier National Park means traversing flower-studded meadows and windswept alpine tundra; and clambering over ridges to eye-popping viewpoints-than this hike isn’t for you! But if you crave solitude, have a deep admiration for primeval forests, and seek solace in a landscape that has changed little since the park’s inception-than you’ll absolutely love this trip.

To reach the Three Lakes, a trio of shallow, grass and ancient forest ringed bodies of water tucked within the isolated and lonely southeast corner of the park; head out on the Laughingwater Trail. One of the few trails in the park open to stock, you’ll more than likely encounter no equestrians or fellow hikers while heading up this lightly traveled but well built path.

Starting in the deep Ohanapecosh River valley the trail rapidly climbs to crest a small knoll before dropping 100 feet or so to bring you closer to Laughingwater Creek. Before that the creek was primarily out-of-sight, tumbling, crashing, and gurgling down a narrow ravine. But now you can become acquainted with the whimsically named creek, for it will be accompanying you for the next several miles. A delight to look at, the creek also is pleasing to the ears as its constant cascading fills the air with gregarious and at-times a tad bit furious sounds.

At about two miles you’ll pass by a big marshy swamp that comes spring produces its own music-mainly humming and buzzing mosquitoes! The biting insects will definitely give you an incentive to keep going, helping you tackle the next section of trail which wastes no time gaining elevation. After a short and steep climb, the way settles into a narrow hanging valley hemmed in by steep heavily forested slopes.

Now back to hiking alongside Laughingwater Creek enjoy the sights (including a small cascade) and sounds of this mountain waterway. A short way after crossing a side creek, the trail bids Laughingwater Creek adieu and commences to once again steadily climb. As you slowly leave the chattering creek behind, the forest surrounding you grows increasingly quiet-and increasingly impressive too.

Here at about an elevation of 4,000-feet, the trail cuts across a slope shrouded in giant ancient yellow cedars-some of the biggest and oldest specimens of this unique species in the park. With thick trunks of shaggy gray bark and droopy branches of flat scaly yellowish-green leaves, this conifer suffers a bit of an identity crisis. Its cones resemble those of a cypress, while its foliage resembles a cedar. Not a cedar at all and more closely related to cypress trees, botanists are considering classifying this tree in its own genus. There is confusion too to its colloquial name, commonly referred to in Washington as yellow cedar, and Alaska cedar-in other parts of the Northwest the tree is also known as Alaska cypress, Nootka cedar, and Nootka cypress. But no matter what you decide to call these trees, the ones lining the Laughingwater Trail are imposing and awe-inspiring.

The yellow cedars favor environments with copious amounts of precipitation. And here just a few miles west of the Pacific Crest, rain and snowfall is abundant. The ground is saturated providing favorable growing conditions to produce a jungle like understory of salmonberry and devils club. But as you climb higher into the silver and noble fir zone the understory thins out. After nearly 6.5 miles of upward hiking, you’ll reach a 4,850-ft gap which separates the watersheds of Laughingwater Creek and Panther Creek which is fed by the Three Lakes.

Now slowly descend passing shallow pools of water providing incubating grounds for pesky mosquitoes and various species of amphibians which thrive on the larvae of those blood-sucking insects. Here too at the gap a trail once extended northwest along a rolling ridge to tiny Sheep Lake. In this saturated environment of ferns and mosses, the tread of this long abandoned trail has all but vanished. Still, intrepid hikers on occasion set out to find and follow this bygone backcountry byway.

The abandoned Boundary Trail, however, which once ran along the park boundary with the Gifford Pinchot National Forest and intersected the Laughingwater Trail near this gap and above the Three Lakes can still be followed in places. But if you’re intent on exploring this old trail be sure to come equipped with an old map showing its placement and plenty of experience with off-trail traveling and route finding.

From the gap, the Three Lakes lie just ahead-about a half mile farther and 100 feet lower. Straddling the park boundary, the largest of the three greets you first. Perched on a small rise above it sits a historic patrol cabin. Constructed in 1934 and recently restored, this simple but graceful structure is still used as a backcountry ranger post during the summer months.

With your permit already secured, head to the Three Lakes Backcountry campground with its two individual sites, one group site, and enclosed privy. A peaceful spot, let thrushes, wrens and tree frogs lull you to sleep. Three Lakes is best visited in early summer when patches of snow still grace the shoreline or in autumn when lakeside grasses turn golden and ripe huckleberries tempt grazing. It is during these times that you’ll be able to mosey around the lakes admiring big trees and flitting birds and perhaps an elk or two without be hassled by swarms of mosquitoes. They can be fierce here during the height of summer.

From your base camp at the lakes consider venturing farther up the trail. Straddling the park boundary with the William O Douglas Wilderness, follow the trail for 2.1 more miles and 1,000 more feet of elevation gain to the Pacific Crest Trail. Here beyond the lakes, parkland meadows provide glimpses of Rainier and other peaks north and south. From the junction with the Pacific Crest trail you can wander a quarter mile north to the Two Lakes Trail. Then follow this path for just over one mile to Two Lakes where you can set up camp (no permit necessary) in a wild basin beneath a craggy ridge. And in case you’re wondering where One Lake is-it’s tucked below in even a wilder basin, visited primarily by deer, bears and the occasional cougar.