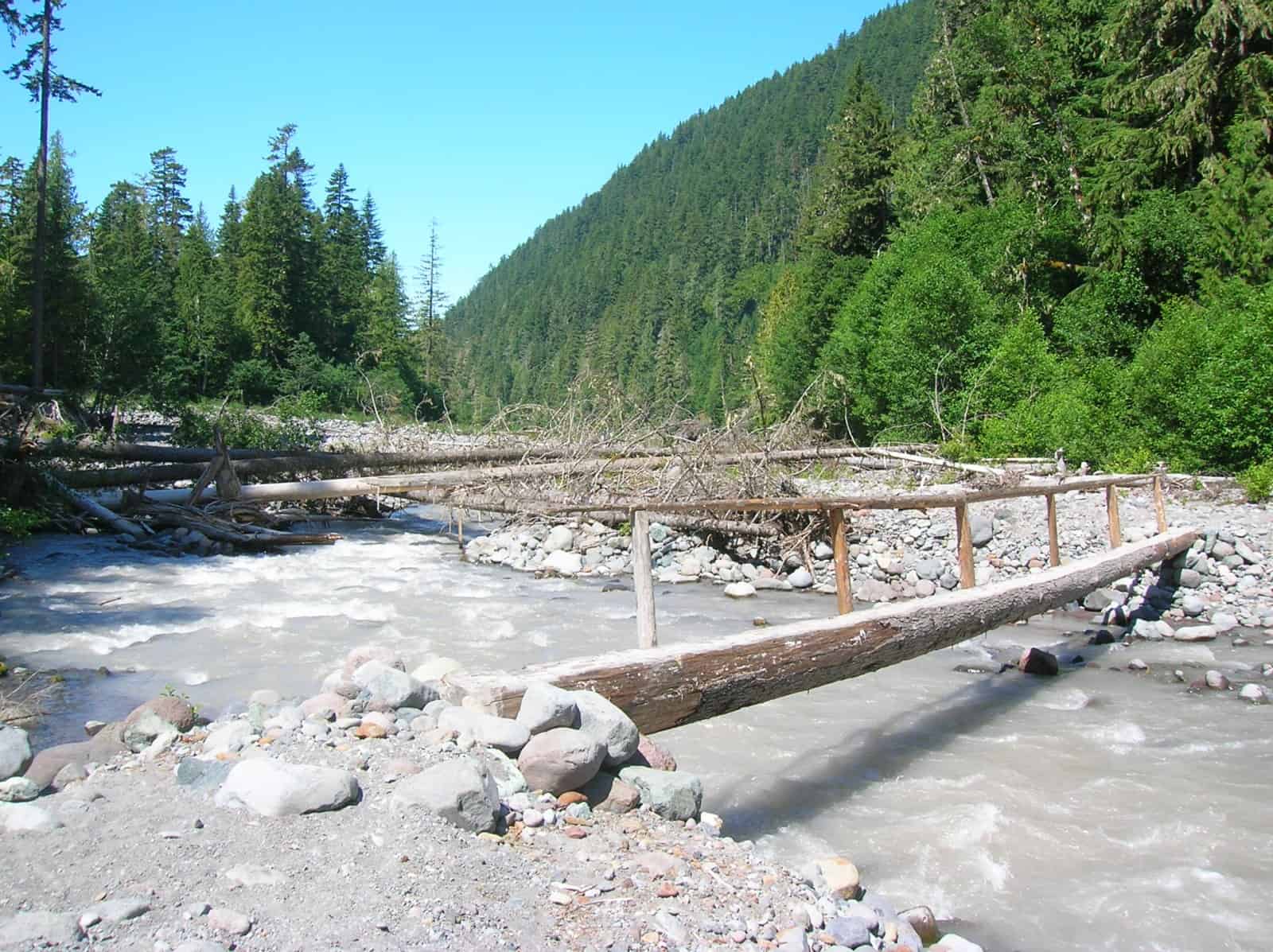 One of the quietest stretches of the around-the-mountain Wonderland Trail, Sunset Park lacks the in-your-face jaw-dropping views of Washington’s majestic snowcapped volcano-but also lacks the crowds. Backpackers that take to exploring Sunset Park with its handful of small shimmering lakes will be wooed instead by this area’s subtle beauty-its wildflower meadows, ancient forest groves, ridges shrouded in bear grass-and solitude. Sunset Park also hosts one of the nicest backcountry camps along the Wonderland Trail from where you can watch a setting sun brush the surrounding small lakes golden. It’s a softer side of Mount Rainier National Park that’s not usually experienced.

Start on the Paul Peak Trail, one of the least hiked trails in the national park. But despite this trail’s lack of notoriety, it is well maintained. You’ll start on a downhill course losing about 400 feet of elevation, before crossing Meadow Creek on a bridge in a cool dark ravine.n

Then slowly begin regaining some elevation traversing impressive stands of old-growth conifers. The way angles around Paul Peak forgoing its timbered summit. This trail’s beauty is in its cathedral forests and the deep serenity it offers. After climbing a couple of hundred feet in elevation, the trail once again heads downward. The descent is gradual at first-then plummets rapidly and steeply. A few semi-open area of windblown forest providing good views of “the Mountain” along the way give reason to pause.

At 3.3 miles you’ll reach the Wonderland Trail. Turn right here and continue to descend. Try not to think about all the climbing you’ll need to do on the return. At just shy of 4.0 miles you’ll come to the roaring, rushing glacial-silted North Mowich River. A sturdy solid log bridge thankfully allows for a safe crossing. Just beyond is the South Mowich River Backcountry Camp Area located in open forest on a bank above the roaring South Mowich River. Quite an audible contrast to the quiet Golden Lakes, this area makes for a great place to spend the night if you’re not intent to push on.

Continuing south on the Wonderland Trail you’ll cross the multi-channeled South Mowich River. Don’t fret the crossing however as the Park Service puts log bridges out in summer and fall. Be sure to pause mid-stream to marvel upriver at the churning gray waters roiling down from glaciers wedged between steep stark ridges. And be sure to cast a look downriver too to Paul Peak cloaked in ancient conifers.t

Once across the roaring river, begin a long and arduous climb. Be sure that your water bottles are filled as the upcoming ridge can be quite dry come late summer. The trail steadily gains elevation by way of long switchbacks ascending a steep ridge transitioning from big old cedars to hemlocks to firs. At 8.0 miles reach a small gap (el. 4,700 feet) high on a ridge draped in bear grass. Here an old trail leads right to a jeep track outside of the park. Consider following it for a short way to an open knoll granting excellent views of Mount Rainier.

The Golden Lakes are still a couple of miles away via the Wonderland Trail, but the going from here is now much easier. Traverse slopes of open forest and pockets of meadows taking in good views west and south-but only limited views of Mount Rainier partially hidden behind the long ridge known as the Colonnade.

Much of the surrounding forest you are now hiking through went up in flames in 1930 when a contractor commissioned to extend the West Side Road accidentally caused the ignition. Plans to complete the road were eventually extinguished along with the fire, and the forest is slowly recovering offering nice flower and bear grass displays in the process.

You’ll pass high above the largest of the Golden Lakes, before reaching the first of several tarns and small lakes along the trail. The Golden Lakes consists of about a dozen-plus subalpine bodies of water tucked on the high divide between the Mowich and Puyallup watersheds.

After attaining an elevation just shy of 5,000-feet, the trail descends slightly reaching a couple of lakes before arriving at the Golden Lakes Campground and Ranger Cabin at 10.3 miles. The cozy campsites are tucked on a small bluff beside a good sized lake which often warms nicely by late summer for a swim. Sunset views out to the western horizon can be had from the campground and Mount Rainier can be seen from the along the lake’s western shoreline.

For excellent views, wildflowers, and further exploring continue south on the Wonderland Trail deep into Sunset Park. After climbing a bit locate an old trail veering left approximately 2.0 miles beyond the ranger cabin. Take this trail for about a mile plus to a 5,700-foot knoll that once housed a fire lookout. Here you’ll get your grand views. Savor the scenery and solitude!n

Overnight permits required and can be acquired by making a reservation or in person at the Carbon River Ranger Station (360) 829-9639; www.nps.gov/mora;
Special rules: No Fires – use camp stove. Dogs prohibited;
Trailhead directions: From Buckley follow SR 165 south for 10.3 miles bearing right on road to Mowich Lake. Continue another 11.7 miles (pavement ends at 1.6 miles) to National Park entrance station and Paul Peak Trailhead.