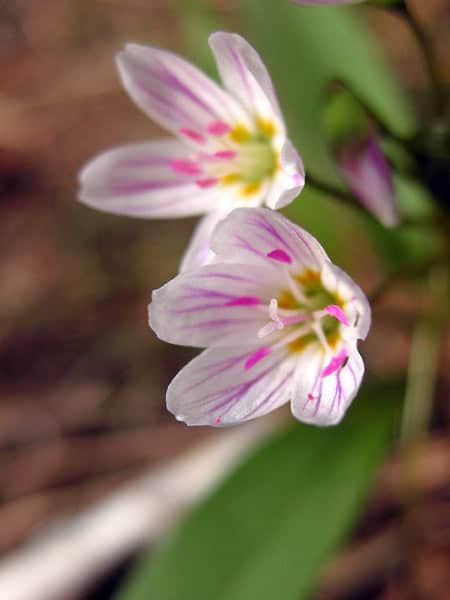 Claytonia lanceolata is a species of wildflower in the purslane family known by the common names lanceleaf springbeauty and western springbeauty. This plant is native to western North America as far south as New Mexico where it grows in foothills up to alpine slopes. It thrives in the rocky soil of alpine climates where the snow never melts. It is a perennial herb growing from a tuber one to three centimeters wide. It produces a short, erect stem reaching a maximum height of 15 centimeters. At its smallest the plant bears only its first two rounded leaves before flowering and dying back.Its thick leaves are helpful for storing water. If it continues to grow it produces thick, lance-shaped leaves further up the stem. The star-shaped flowers come in inflorescences of three to 15 blooms and they are white or pink, often with veiny stripes and yellow blotches near the base of each petal. The fruit is a small capsule containing 2 seeds, which are black and shiny. The Okanagon-Colville, Okanagon, and Thompson Native American peoples used the tuber of this plant for food and for animal fodder. There are 28 species of this plant spread across North America and East Asia.