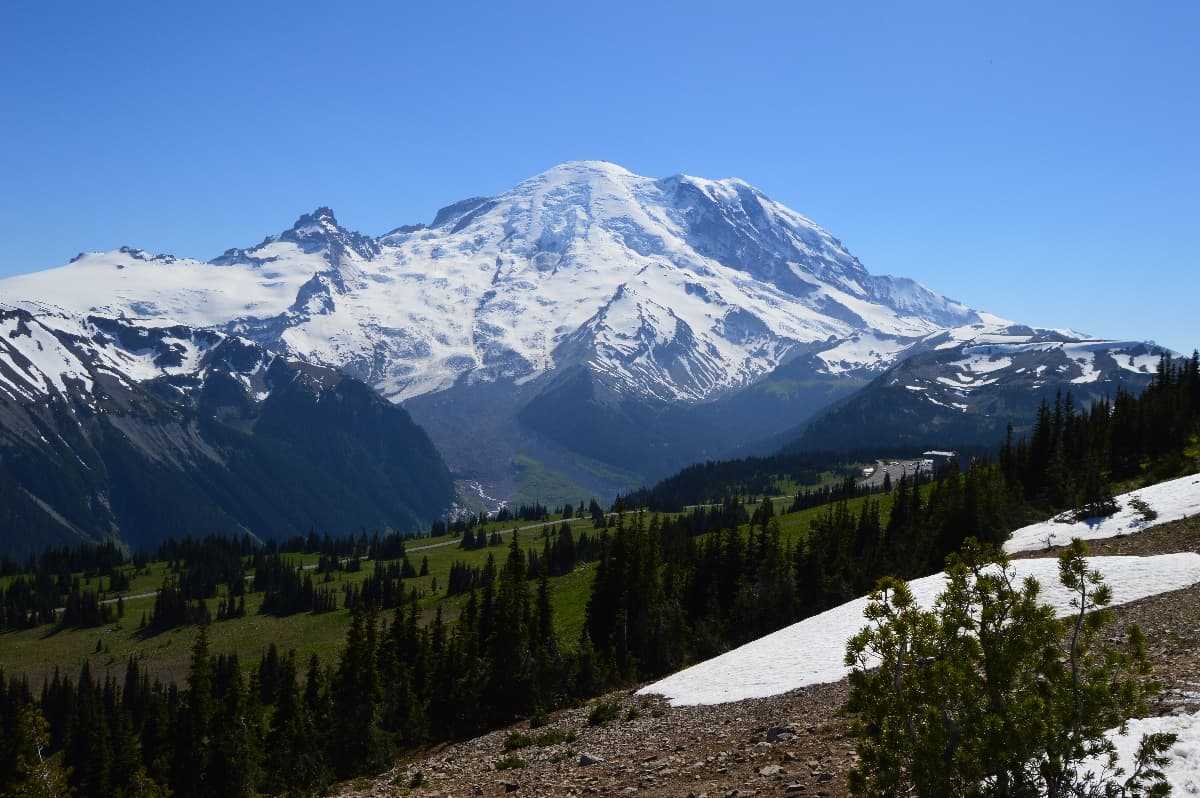 While Paradise with its legendary alpine meadows is the place most first time visitors to Mount Rainier National Park venture to—I prefer to introduce folks to The Mountain at Sunrise. As its name suggests, this is the first place Washington’s iconic peak is touched by sunlight each day. And it’s the part of the park I like for my first time visitor family and friends to be touched by Rainier.

Sitting at an elevation of 6,400-feet in the parkland meadows of Yakima Park, Sunrise is the highest point you can drive to at Mount Rainier National Park. With close-up views of the massive Emmons Glacier—largest glacier on the mountain; and hundreds of acres of meadows bursting with wildflowers; Sunrise rivals the more popular Paradise when it comes to scenic splendor. And situated in the park’s drier northeastern corner thanks to Mount Rainier’s rain-shadow effect, Sunrise is usually sunnier than Paradise too. Sunrise also is far less frantic than Paradise seeing far less visitors and hikers allowing me to give my Rainier newbie a more intimate introduction to the grand mountain of the Northwest.

This past June, I introduced my 6-month old son Giovanni to The Mountain—at Sunrise, naturally. No stranger to hiking, my intrepid little guy had already accompanied me on over 40 hikes from the Olympic Peninsula to several of the San Juan Islands. His introduction to Mount Rainier would include his first real mountain hike though—and to a peak over 7,000 feet high. Normally a summit of this dimension would be insurmountable to young hikers and outdoors newbies. But Sunrise with its lofty base elevation allows for easy kid-friendly adventuring into the high country.

After a two mile warm-up hike with his grandparents on the Silver Forest Trail—Giovanni, his mom, 75-year old grandma, and me—his full body Sherpa, were ready to take to the sky-probing Sourdough Ridge. Forming a serrated backdrop along the northern edge of Sunrise, this jagged ridge of several 7,000-foot plus peaks is quite imposing from the north. But from the south, the ridge’s slopes are far from frightening with gentle grades and carpets of meadows and patches of subalpine forest. Giovanni’s grandpa was going to pickup us up later at the Sunrise Point Trailhead allowing for us to do the complete ridge one-way, a variation I highly recommend.

A wide nature trail leaves the big parking lot to introduce hikers of all ages and abilities to what once was a remote and challenging destination. It was tenacious hardscrabble miners who bestowed the name Sourdough (after one of their popular campfire concoctions) on this ridge before these mountains would be included in America’s fifth national park. Droves of hikers wouldn’t discover this ridge until 1931 when the Sunrise Road was completed from the White River Valley far below.

In 0.3 mile the wide nature trail comes to a fork. We chose to head left for a longer ridge walk reaching the ridge crest in another .2 mile. Here as in just about every other point along the ridge you are granted sweeping in-your-face views of Mount Rainier and all of her glacial glory. Breathtaking views too of the Yakima Park emerald lawn rolled out below with its frolicking deer, marmots, and ground squirrels. And also from this point on the ridge occupying a broad saddle are heart-clenching views north into the emerald Huckleberry Basin far below and out to a seemingly infinite wave of verdant ridges succumbing to Puget Sound.

The Sourdough Ridge Trail heads left here 1.1 miles providing access to that remote basin below and to popular destinations like the Mount Fremont Lookout and Burroughs Mountain. But for my little hiker’s first foray into the Rainier high country a hike right (east) along the gentler Sourdough Ridge was more in order. We had to negotiate a few stubborn snow patches along the next section but nothing dangerous or insurmountable. At 1.0 mile we reached the other ridge access trail coming up from Sunrise and Giovanni’s grandma waiting to join us on the rest of the hike.

The well built and well maintained trail makes a beeline along the ridge at around 6,800 feet or so dipping to a saddle every now and then and then regaining lost elevation. The way skirts beneath craggy unnamed summits and 7017-foot Antler Peak, one of the more prominent summits on the ridge. There was lots of evidence of mountain goat activity in the form of snagged fur, pellets and hoof prints, but no goats.

The trail undulates between open subalpine forest and pocket meadows providing sweeping views out over Sunrise to Rainier and its massive Emmons Glacier giving birth to the crashing White River. At the saddles, we were granted views north that included massive Mount Stuart and its neighboring rocky spires flanking Snoqualmie Pass—and snowy volcano Mount Baker near the Canadian border.

At 2.2 miles we reached the junction with the short spur to Dege Peak. A must-do side trip, this 0.3-mile trail makes a sweeping switchback to the ridge crest before winding its way up to the top of the wide-open 7,006-foot summit. The 360-degree view is among the best in the park with views to second-highest Washington summit Mount Adams hovering over the Cowlitz Chimneys and Clover Lake sparkling below in White River Park. You’re also afforded a view west of the grandest park of them all—Grand Park—a mile long near level emerald lawn unfurled on a ridge above Huckleberry Creek. Best of all—this over 7,000-foot peak is attainable to just about all hikers including my 6-month-old little adventurer!

The namesake behind this prominent peak on Sourdough Ridge is interesting too, especially if you are from Tacoma. The peak was named for James Dege, a prominent Tacoma resident who came to the city in 1889 and once owned the largest clothing stores in the city. His home still stands in the city’s North Slope Historic District.

We eventually retraced our steps back to the Sourdough Ridge Trail junction and then began a long descent to Sunrise Point. Along the way the trail passes through pocket meadows providing excellent views down to Sunrise Lake and the wildlife-rich parklands surrounding it. At 4.0 miles the trail terminates at 6,100-foot Sunrise Point. Here, Giovanni’s grandpa was waiting to pick us up and hear our stories. The little guy was glowing—just like the mountain now in the late afternoon sun. And his dad can’t wait to bring him back to Sunrise for another hike.