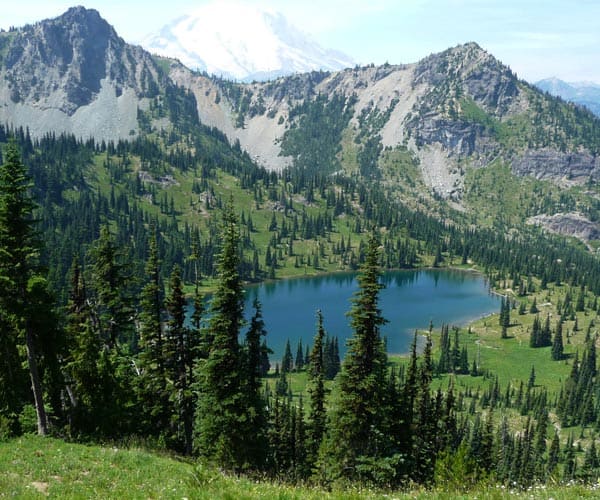 The origin of the trail is a little murky; the route doesn’t show on the Green Trails map yet it appears on the Mount Rainier map handed out to visitors when they enter the park. No matter, take two cars and hike this gem from top to bottom and enjoy!

We left one car at the Crystal Lake trailhead and drove to the Pacific Crest trailhead just a tad east of Chinook Pass where the hike begins on the PCT. In August flowers still blooming included harebells, asters, lupine, Indian paintbrush and pearly everlasting. By September most flowers are gone but meadows then turn golden and the fiery hues of mountain ash and blueberry shrubs compensate for the lack of floral displays.

Sheep Lake is an understandably popular destination, an easy backpack or day hike ideal for families. The pretty lake is just one of many delights found along the PCT. The PCT continues, gaining about 700 feet to Sourdough Gap (on a hot day you might be tempted to call it Sourdough Gasp). As you climb there are views of Sheep Lake below waves of receding ridges.

Sourdough Gap (N 46° 54′ 04″, W 121° 30′ 00″) is a slot in a peak-studded ridge that allows egress to high meadows and a continuation of the PCT. As we climbed toward the gap my eye was drawn to a fortress-shaped peak. It’s not designated on the map so later we looked it up in the Fred Beckey “Cascade Alpine Guide”. It is called Cupalo Rock but it’s no place for hikers – not even close! According to Beckey this hunk of rock has several routes ranging from Class 3 to low Class 5.

The trail was so easy to follow down to the lakes we believe it must have once-upon-a-time served as an official trail as there was evidence of long-ago trail work. Though hikers frequently use this trail, we didn’t meet anyone between Sourdough Gap and Crystal Lakes.

After another break at the upper lake we hiked the Crystal Lakes trail back to SR 410 and the vehicle we’d left there. We then drove back to Chinook Pass to complete the car shuttle and took our time driving home.