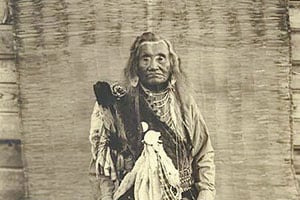 In August of 1870, Native American guide and hunter, Sluiskin, led a climbing party consisting of Hazard Stevens, Philemon Beecher Van Trump, and Edmund Coleman, intent on becoming the first people to summit Mount Rainier. Coleman who earlier became the first person to summit Mount Baker (its largest glacier bears his name) had to turn back due to gear problems. Stevens, a decorated Civil War Veteran and son of territorial Washington’s first governor Isaac (who Stevens County is named for) and Van Trump (who would later work to champion national park protection for the mountain) would go on to successfully summit the 14,411-foot volcano becoming the first documented party to achieve this goal.

“You make my heart sick when you talk of climbing Tahoma. You will perish and your people will blame me”, he said to them.

While Stevens and Van Trump are often cited as the first to reach Rainier’s summit, there is some debate among climbers and historians that others may have accomplished that feat first. But Stevens and Van Trump documented their ascent; and while met with some skepticism afterward, their observations appear verifiable. The fact that Sluiskin led them part way made this accomplishment more fascinating; for Native peoples of the region had an aversion to the mountain’s summit, believing that it was guarded by spirits and forces that were best left undisturbed. Sluiskin had earlier recounted to Stevens (who documented it in an 1876 article in the The Atlantic Monthly) that Rainier was an enchanted mountain, inhabited by an evil spirit, who dwelt in a fiery lake on its summit. No human being could ascend it, or even attempt its ascent, and survive.

But on August 8, 1870, Stevens, Coleman and Van Trump left Olympia for their climb not concerned over riling any spirits guarding the mountain’s summit. Once they left James Longmire’s road, Sluiskin guided them onto the mountain. Coleman dropped out before they got to Mazama Ridge where Sluiskin made his apprehension to continue known. Your plan to climb Tahoma is all foolishness. No one can do it and live. A mighty chief dwells upon the summit in a lake of fire. He brooks no intruders, he warned them (according to Stevens as recounted in Edmond S. Meany’s Mount Rainier: a record of exploration published in 1916). Sluiskin told them of his grandfather climbing the summit and nearly perishing from the infernal demon coming to destroy him. He spoke of the physical perils that awaited the men and implored them not to continue. You make my heart sick when you talk of climbing Tahoma. You will perish and your people will blame me, he said to them.

Nevertheless, the three continued the next day to what is now known as Sluiskin Falls and set up camp. The following morning, Stevens and Van Trump set off for the summit and reached it becoming the first known people to successfully summit Rainier. Upon their descent, Van Trump slipped incurring some serious bruises and gashes but was able to totter back to camp. There they were greeted by Sluiskin who was astounded that the men were real and alive. Apparently, they had thwarted the spirits guarding the mountain.