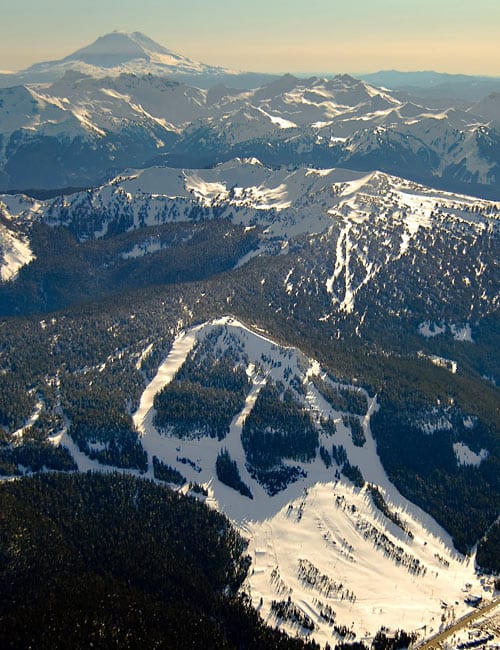 With the opening of Paradise Basin in 2010, you’ll be pleasantly surprised to find and ski a bigger, higher and better White Pass! Planned decades ago, Paradise Basin opened December 2010-increasing White Pass’s vertical drop to 2,000-feet and doubling its size to 1,500 acres, making it the 4th largest ski area in Washington. Costing $9 million to complete, the expansion included 13 new runs, 2 new quad chairlifts and a new lodge perched at 6,000-feet.

Nearly all of it intermediate terrain, the expanded area is serviced by the Basin Quad (accessed from an easy trail from the Great White Express); and the Couloir Express detachable quad which grants rapid transport to the 6,500-foot top of the basin. From here just beneath the summit of Hogback Mountain in the craggy Goat Rocks peaks, you’ll have access to some of the finest cruising runs and glades skiing in the Cascades; and all with mouth-gaping views of Mount Rainier hovering before you.

And if, while you’re schussing down one of the trails and you suddenly feel like you’re in the backcountry and not at a developed resort-there’s good reason for that. The ski area management team took extra care planning Paradise Basin to minimize environmental impact. There are no service roads in the new terrain, and the trails aren’t as wide as those gracing the lower slopes. There are lots of tree islands too in the new trails providing a wilder feeling and allowing for some easy glades skiing.

The upper reaches of the basin are pretty natural too-mostly open alpine meadows. And with its rolling and dipping topography, it appeals to boarders and skiers alike.

High Camp Lodge in the basin, is accessible by trails from both chairlifts. Its location makes it possible to spend the entire day at Paradise Basin; no longer necessary now to return to the base to warm up or get a bite-to-eat. But that doesn’t mean you have to shun White Pass’s lower slopes. Because with the all the new skiing terrain added, the lower slopes and lifts now have a lot more room for schussing and shredding.

Gentle and wide slopes perfect for beginners grace the eastern reaches of the ski area while challenging expert terrain can be found on its north face. Snowboarders looking to test their skills will find the Hammerhead Terrain Park to their liking. And skiers and boarders who don’t want to quit for the day, can keep on turning and carving with a little night skiing at three lower slopes on Saturdays and holidays.

White Pass also offers Nordic skiing. Across from the downhill slopes on the north side of US 12, you can kick-and-glide on over 18 kilometers of groomed cross-country ski trails through lovely old-growth forest and around Leech Lake.

With its Kids’ clinic; and events like Hope on the Slopes 24 hour Slide for the Cure, and the annual Winter Carnival in March; White Pass has long been touted as a family resort. And now with the addition of Paradise Basin, White Pass has even more to offer to skiers and snowboarders of all ages and abilities.