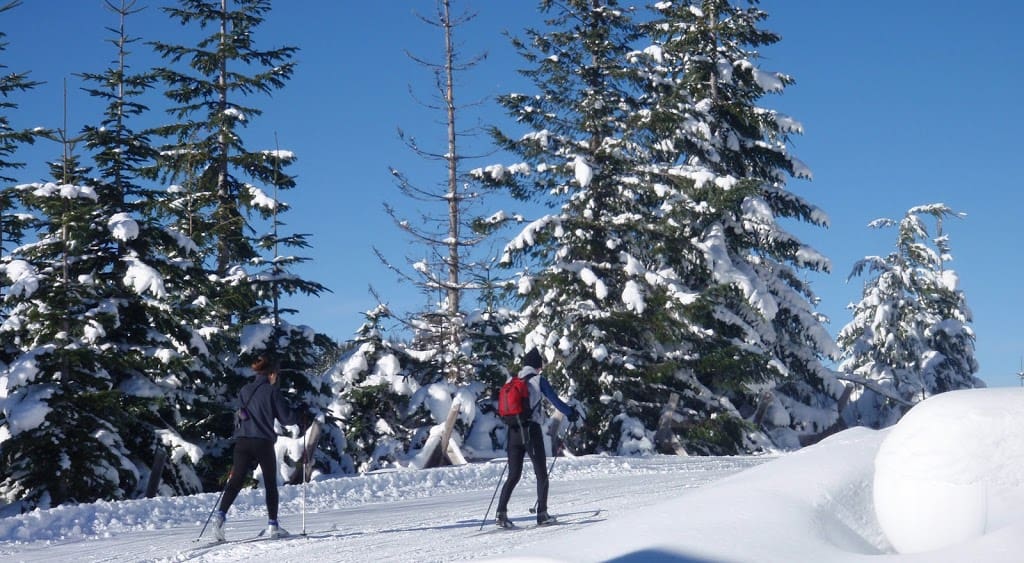 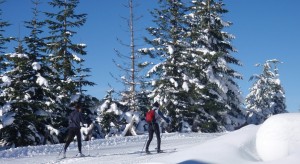 From where I’m sitting, I can see the light slowly bleeding out of the day. It’s about 5:00pm, the end of the evening at this time of year; the beginning of what will be a cold winter’s night. The remains of the sunset are a wash of dark orange and red, gradually fading to indigo.

All of this however, is happening outside the window. It may be frigid out there, but in here, in front of the fire, the coming night is anything but a hardship. I have a prime seat on the couch, a drink in one hand and a bowl of pistachios at my side, and I watch the setting sun as though it is a film and I am its reviewer. As the curtain of night finally falls, I applaud inwardly, giving the show a solid four-star rating.

I am spending this night in the Copper Creek Hut, part of the Mount Tahoma Trails Association’s collection of backcountry retreats. The word “hut” is a gentle misnomer to be sure, conjuring up stark images of substandard housing. These accommodations should in my opinion, be called a chalet, a descriptor that would more accurately reflect its comparative luxury and comfort. In the middle of a winter wilderness, where all around is covered in deep snow, where tonight’s outside temperatures will fall into the teens, I am warm and dry, reclining on a soft couch in front of a propane fire. This is no hut. 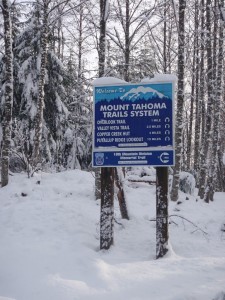 Although it seems a million miles away from that other world, getting here was remarkably straightforward. I drove first to Whittaker Mountaineering in Ashford to reserve my spot at the hut – reservations are handled at the shop and cost a mere $15 per person – and then I traveled the logging road approach to the snow-park, climbing from the green of the Nisqually valley up into the high country. The trailhead is at about 3200 feet, and I parked in the plowed shoulder near the gate.

After exchanging street clothes for polypro and fleece, I stepped into my bindings and worked my way up the steep, unplowed approach. It’s about 4 miles from the parking area to the hut and it was already after 2:00pm. I came to another snow-park about 20 minutes farther in, completely buried under several feet of new snow, but just past that, I came to the point where the trail grooming began and the progress got markedly easier.

There’s about 1000 feet of elevation gain between the parking lot and the hut, and most of that seems to be in the first mile. Once on the groomed trail, which is actually a well-graded logging road, progress was relatively easy and the way was well signed. I arrived at the hut just in time to view the twilight show, and in a matter of minutes, I was settled in for the night. 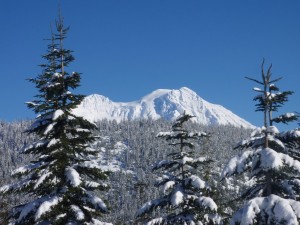 The hut is a fully equipped wilderness lodge, providing for up to fourteen occupants. Travelers need to bring food and a sleeping bag, and very little else. The propane heating stove lights with the push of a button and the four-burner cooking stove is more than capable of preparing any meal. Pots and pans, plates, cups and utensils are all there in the kitchen cupboards and drawers; elsewhere in the living area, there are books and board games, just in case you should tire of looking out the windows or gazing at the flames in the hearth.

There is also a log book, a journal filled with the wit and wisdom of those who have been here before. I read through it slowly, like a time-traveler, looking for names I recognize, people I know who have come and gone from this place. Later, although the designated sleeping area is upstairs, I close my eyes and drift off right there on the couch. On this most perfect of backcountry evenings, I am Copper Creek’s only occupant.

I awaken just before sunrise to clear skies and territorial views. To the northeast is Mount Rainier, frosted in white like some crazy massive wedding cake. The sunrise is taking shape in the eastern sky and the rising light is bouncing off the snow, giving shape to the trees and the individual features all around. Slowly the sky turns from black to purple to blue, and as soon as the burning sun crests the mountains, the day begins in full color. 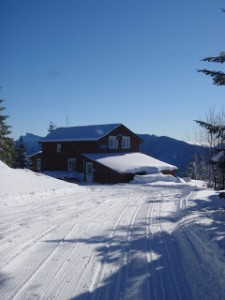 I make breakfast, a toasted bagel and cream cheese, with stout, hot coffee. I go outside and take a few pictures, then beat a hasty retreat to the warmth and luxury of the hut. After one night, this place already feels like home.

I’m drinking more coffee, working my way through a jigsaw puzzle, when the snow-cat arrives. Brian, the driver, comes inside for a half-hour and passes the time, helps out with the puzzle, then goes on his way once more. It isn’t long after that, that the first skiers of the day start to show up. They arrive in pairs, leave their skis by the door and come inside noshing on snacks as they warm up by the fire. The hut is supposed to be full on this night, a dozen people or more, but I am not going to be one of them. It’s starting to feel like it’s time for me to get on my way.

The return to the car goes quickly. Mostly downhill, on freshly groomed corduroy, it’s a fast track. Too fast, maybe. I try to stay in the moment, but I find that I’m already thinking about the next time.