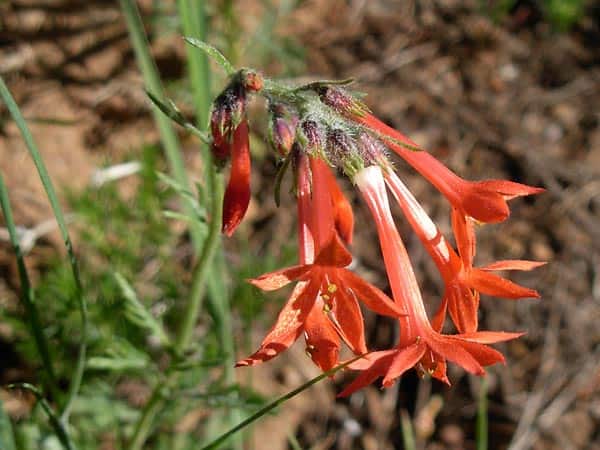 Since its discovery in 1814 by Frederick Pursch, the plant has undergone many name modifications. The current scientific name of “Ipomopsis,” Latin for “similar to Ipomoea” or Morning Glories, refers to its similarities between the Morning Glories’ similar red tubule flowers. “Aggregata,” “brought together” in Latin refers to its petal growing pattern. Common names include scarlet gilia, scarlet trumpet, and skyrocket. The potent smell from glands within its basal leave formations grant it the name Skunk flower. In some areas it is also called honeysuckle, owing to the shape of the flower and the droplet of nectar that can be enjoyed by picking off the flower and sucking it out of the basal end. The common name of Gilia (once a component of its scientific name) is pronounced “Gee-lee-uh,” an Italian pronunciation, after its original namesake, Italian scientist and clergyman Filippo Luigi Gilii. “Ipomopsis aggregata” is characterized by the USDA as a native species for the continental United States and Canada.It is native to western North America, growing mainly in the central to western regions and ranging from as far north as British Columbia to Mexico. “Ipomopsis aggregate” has characteristic red, trumpet-shaped flowers and basal leaves stemming from a single erect stem. Depending on elevation, height can range from 12 inches, in Rocky Mountain alpine areas, to over 5 feet, in areas of southern Texas. Trumpet flowers can range from white, red, orange-red, and pink. Pink flowers are especially common in high mesa areas of Colorado, such as the Flat Tops, Grand Mesa, or the Uncompahgre Plateau. Yellow flowers have been reported for plant but are extremely rare. Fernlike leaves are low to the ground, helping encourage warmth in colder areas, and have silver specks and a fine white pubescence. A well known delicacy in nature, “Ipomopsis aggregata” is well adapted to herbivory, as it can regrow multiple flowering stalks once lost. Although herbivory initially reduces seed and fruit count of the plant, intermediate herbivory and its stimulating factors could lead to the plant growing larger over time. Elk and mule deer are common herbivores on “Ipomopsis aggregata”.