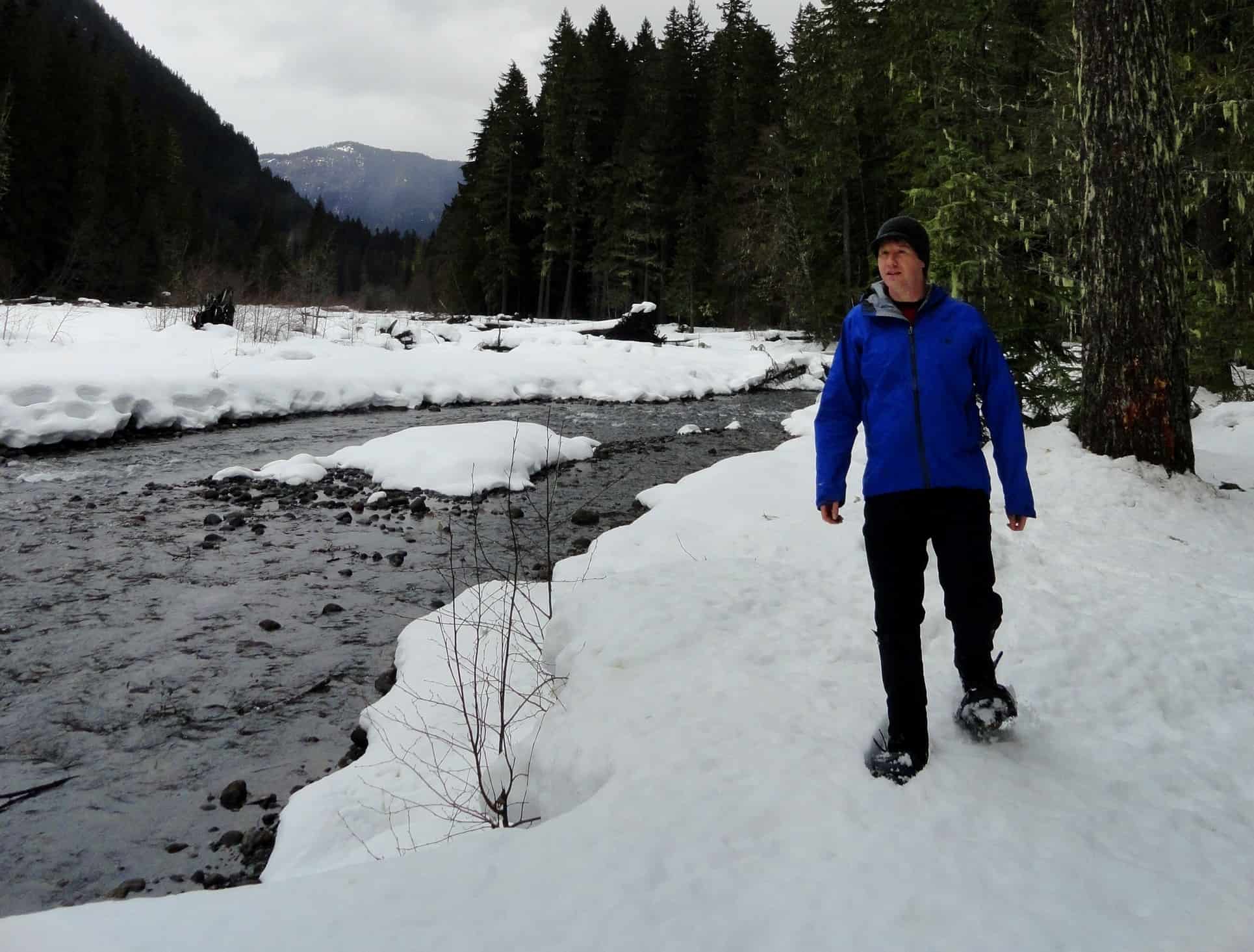 The River aka Blue Diamond Trail is flat and easy and perfect for the whole family. Amble along the noisy White River on a soft white carpet beneath an impressive emerald canopy. River views are good, the forest is grand, and a few surprises await you on this little-known yet easily accessible trail.

Starting from the Silver Creek Sno-Park, follow ski and snowshoe tracks to SR 410, closed here to traffic in winter except for state highway vehicles accessing maintenance sheds a couple miles up the road. Cross the road near the National Park Entrance Arch and look for trees sporting blue diamonds. You’ve found the trail-referred to by many as the Blue Diamond Trail and by others as the River Trail. It’s not on maps and not well known, but it’s well marked and a pure delight to snowshoe.

Follow the diamonds and occasional arrows through an open forest of hemlock, cedar and Douglas-firs-some quite old and big. The way soon comes to the White River forming here the boundary between Mount Rainier National Park and the Mount Baker-Snoqualmie National Forest. Snoop around the open river bank and admire the steep thickly forested slopes of Slide Mountain across the river. Look downstream as well to the cliffy prominent Palisades hovering over the river valley. Look for elk too which winter in the valley.

Now walk north downriver meandering through groves of big trees and passing by openings along the glacier-fed river. The trail skirts behind the old Silver Springs Guard House. Built during the Great Depression by the Civilian Conservation Corp, this eloquently rustic structure now serves as a visitor’s center during the summer months.

Continue walking north and soon come to the first of two odd and intriguing steel sheds. What are they? Well enforced privies? Bear and bomb proof food caches? Cold War atomic bunkers? They’re old powder magazines! Denny Coughlin, Special Use Administrator for the Mount Baker-Snoqualmie National Forest helped diffuse this mystery for me. These structures were used back in the 1940s and 50s for housing explosives used for building logging roads and for avalanche control when SR 410 used to be kept open all winter. They were used until the 1970s and there used to be three of them. It’s a mystery as to what happened to the third shed. Of course if you are snowshoeing with young adventures feel free to tell whatever tale you care on the origin and function of these interesting structures in the woods.

Continue following the blue diamonds eventually entering the Silver Springs Campground. The trail carries on through the attractive campground terminating not too far from the campground’s main entrance. Here at 1.6 miles from your start, you can turn around and begin retracing your journey back to your car-or explore some more. The campground’s loop roads through old-growth timber and along the White River make fine snowshoeing routes and you can amble along them for some time. At the northern end of the campground you may want to venture a little way into the woods and if the snow isn’t too deep, look for the Henry C. Allen gravesite marked by an engraved marble tombstone.

At 15 years old, Allen ran away from home to join the 16th Wisconsin division to fight in the American Civil War. He returned home afterward marrying and having three daughters. After his wife passed away, Allen came west settling in Buckley. He then sent for his three teenage daughters to come live with him. He spent much time in the White River Valley hunting, surveying and trapping. One winter day in 1896 he didn’t return, and his family knew something was wrong. One of his daughters along with a friend went looking for him, finding him several days later propped up against a tree. He had either died of hypothermia or a heart attack. After making a makeshift grave, the daughters decided to have him permanently put the rest at this spot because of his deep love for the White River Valley and the surrounding wilderness. A few of his descendents still live in the valley and if you return to this spot in the summer you’ll find the grave decorated with a flag and flowers.