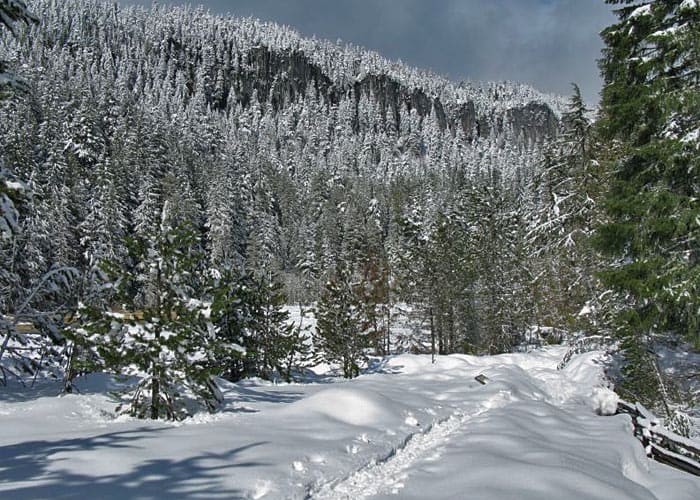 As we geared up for our first snowshoe trip of the season at Longmire, we felt we had stepped into a black and white photograph. It was a black and white day with white snow and dark evergreens against a white sky. Today we would snowshoe the Rampart Ridge Trail, a great choice for beginning snowshoers. It’s a top pick as it doesn’t require the drive to Paradise, which in turn, allows for more time spent on the trail. It’s a route that flip-flops between the winter wonderland of quiet forest and the open ridgelines of mountainsides.

At Longmire, there was little snow other than a few patches along Trail of the Shadows, the nature trail where the Rampart Ridge hike begins. Previous hikers had preferred to bare-boot the trail rather than use snowshoes though it was snowy enough that some type of traction devices was necessary. This was my friend’s first snowshoe hike and since the trail was icy, she and I wore our snowshoes so she could get a taste of what it’s like (perhaps the most challenging aspect of snowshoeing for a first-timer is how to put the snowshoes on and after a summer of hiking, I have to think twice too). The two other members of our group preferred to start out on the trail wearing their boots.

Trail of the Shadows is located directly across from the Longmire Inn on the Nisqually-Longmire Road. Park in the Longmire parking lot and the trail begins across the highway. Once on the trail, turn clockwise and hike through the evergreen-bordered trail and past a snow-covered marshy meadow. The route turns uphill at the Rampart Ridge trail junction.

As we began our ascent, our snowshoeing novice mentioned she’d had a fantasy of her first snowshoe trip being lots of white, fluffy snow on a level trail; obviously this trip would fall short of her expectations as it seemed unlikely we’d find that kind of snow anywhere at Mount Rainier other than at Paradise. With short days and a comfortable start-time as opposed to the obligatory crack-of-dawn start needed for the drive to the Paradise from Seattle, this Rampart Ridge snowshoe at Longmire is a top pick because it allows for more time to be out on snowshoes.

Continue on through the winter wonderland around you. Dark evergreens stand in stark contrast to the snow-covered forest floor; cut logs are fanged with icicles that reached to the ground.

At about 4,100 feet, reach the designated viewpoint where on this day, the snow was certainly deep enough to warrant snowshoes, especially if you’re completing the loop rather than hiking back the way you came. The overlook provides good views of Longmire, the Nisqually River, and Tumtum Peak.

Conditions for us were not hiker-friendly at the viewpoint and so we did not linger. A cold, wind had come up churning the boughs of evergreens and dropping the temperature significantly. Our novice’s fantasy of fluffy snow was not to be – and she and another member of the group opted to retreat to Longmire for a hot drink in the lounge. However, the two of us continued on, wanting to complete the loop.

From this point the snow soon deepened. Snowshoe tracks began to replace the boot tracks on the trail; the snowshoes were needed. We could feel the snow on our faces as we hiked above the ramparts for which this trail is named.

Once upon the ridgeline, take time to listen to the trees rustling in the wind. Soon the trail re-enters the protection of the forest before traversing across an open slope. On a clear day there are fine views of Mount Rainier, Chutla and Eagle peaks and the Nisqually Bridge spanning the outflow of the Nisqually glacier. Today it was too overcast to see Mount Rainier, although we were able to make out the other peaks.

The slope was covered with fresh snow beginning to drift though although we were still able to follow the track (keep in mind that with more snow this slope is prone to avalanche). And soon, we were again, back into the snow-covered forest.

In amongst the trees, the trail is mostly level for the next half-mile or so. The snow is often much deeper on this end of the loop; we saw only a faint imprint from previous snowshoes. Take time to marvel at the monsters formed of icicles and cut logs beside the trail. It’s a photo op not to be missed.

Having hiked the loop in summer, we knew approximately where the junction with The Wonderland trail would be, but fresh snow changes everything. Be sure you don’t miss the Wonderland Trail sign at the junction (N 46° 46′ 00, W 121° 48′ 31); otherwise, you might be on your way to Indian Henry’s Hunting Ground five miles further (a much more strenuous trip and impossible given the time of day and depth of snow).

At the Wonderland Trail junction, turn right to return to Longmire. At this point in the season, enough snow had already fallen (with much more to come) that it would just be a matter of time before the signs will be under snow; at which time we can only recommend this route to expert hikers with route-finding skills. Along the trail, pass a signed junction to Mildred Point (a splendid snowshoe trip when avalanche danger is low), another snowshoe option for another day. Just a way down the trail come upon a treat for snowshoers; the forest opens up to a tremendous view of the ramparts.

Soon the highway comes into view. Cross the road (N 46° 45′ 13, W 121° 48′ 48) and pick up the Wonderland Trail again on the other side. At that point for us, the snowshoes were overkill though we wore them until Longmire came into view.

It was 2:30 pm when we stomped into Longmire Inn carrying our snowshoes and packs. However, by the time we got driving, food was on our minds.

We stopped at the nearby Copper Creek Inn Restaurant for dinner. Although the power was out, they had a generator and so we could order anything we wished; it would just take a little longer. The soft light from generator-driven lamps gave the restaurant a candle-lit glow as a woodstove cheerfully crackled in a corner. The atmosphere was cozy and merry, the food, delicious, the staff, gracious.