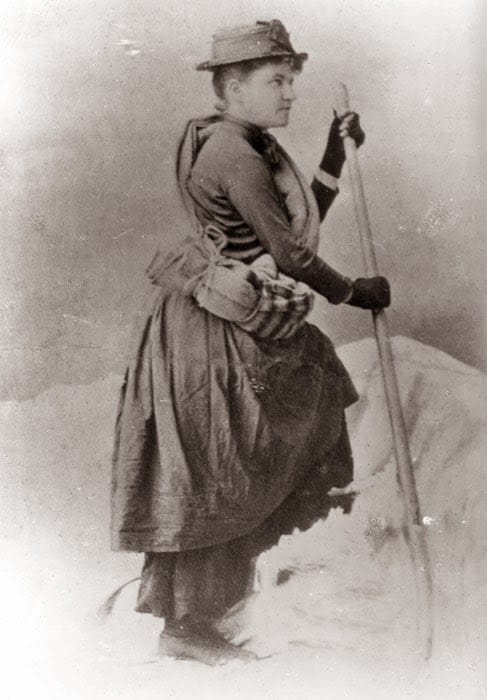 Rainier Notable for…
Lived:  1869 – 1958
In the summer of 1887, just five years after her family left the East Coast to resettle in Tacoma, Fay Fuller age 17, made it her goal to someday climb Mount Rainier. Evidently, her first trip to Paradise inspired her to want to someday “climb to the summit of the great peak;” and to boldly go where no woman has gone before. Three years later, Fay was on her way to summiting the 14,411-foot mountain.
Philemon Van Trump, who along with General Hazard Stevens in 1870 became the first persons to summit Rainier, invited Fay, now a teacher and journalist living in Yelm, to an outing at the mountain in August of 1890. There he granted Fuller permission to join a summit-bound climbing party headed by Reverend Ernest C. Smith. On August 9th, Fuller, dressed in flannel underwear, a thick flannel bloomer suit, woolen hose, heavy calfskin boy’s shoes with caulks, and a small straw hat-an arrangement she described as “immodest,” set off with her climbing party.
They were joined that evening at Camp Muir by Leonard Longmire. At 4:30 a.m. the next morning, Fuller accompanied by Smith, Longmire, W. O. Amsden, and Robert R. Parrish, set off for the summit.  Fay Fuller age 20 became the first woman known to summit Mount Rainier. She described standing on top of Washington’s iconic summit as “a heavenly moment” and a sensation that can only be known to those who have reached such heights.
Her party opted to spend the night on the summit since it was too late in the day to safely descend. They hunkered down in an ice cave created by steam vents. Contending with strong sulfuric odors and feeling nauseous from altitude sickness, Fuller was surprisingly able to get some sleep. At 6:30 a.m. facing gale winds and treacherous icy slopes, they made a slow and dangerous, but successful descent. They spent five days afterward at Paradise recovering from the climb; particularly from severe wind and sunburn.
Fuller would continue to be inspired by the Mountain and go on to champion woman climbers and advocate mountaineering. She wrote much about the Mountain and mountaineering and helped founded several climbing clubs, including the Washington Alpine Club in 1891 and the Portland-based Mazamas in 1894 (formed while on Oregon’s Mount Hood). In 1897 she would again climb Rainier, and spend the night there once again. Fuller died in 1958 at the age of 88. Fay Peak overlooking Mowich Lake is named in honor of her.
For biographies of other personalities making history on Mt. Rainier, click here.
Craig Romano, Guidebook Author and Outdoors Writer