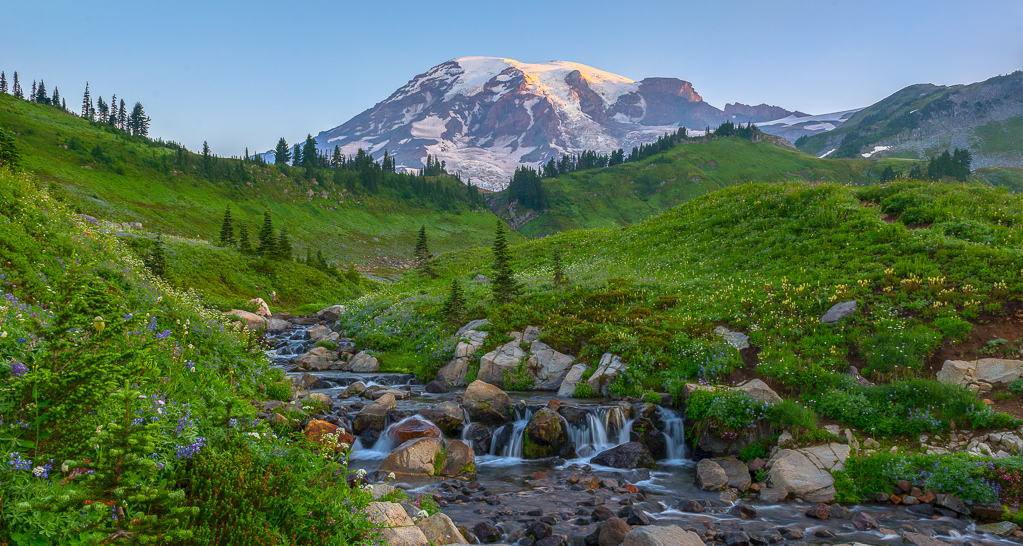 LOCATION: SW corner of the park

Mount Rainier National Parks busiest and most dramatic visitor center, the aptly named Paradise is rightfully the park’s classic showcase. It was back in the late 1800s when park pioneer James Longmire’s daughter-in-law, Martha, proclaimed upon reaching this mile-high flower-studded valley, “Oh, what a paradise!” And those same words have been uttered since by millions of others after they visited this spectacular subalpine vale.

Nestled on the south slopes of the glacier-shrouded volcano at an elevation of 5,400-feet among wildflower meadows punctuated with glistening snowfields and groves of gnarled firs and hemlocks; there are few locations within the entire national park system this stunning.

Getting to Paradise is easy; just follow the main park road eleven miles east beyond Longmire. And aside from its breathtaking scenery and role as a portal into the surrounding wilderness, park visitors will find a wide array of services and activities at Paradise.

Start at the new Henry M. Jackson Memorial Visitor Center, named in honor of one of Washingtons’ longest-serving and most influential senators. Opened in 2008 at a cost exceeding $21 million, the center is smaller and more energy-efficient than the one it replaced and blends in better with the surrounding environment. The old 1960s built center with its futuristic look which many visitors likened to a flying saucer, was a concrete behemoth requiring tens of thousands of gallons of diesel fuel to heat each year. The visitor centers’ architecture is truer to the area’s historic and natural setting.

Enter it through large fir and cedar doors to a warm and well-lit interior. Gaze out through massive windows north to the hulking mountain and south to the serrated Tatoosh Range. Enjoy displays on the mountains flora and fauna and learn how these species survive in such a harsh and snowy environment. Be sure to also check out the centers’ intriguing mountain climbing exhibit and geology displays. And catch a short film on the park at the small theatre also housed within the center.

You can also find a cafeteria, book and gift shop, information booth, and guided ranger programs at the new center. The Henry M. Jackson Memorial Visitor Center at Paradise is open daily from mid-May through early October, and on weekends the rest of the year.

Situated next to the center is the historic Paradise Inn, offering lodging and dining in undoubtedly one of the most superb locations within the nation. Constructed in 1916, one year after the road to Paradise was opened to the public; this beautiful 121 room lodge was built in the classic National Park Rustic Style. And it was designed to visually tie into the surrounding landscape by utilizing area materials such as fire salvaged silvery timbers. The inn is listed in the National Register of Historic Places and contains many structural and furnishing delights such as a great hall, big stone fireplaces, grandfather clock, and furniture constructed from local materials. The inns piano was detailed with peeled heavy log corner-posts with whittled ends. And it was played by President Truman during his visit in June 1945. The inn is open from mid-May through early October. There are no other lodging options at Paradise. The nearest campground is located seven miles west at Cougar Rock, and there is a lovely picnic area located just south of the lodge.

Near the visitor center and inn are two other historic structures; the Paradise Ranger Station and the 1920-built Guide House. The guide house is now home to the Paradise Climbing Information Center, where you can secure permits during the summer months for backcountry camping and climbing. Most of the parks 10,000-plus annual summit bound climbers begin their arduous and rewarding quest from Paradise.

It is also in Paradise where you’ll find some of the parks’ most popular hiking trails. The wildflower saturated meadows surrounding the visitor center are legendary, and folks come from all over the world to delight in their splendor. Marvel over anemones, lilies, saxifrages, valerians, penstemons, harebells, hawkweeds, Indian paintbrushes, lupines, arnicas, monkeyflowers, cinquefoils, larkspurs, shooting stars, and scores of others spanning the color spectrum. Peak flower season varies year to year ranging from mid-July to early August.

Set out to photograph the dazzling blossoms painting the surrounding ridges and knolls by taking to any of the radiating trails from Paradise. Choose from gentle paths like the paved 1.0-mile wheelchair accessible Nisqually Vista Trail overlooking the massive Nisqually Glacier; to longer and more adventurous outings like the 5.0-mile snow probing, waterfall and cliff skirting Skyline Trail with its jaw-dropping views of Mount Rainier and surrounding peaks. Experienced and properly equipped off-trail travelers can continue to the Muir Snowfield.

In winter, Paradise transforms into a snowy showy winter wonderland for snowshoers and cross-country skiers. Averaging nearly 700 inches of snowfall per year, winter sports enthusiasts can enjoy their pursuits well into spring. And winter sports enthusiasts have a long and colorful history at Paradise, beginning when pioneering Rainier skier Olive Rand took to the mountains slopes in 1911. In 1935 the US Olympic downhill ski team held their tryouts at Paradise. In 1937 concessionaires built a rope tow to service Paradises slopes. Three years later they added a t-bar. The Army’s 10th Mountain Division trained at Paradise in 1942 before being deployed to the Italian Alps during World War II. The lifts came out in the 1970s, as they were no longer viewed as being compatible with the park. But you can still ski Paradises invigorating slopes by hiking up-passing en route an old teepee shaped hut which once serviced the rope tow.

The Road to Paradise

The road to Paradise from Longmire is open year-round, but all drivers traveling it from November 1 to May 1 are required to carry chains. The park service gates the road nightly at dusk and reopens it after plowing is complete. The road is occasionally closed due to adverse weather, so check with the park on the road’s status before visiting.

But no matter how and when you arrive here, you’re sure to utter, “Oh, what a paradise!”