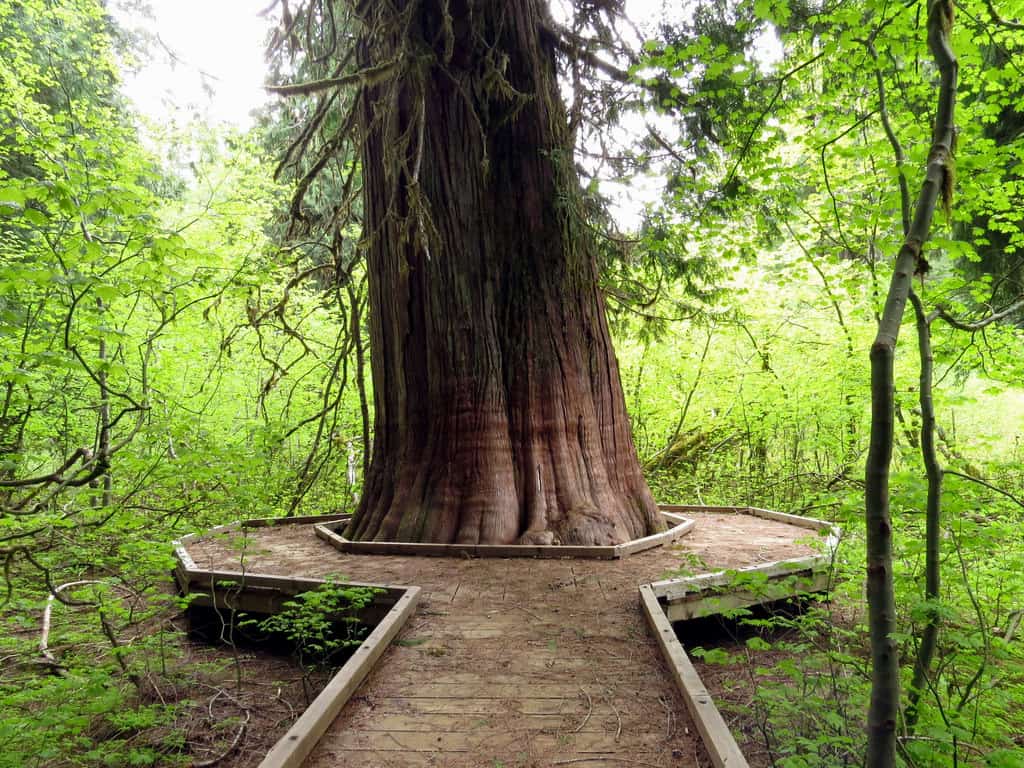 Location: SE corner of the park

Nestled in majestic old-growth forest on the banks of the crystal clear cascading river of same name, Ohanapecosh welcomes visitors to the national park’s lush, emerald southeastern corner. At an elevation of only 1,900 feet and surrounded by deep primeval forest, Ohanapecosh offers quite a contrast to the alpine meadows and snowfields found in the park’s higher elevations. Visitors to Ohanapecosh won’t find any lodging or food service like at Longmire, Sunrise, and Paradise, but instead can set up their tent or RV in the park’s inviting campground. And due to Ohanapecosh’s low elevation and sheltered environment (sitting somewhat in a rain-shadow), the campground opens earlier and closes later than the park’s Cougar Rock and White River campgrounds.

Ohanapecosh lies just 10 miles north of Packwood where lodging and food service is available. But for many years, Ohanapecosh was home to a lodge catering to guests intent on enjoying the area’s hot springs. The Ohanapacosh Hot Springs consisted of more than a dozen springs (some as hot as 120 F) flowing from a forested bench into the Ohanapecosh River. In 1913, while this area was within national forest lands, Eva O’Neal established a commercial tent camp at the springs. Owing to the springs growing popularity, local entrepreneur N.D. Tower developed a resort at them in 1921. By this time thousands of folks were flocking to the springs for their supposed therapeutic powers.

With the help of investor Dr. Albert W. Bridge, Tower contracted a road crew to construct a road to the springs from Packwood. From the west however, it was a 16 mile hike by trail. The road through Stevens Canyon wouldn’t open until 1957. By 1925, Bridge and Tower had constructed a small hotel and two bathhouses in addition to a tent camp and several cabins. They had grandiose plans for the springs to build a great resort and sanatorium like the one at Hot Springs, Arkansas (now a national park). Administrators for Mount Rainier National Park had long wanted to acquire Ohanapecosh and not see it intensely developed.

In 1931, Mount Rainier National Park was expanded east by 34,000 acres all the way to the Cascade Crest. The Ohanapecosh Hot Springs were now within the park, and the resort was allowed to continue on its current small scale. During the Great Depression, numerous folks with rheumatism and other maladies camped at Ohanapecosh for weeks and months at a time to soak in concrete pools or at the bathhouse. And while the resort eventually added more cabins in the 1940s, the facilities were considered substandard and an embarrassment to the park.

Plans by park officials were made to cease the resort operation, but a new owner took over dragging out the process for several years. By 1960 however, the resort was closed down and by 1967 all of the buildings were removed.

Nothing remains of the old resort, bathhouse and soaking pools. The park service has allowed the springs to revert back to their natural state. You can check out old pictures of the resort in the visitor center and then grab a self-guiding booklet and set out on a delightful nature walk to the springs. All that remains of the springs now are boggy seeps which languidly flow into the nearby river. There are no soaking pools; but you can always take a dip in the river if you feel compelled. It’s a refreshing 40 degrees F.

Throughout the summer, rangers lead walks and conduct lectures on the hot springs and other facets of the park. Many programs meet at the amphitheater which also provides evening programs for campers. The campground, largest in the park with 188 sites accepts reservations and is open from late May until mid-October.

There are some wonderful hikes that begin from or start near Ohanapecosh. The visitor center is a good source for hiking information and a wide array of hiking guides, books, and maps can be purchased there. An excellent kid-friendly hike right from Ohanapecosh is the 2.7 mile loop to spectacular Silver Falls. The 40-foot falls thunder through a narrow rocky chasm into a sparkling splash pool.

Another spectacular and easy family-friendly hike is to the Grove of the Patriarchs. Hike along the Ohanapecosh River to a lush island harboring an ancient cathedral forest of towering western red cedars and Douglas-firs. Some of these gargantuan trees are over 1,000 years old. The hike is an easy 1.3 mile roundtrip from the Stevens Canyon Road or a longer 5.0 mile roundtrip from Ohanapecosh.

Longer all day hikes in the area include the riverside East Side Trail; the quiet Cowlitz Divide Trail; the exhilarating Shriner Peak Trail to one of the park’s historic fire lookout towers; and the Laughingwater Trail to the remote and set in deep timber Three Lakes. The Laughingwater Trail is also one of the few trails within the park open to equestrians. It ties into the Pacific Crest Trail offering long excursions for horseback riders and backpackers alike.

And if you’re wondering about where the word Ohanapecosh came from-there are various explanations to its origin. One of the more commonly accepted ones is that it is an Upper Cowlitz Indian name meaning, “clear stream or deep blue.”