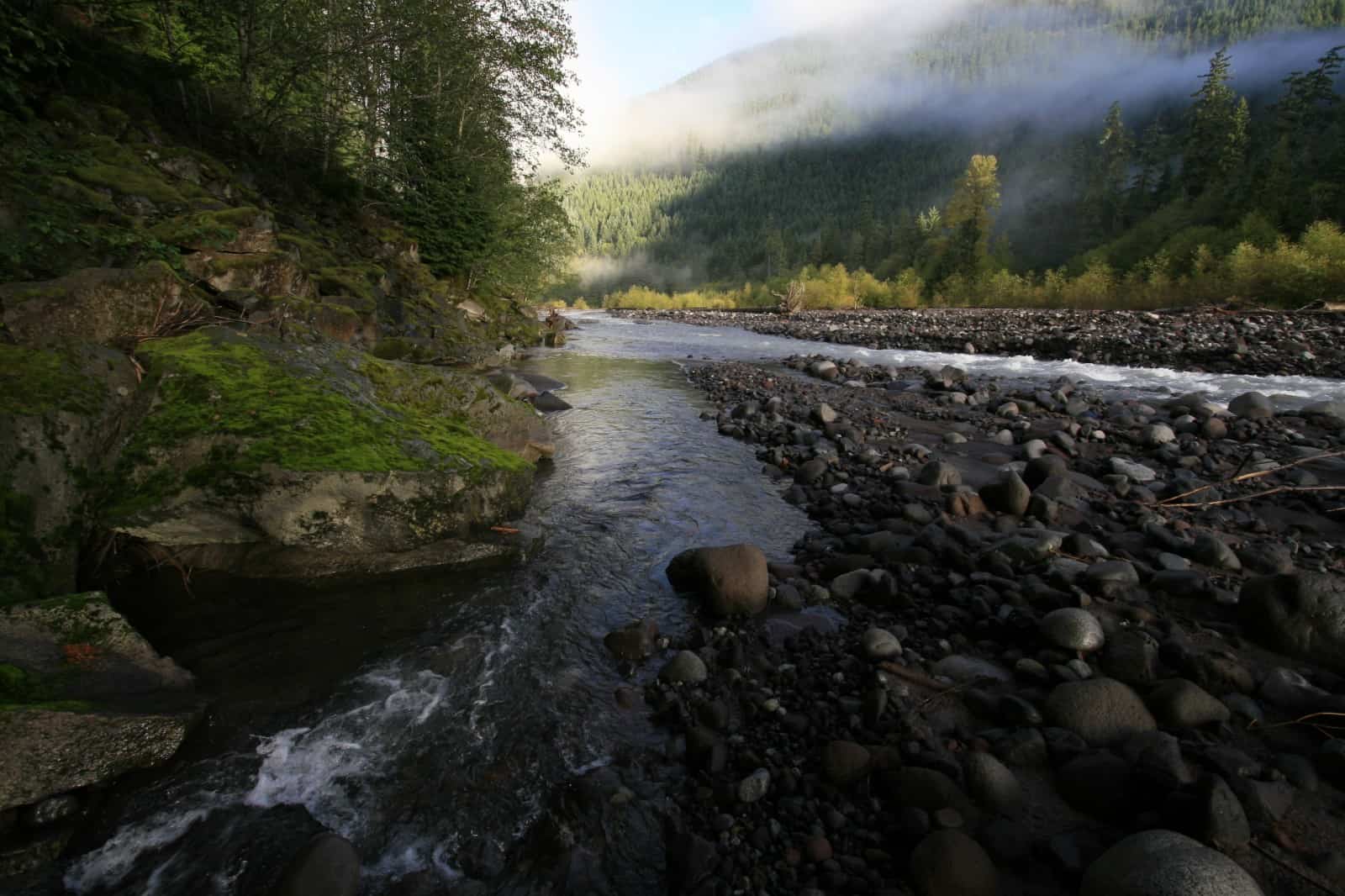 LOCATION: NW corner of the park

Long prone to major flood damage, the road has been closed since 2006 after sustaining several major washouts. Park officials this year have announced that the Carbon River Road will not reopen-instead it will be converted to a trail. This closes a long chapter of roads and road building in the west side of the park. Efforts were first begun in the 1920s to connect a road from the Nisqually Entrance to the Carbon River Entrance.

By 1932 over 15 miles of the Westside Road had been constructed and opened to cars from the Nisqually Entrance to the North Puyallup River. The Carbon River Road was extended five miles up the valley to Ipsut Creek where a ranger guard station and campground were built. By the late 1930s however, with growing doubts that the road could be constructed up rugged Ipsut Pass, and a concern that the road would open pristine wilderness areas to development, park officials decided to suspend the project.

A road however was constructed in the 1950s to Mowich Lake, just south of the Carbon River Entrance. Here a walk-in campground and ranger station were built along the shores of the park’s largest and deepest lake. This road also opened access to some of the park’s most stunning hiking trails, including one leading to the restored fire lookout tower on Tolmie Peak; and one to the wildflower bursting meadows of Spray Park. At an elevation of 4,900 feet however, Mowich Lake and the road leading to it are usually closed from November to early July. The closed road does however offer excellent cross-country skiing and snowshoeing throughout the winter.

The Ipsut Creek Car Campground is still open, but now accessible to just hikers and bikers. If you plan on spending a night at this delightful campground on the Carbon River, pick up a backcountry permit at the Carbon River Wilderness Information Center near the Ranger Station. From Ipsut Creek you can hike 3.2 miles on the Wonderland Trail to a suspension bridge over the Carbon River at the snout of the Carbon Glacier. At an elevation of 3,500 feet, Carbon is the lowest elevation glacier in the Lower Forty-eight and at over five miles long-the longest glacier within the contiguous states as well.

Much of the Carbon Valley was bustling with coal mines and mining towns around the time the national park was established in 1899 and well into the 20th century. To gain a better appreciation of this era, be sure to check out the town of Wilkeson on your way to or from the Carbon River Ranger Station. One of only a couple remaining towns in the valley, Wilkeson has scores of historic homes and sites. Check out the town hall, Russian Holy Trinity Orthodox Church, and Wilkeson Elementary School; all listed on the National Historic Registry. Many of the buildings in town were constructed of Wilkeson sandstone, which was also used for the state capitol in Olympia.

The Quarry is still there as well as some of the old coke ovens that operated in town until the 1970s. Today a quiet town of 400 residents, Wilkeson at one time had over 2,000 inhabitants and was once known as the roughest mining town west of Butte, Montana. It’s quite a friendly place now and a great place for hike too, with the Foothills Trail running through town. You can follow this old railroad line north 2.5 miles to a restored trestle or south 3.0 miles to Carbonado, another old coal mining town.

Pierce County Parks plans to eventually connect these sections of trail with existing sections farther north and west for a continuous trail of over 25 miles all the way to Puyallup. And the Carbon River area of Mount Rainier National Park will also be seeing some changes. In 2004, Congress approved an expansion of the park by 800 acres here. Land is currently being acquired and park officials hope to construct new trails and a campground here in the future.