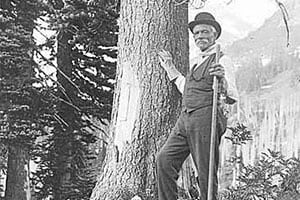 Famous for:  In 1870, Van Trump along with Stevens becomes the first successful documented climbing party to summit Mount Rainier.

Also notable for: His friendship with John Muir and early involvement with the Sierra Club.

Born in Lancaster, Ohio in 1838, Philemon Beecher Van Trump, also known as P.B. Van Trump moved to Washington Territory in 1867. He accepted a job as a private secretary to Marshall F. Moore, the seventh governor of Washington Territory and Van Trump’s brother-in-law. It was the summer of that year Van Trump first saw Mount Rainier and began his obsession with climbing it. Van Trump wrote (documented in Aubrey L. Haines’ Mountain fever: historic conquests of Rainier- Oregon Historical Society 1962):

On the descent the next day, Van Trump slipped and fell on a snowfield sustaining some injuries.

That first true vision of the mountain, revealing so much of its glorious beauty and grandeur, its mighty and sublime form filling up nearly all of the field of direct vision, swelling up from the plain and out of the green forest till its lofty triple summit towered immeasurably above the picturesque foothills, the westering sun flooding with golden light and softening tints its lofty summit, rugged sides and far-sweeping flanks — all this impressed me so indescribably, enthused me so thoroughly, that I then and there vowed, almost with fervency, that I would someday stand upon its glorious summit if that feat were possible to human effort and endurance.

On August 17, 1870, Van Trump along with Hazard Stevens proved that feat was indeed possible as they became the first documented people to ascend and stand on Mount Rainier’s 14,411-foot summit. It was an arduous adventure that forced the two (ill-prepared for the cold) to spend the night on the mountain in the summit crater hunkered down in a cavern warmed by sulfur steam. On the descent the next day, Van Trump slipped and fell on a snowfield sustaining some injuries.

While Van Trump’s 1870 ascent of Mount Rainier had its challenges, it evidently didn’t dissuade him from return visits. He made four more documented trips to the summit including one in 1888 in which he guided conservationist and Sierra Club founder John Muir to Rainier’s summit. Van Trump and Muir kept in touch afterward and had an influence on each other. In 1891 Van Trump advocated for national park status for Mount Rainier and worked with Muir to expand forest preserves (precursors to national forests). In 1893 he joined the Sierra Club and served on the club committee to create a Mount Rainier National Park. The park came to fruition in 1899.

Van Trump kept a strong attachment to the mountain and the new park. He worked for some time greeting tourists at a tent camp in Indian Henry’s Hunting Ground to working as a seasonal ranger. Failing health led him to return east to be with his relatives. He passed away in 1916 at the age of 77. Van Trump Park, Van Trump Creek, and Van Trump Glacier on Mount Rainier are all named after him.