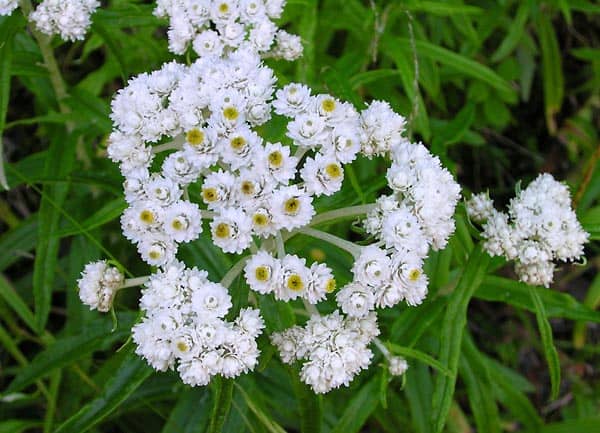 Anapahlis margaritacea, commonly known as the western pearly everlasting, is a flowering perennial plant in the Asteraceae family. Since it is the only North American species it is often simply called pearly everlasting in the United States and Canada. However, it is also native to Asia and has been widely introduced in Europe. It grows erect up to heights of about 1.2 meters and has narrow, alternate leaves. One salient feature is that the undersides of the leaves are covered in tiny hairs, giving them a wooly feel and appearance. The stems are dry and brittle. The flower is small and whitish to yellowish and grows in a corymb inflorescence. The more conspicuous part of the inflorescence is the numerous white bracts that surround the actual flowers. The plant is dioecious. It prefers dry, sunny climates, although it is hardy to temperatures well below freezing; it is common throughout North America excepting states that border the Gulf of Mexico. The leaves and young plants are edible when cooked.