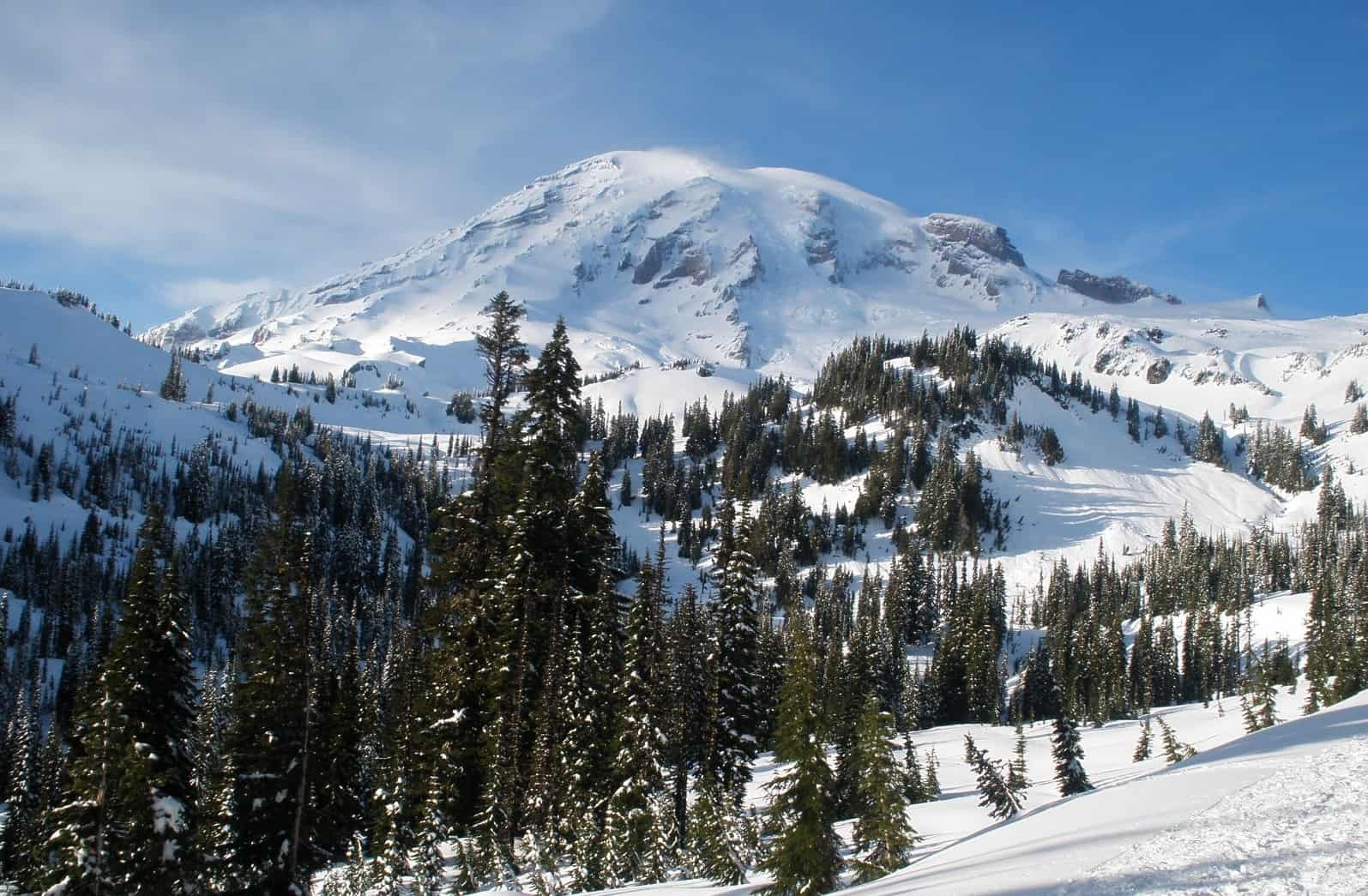 Summer road is skier’s delight for half the year

For cross country skiers who prefer a well-graded trail through spectacular open alpine country, the Paradise Valley Road in Mount Rainier National Park can’t be beat. And with Paradise’s epic snowfall, averaging nearly 700 inches a year, cross country skiers can count on a season from November to May.

From a starting elevation of 5,400 feet at the large parking lot in Paradise, set out northeast on the closed-in-winter buried-in-heap loads of snow Paradise Valley Road. More than likely the road will be tracked-thanks to the hundreds of other enthusiastic skiers that beat you to the road after new fallen snow. And hopefully too the area’s legions of snowshoers will respect the ski tracks by following alongside forming a parallel snowshoe track. Most of the snowshoers will immediately depart the road on their way to the Reflection Lakes. And any remaining snowshoers on the road will more than likely depart at the road’s bend to head up to Mazama Ridge.

You get to enjoy a nice downhill ski run with breathtaking views of the Paradise Valley-now shrouded in white sprawled out below you. The Paradise River’s snaking tributaries will more than likely be buried too, but deep indentations in the massive snowpack are usually present reminding you that the frozen meadow below is quite a lush locale in summer. Angling high above the meadows and traversing steep slopes below “the Mountain,” the road gradually descends. After .3 mile or so it makes a sharp bend south to start traversing the steep and open slopes of Mazama Ridge.

There are a couple of sections here prone to avalanching; so it is absolutely imperative that you check on snow conditions with park rangers before skiing this route. In stable snow conditions, the way is fine. Otherwise, it is extremely dangerous. If the avalanche warning is moderate to high, you’ll need to either continue by skiing up Mazama Ridge, a route recommended for experienced skiers only-or you’ll need to bypass the slopes by skiing lower into the valley.

The valley route while at first glance appears to be easy, can actually be a little tricky. There are several areas where you’ll need to either cross over the Paradise River or one of its tributaries. If the waterways have cut deep ravines in the snowpack, this will be near impossible to do (and potentially dangerous). Look for snow bridges and try to stay as close to Mazama Ridge without being in the avalanche zones to safely make your bypass route.

If the snowpack is stable, continue straight on a nice downhill run slowly closing in towards the valley floor; although your way never settles in upon it. Of course, by being above the numerous clusters of old-growth firs and hemlocks dotting the valley floor, you’re granted almost continuous views. Keep looking back to watch for Mount Rainier’s snowy massive presence come into view rising above the ridges and steep slopes cradling the Paradise Valley.

Look west too, out over the Paradise River Valley as it yields to the Nisqually River Valley. Locate High Rock in the Sawtooth Ridge, and waves upon waves of blue-green ridges behind it fading into the western horizon. The views south of the serrated Tatoosh Ridge were excellent from where you first began, but now a low lying forested ridge blocks them from view.

Here in these forested glades watch for some of Rainier’s all-year residents. Foxes are frequently spotted within the old growth columns. And whisky jacks (Gray Jays, Canada Jays, Campground Robbers-whichever name your prefer to refer to them as) will most certainly try to abscond with your granola when you pause for a break. It’s not unusual for these gregarious birds to set perch on your head if you remain still enough and food is nearby.

After a wonderful two-mile run you’ll come to a junction with the Lakes Trail which is clearly defined by wands and snowshoe imprints. Following this way north back to the parking lot is possible, but difficult due to a steep climb and densely forested route.

You can continue south on that route for .7 mile to the Reflection Lakes by skiing over a low lying ridge, but that too will require some tight maneuvering through the forest. It is also possible to continue on the Paradise Road to the snow-covered Stevens Canyon Road to the Lakes, but this route is not recommended because a dangerous avalanche slope must be crossed. What to do then? Either enjoy some free-for-all skiing in the Paradise Valley picking your own route across open meadows-or retrace your way back to the parking lot via the way you came-the road.

While you will need to regain the 500 feet of elevation that you lost, the climb is gradual and your eyes will be fixated on Mount Rainier for most of the way. Once back at the parking lot, greet scads of snowshoers, sledders, climbers, and telemark skiers-all of them more than likely content after spending a great day in a wonderful winter paradise.

Visitors are encouraged to consider carrying an avalanche beacon and ask park rangers about any avalanche concerns.

ROUTE MAPS INSIDE THE PARK:

Q: Can I go cross-country skiing at “barn-flats”?

A: Yes, the “barn-flats” is also known as the lower picnic area at Paradise. It’s fairly flat, it’s unmarked and when covered in snow is suitable for cross-country skiing.