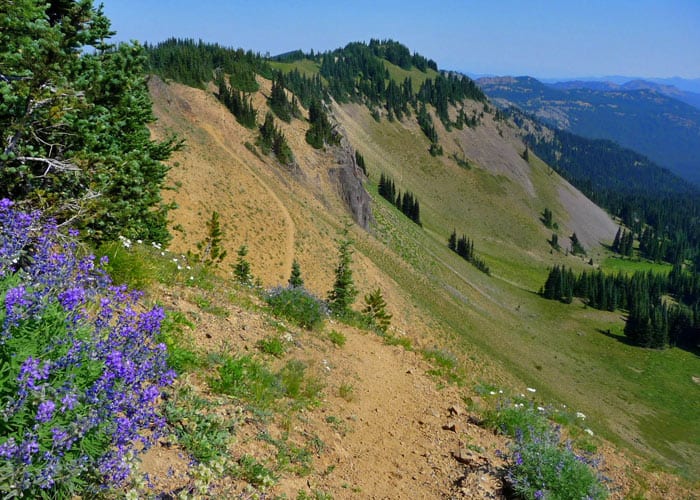 One of the most idyllic hikes anywhere is to the top of Norse Peak, offering lovely alpine meadows, lakes, and scenic beauty all within a virtual stone’s thrown of civilization, namely Crystal Mountain Ski Area. While you can see the ski slopes from some vantage points along the way, there are other places where you are alone with nature and the aesthetic charm of the surrounding vistas. You could easily imagine you’re hundreds of miles from any evidence of humanity.

On this particular day, we couldn’t tell it was September on Norse Peak. The meadows were still green and higher trails bordered with wildflowers. Only hellebore at higher elevations was tinged with autumn gold and we even found columbine blooming along shady stretches of the trail. Another plus – biting insects are dying off and shouldn’t be much of a problem for the rest of the season. Even with a light dusting of snow, this is a trail you can often enjoy through mid to late October.

Overall the Norse Peak trail is in great condition. Finding the trailhead however, is a bit tricky. As of September 2011, there is no sign for the trailhead plus the road number for Forest Service Road No. 410 (where the hike begins) is hidden by vegetation. Keep in mind, this also means this trail is less well known than many others and on busy summer weekends in the national park, few people come to this area to hike even though the meadows are as lovely and the views of Mt. Rainier as stunning.

Per the map (Green Trails No. No. 271 – Bumping Lake, WA) we initially parked at the junction of Forest Service Road No. 410 and Crystal Mountain Road but noted there was little room to turn around. Better: park beside Crystal Mountain Road (that is probably what the forest service would prefer). Road No. 410 is where the hike begins. Look carefully; there is a sign for the road number but it is obscured by vegetation. After figuring out where to park, we walked up Forest Service Road 410 and through an open gate – shortly beyond is a brown, blank signboard (left). Though not designated as such, this is the trail – turn uphill onto the well-traveled path.

The morning was already unseasonably warm and we were grateful for shade and a cool breeze along the trail. As we continued we enjoyed sneak previews of Mount Rainier through the trees and views of Crystal Mountain and the Crystal Mountain Ski Resort. We passed a few sections of old trail that were signed “closed for restoration”. At about two miles (5,890 feet) we reached the trail junction for Goat Lake (left; N 46° 58′ 01″, W 121° 28′ 00″) indicated by a large, hand-painted sign (the only sign we saw the rest of the hike).

Forest, small meadows and switchbacks with views held our interest and as we gained elevation meadows began to predominate on ever-steeper terrain. Some meadows were fresh and green, others tinged with copper and gold, indicating autumn’s approach though many wildflowers still bloomed, seemingly oblivious to the changing season.

As the terrain opened up we could see a pyramid-shaped high point coming into view that I recognized from previous hikes. Soon the trail broke out into the open along the crest of a ridge and from that point it was mostly a walk in the sky as the trail followed the ups and downs of the topography. Did I mention the views? This is high country at its best. With ups and downs we reached an obvious trail junction at a saddle though it was not signed as such. At this saddle the Norse Peak trail (No. 1191) drops steeply down to Big Crow Basin (left; N 46° 57′ 37″, W 121° 27′ 31″) and the trail to Norse Peak becomes the Norse Peak View Trail No. 1911.1 and continues following the ridge-crest. The views from this saddle are spectacular but if you want to get to Norse Peak you’ll have to hike a little further. We guarantee the views are such you won’t mind.

The views improve every step of the way and there is much to see: a cluster of white snags straddle the ridge that seem to reach imploringly to the sky and clumps of late-summer flowers clinging to crevices in the rocks.

We passed by other closed-off sections of the old trail – and then coming into view directly ahead was the summit of Norse Peak. From the distance it’s not as imposing a summit as other high points along the crest, but the views keep growing. A little further along, the trail wraps around the end of the ridge where there is a view of Basin Lake (5,800 feet) before the trail climbs through a short forested section to the summit at 6,848 feet.

At the summit is a circular rock ring, just about the right size to pitch a tent. While there are no longer traces of the lookout there are good views of Mount Rainier on a clear day. Haze from forest fires made it difficult to take a good photograph of Mount Rainier on that day, so we focused on wildflowers and views closer at hand.

There were no biting insects to contend with so we languished on the summit, trying to identify the yellow flowers that were blooming there. The air was a sweet mix of pine, meadows and the scent of musk – elk were nearby though we did not see any.

On our way back we dawdled, stopping for more views of Basin Lake and from the ridge-crest a panorama of meadows with the colorful swirl of peaks, ridges and valleys in the distance. We met only two hikers the entire day, rather surprising given the generous views this trail affords.

We made good time retracing our steps though admittedly the last stretch of the trail back to the car was dusty and felt interminable. As much as we hated to leave, we were looking forward to the cooler with cold water in the car and a package of chocolate candy that wouldn’t melt before we could eat it.

To get there from Enumclaw: drive east on State Highway 410 about 33 miles to Crystal Mountain Road and turn left. Continue about three miles to Forest Service Road No. 410 and park on the east (right) side of Crystal Mountain Road. The trail (No. 1191) starts on the west side. The trailhead (left) is about 500 feet up the forest service road.