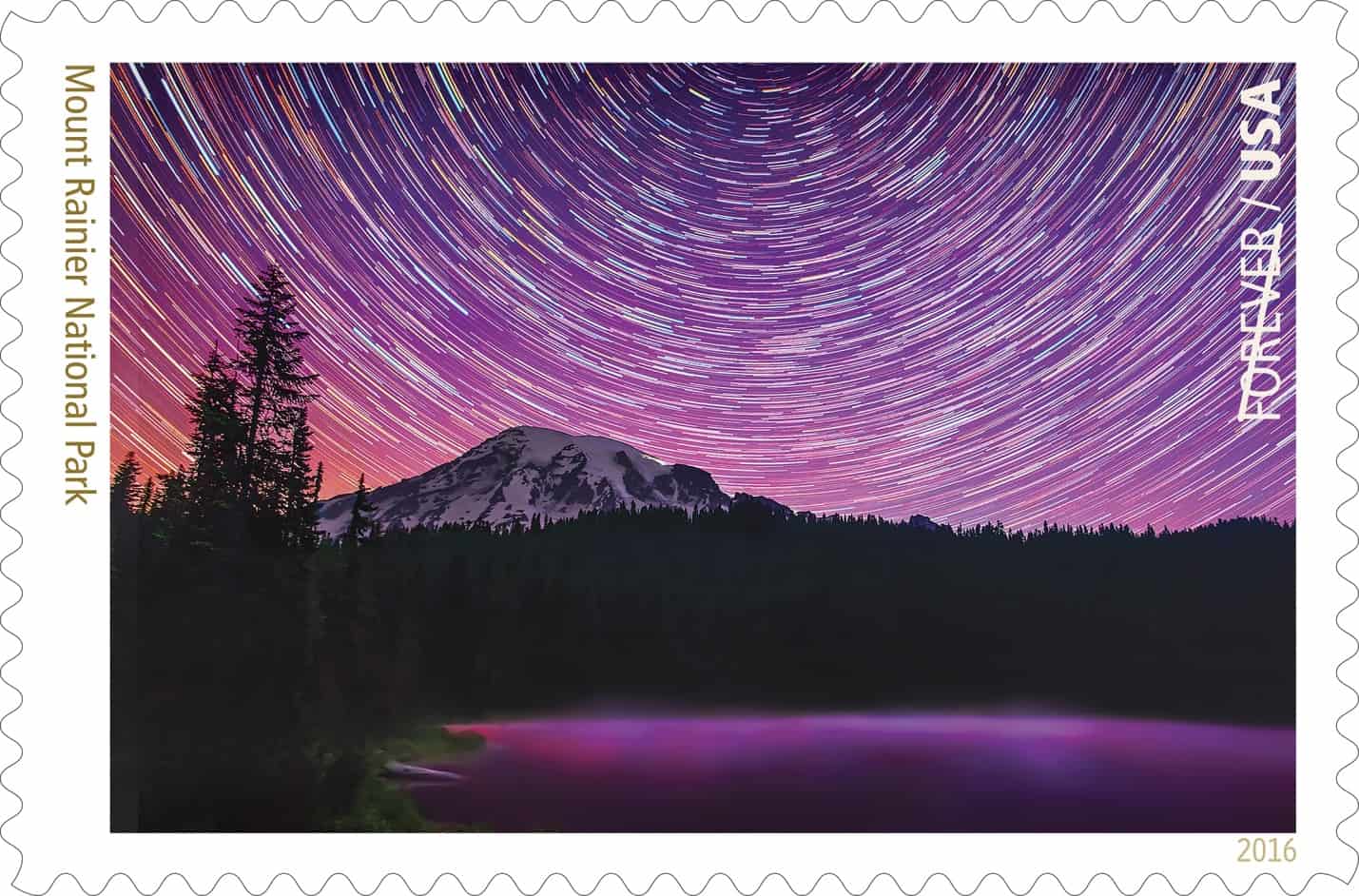 WASHINGTON – A stunning star trail photograph comprised from 200 images was previewed today to celebrate Washington’s Mount Rainier as the 13th of 16 National Parks Forever Stamp series to be revealed over a three-week period to celebrate the National Park Service’s 100th anniversary.

Ascending to 14,410 feet above sea level, Mount Rainier stands as an icon in the Washington landscape. An active volcano, Mount Rainier is the most glaciated peak in the contiguous United States, spawning six major rivers. Subalpine wildflower meadows ring the icy volcano while ancient forests cloak Mount Rainier’s lower slopes. Wildlife abounds in the park’s ecosystems. A lifetime of discovery awaits. Visit this link for more information about the park.

The stamp image is the creation of Matt Dietrick of Pittsburgh, PA. “This night was one I will never forget,” said Dieterich, who worked at Mount Rainier as an intern with the National Park Service Geoscientist-in-the-Parks to educate the public on dramatic views of the stars and the effect of light pollution near highly populated areas. “After working with visitors at the Mount Rainier astronomy program on June 22, 2015, I noticed there was an aurora, so I drove down to Reflection Lake to capture it.”

“The location was perfect as it contained a view of Mount Rainier and water for reflections,” he continued. “To create this star trails image I took 200 photos in a two-hour window between 2 a.m. and 4 a.m. with my Nikon D750 and 24mm lens set at F/1.4 and ISO 5000. Since the Earth is rotating, each 8-sec. exposure shows stars at slightly different locations. When the photos are combined into one image the stars create a circular pattern around the North Star, which is just out of view at the top of the image. The pink aurora spread throughout the background sky. Mountaineers can be seen with their white headlamps climbing Mount Rainier on the right side of the volcano.”

“To capture star trails photos just like this,” he added, “all you need is a digital single lens reflex camera, a wide angle lens, tripod and shutter release cable. So what are you waiting for? Grab your gear and get out under the stars!”

“We are honored that such a striking view of Mount Rainier night sky was included in the National Parks Forever Stamp series,” said Randy King, Superintendent of Mount Rainier National Park. “We are working with the United States Postal Service to plan a first-day-of-issue event at the park on June 2.”

The June 2 first-day-of-issue ceremony for the National Parks Forever Stamps pane will take place at New York City’s Javits Center at 11 a.m. as part of World Stamp Show-NY 2016. Dedication ceremonies will also take place at or near each of the National Parks depicted on the stamps. Individuals are asked to spread the news on social media by using the hashtags #NPSStamps, #FindYourPark or #NPS100.

World Stamp Show-NY 2016 will take place May 28–June 4. Held only once a decade, this mega event is not to be missed by beginners through advanced stamp collectors alike. There will be something for everyone there, no matter what you collect. Stamp collecting is a hobby for a lifetime. No matter what your specialty, you’ll find it at the show.

The Postal Service receives no tax dollars for operating expenses and relies on the sale of postage, products and services to fund its operations.