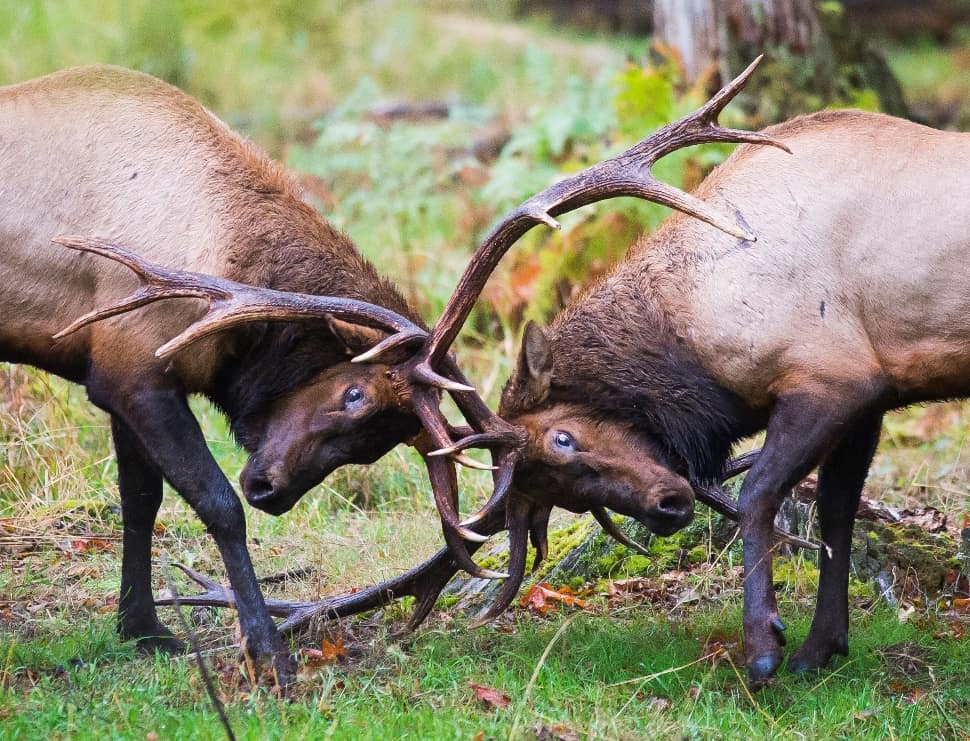 A NATURAL SHOW OF FORCE: ELK ARE SEEKING HERD DOMINANCE WITH BUGLING AND ANTLER CLASHING AT NORTHWEST TREK WILDLIFE PARK

Antlers are clashing and Roosevelt elk are emitting an otherworldly sound known as bugling at Northwest Trek Wildlife Park.

This is autumn among the animals, and it’s an exciting time to visit the wildlife park near Eatonville. The rut, or breeding season, is in full swing as males with impressive racks of antlers vie for dominance over the herd. It’s  the annual show of nature’s power among this native Northwest species.

Male elk battle for supremacy, running at one another, nostrils puffing air and snorting, and then clashing antlers with an impressive “cra-ack” as those hard surfaces slam together. During the “courtship” season, the bull elk employ a variety of sounds, behaviors, postures and social cues intended to subdue their rivals and woo the females. The rut goes on for a few weeks, and the victor in this “king of the herd” contest becomes the leader of the group, winning the opportunity to mate with the elk cows.

Now is a great time for visitors to Northwest to look for these displays of force while riding through the wildlife park’s 435-acre Free-Roaming Area aboard a comfortable, heated tram. The 50-minute tour is narrated by a naturalist as the tram winds through forested hills and meadows that are home to the Roosevelt elk herd, plus American bison, six moose, bighorn sheep, deer and other animals.

The Discovery Tram Tour is free with every admission to Northwest Trek. Visitors also can wander forested pathways to view black bears, wolves, foxes, Canada lynx, bobcats, beavers, fishers, river otters and other animals in natural habitats. And kids from toddlers to tweens can slide, climb, explore and use their imaginations in the Kids’ Trek nature-inspired playground.

Ticket windows at Northwest Trek are open from 9:30 AM to 3:00 PM Fridays, Saturdays, and Sundays. The last tram leaves the station at 3:00 PM and visitors have until 4:30 PM for last-minute animal watching and Kids’ Trek play before the gates close for the day.

For more information, go to www.nwtrek.org.