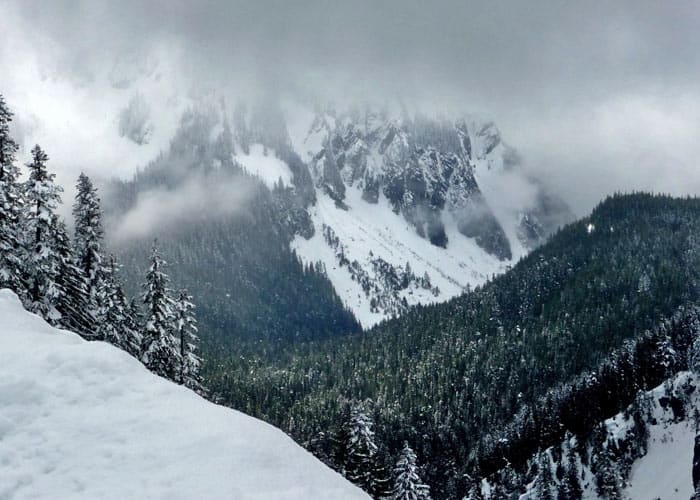 Paradise seems to be everybody’s favorite, but for those who prefer more solitude, the snowshoe from Narada Falls to Reflection Lake is a little more lonesome. With lingering snow and cool temperatures Narada Falls is best left to ice-climbers; the waterfall will be at its most spectacular later this season and safe to get to.

One plus of starting from the Narada Falls trailhead (4,503 feet) is the heated comfort station; ideal this time of year and comfy for changing clothes. In early, May icicles festooned the doorway – at this time there’s still 4 – 5 feet of snow on the ground at the trailhead.

You might luck out as we did and encounter the fox that lives nearby. After admiring a stellar jay with fluffed out feathers (he looked like a grumpy old mountaineer in a puffy, blue down jacket) we started out on the designated trail (a safe route marked by poles). Barely had we turned a corner when we saw the fox. We expect wildlife to run from us but not this fox. He (or she?) kept a respectful distance from us but seemed used to humans – he sat down, looked at us, and then loped closer.

We spent a few moments gazing at each other before he trotted into the trees. Red foxes (Latin Vulpes vulpes) are usually red but not always – this fox was black with silver trim. Foxes weigh only 10-15 pounds and are smaller than you’d expect; their plume-like tails make them look longer. Except for females with young, foxes generally sleep outside in a warm spot or south-facing slope and curl up like a domestic pet. It is believed that foxes mate for life. Foxes do most of their hunting between dusk and dawn. Their main diet consists of mice and moles; they also eat other fruit, frogs, carrion and rabbits.

Seeing the fox made a fine start to the outing though that’s more than we could say for the weather. Forecasts of partial sun didn’t materialize; it snowed part of the day and Mount Rainier stayed behind the clouds.

Before we started on the trail we looked up to the avalanche slope below the Stevens Canyon Road where the road makes a big switchback. While it might be tempting to take the shortcut and head straight up the slope, we recommend you don’t. Stay on the designated trail to be safe.

With so much snow on the ground it’s hard to get a feel for how long a trail is – it’s only about .06 mile to the Stevens Canyon Road (Junction: N 46° 46′ 40, W 121° 44′ 22) on the snowshoe route though it felt like more. The markers are handy if you’re the first one on the route as the summer trail is buried. Snowshoe and ski tracks indicated others had started out ahead of us; we appreciated not having to set new tracks.

As we continued through a setting of snowy slopes broken by the graceful shapes of evergreens and occasional grizzled snags, we admired the sinuous curve of the barely discernible Paradise River, bounded by creamy snowbanks. As the route veered away from the river it became steeper; the snow was perfect for snowshoeing.

Then without warning the tracks abruptly ended at the edge of a snowbank and we were looking down on the Stevens Canyon Road (4,828 feet). It took a moment to orient ourselves but a look at the map verified the Nisqually-Paradise road was to our left; we turned right to continue to Reflection Lakes (Reflection Lakes can also be reached from Paradise; some snowshoers/skiers make a loop).

We especially enjoyed the stretch near Inspiration Point (4,854 feet; N 46° 46′ 24, W 121° 44′ 39) where we could look down the Nisqually Valley though clouds obscured the peaks above. When we saw the snowplows we made sure the operators saw us before we passed them by waving our arms and ice axes. They grinned, gave us a thumbs-up, and stopped work so we could pass them safely. Past the snowplows, the snow was once again deep and the silence almost palpable.

Old tracks indicated others had gone ahead of us but we had the place to ourselves. The route to the lakes was gentle, a glittering work of art. Who knew there were so many shades of white? Graceful subalpine evergreens interrupted the unbroken snow as the ever-present gray jays hopped toward us, hoping for a handout. With light snow still falling and a breeze we lingered only long enough to grab a bite to eat.

We stopped at the first lake (4,863 feet) though lakes don’t look like lakes this time of year; to the unpracticed eye they appear as flat extensions of the endless white that covers the landscape. If you’ve never seen a lake start to thaw, come back a little later; then the snowy lakes will be wearing a turquoise necklace along the shoreline where snow has melted at the edge.

Since we’d set tracks our return trip was much easier – it didn’t seem like any time at all before we were back at Inspiration Point looking down the valley. This time we were rewarded with partial views of Eagle Peak.