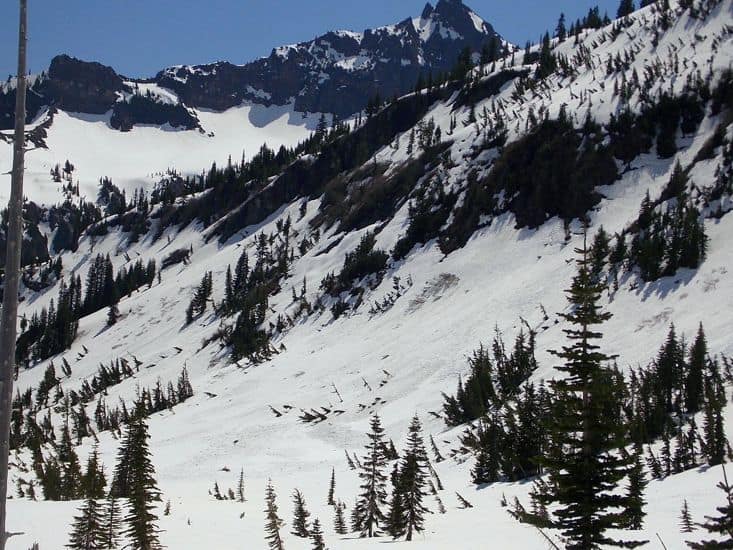 May can be a tricky month in the mountains for hikers – you’re never quite sure how to dress or what gear to take to get around comfortably and safely on higher elevation trails. On our recent visit to Mount Rainier National Park we were over-prepared – still, that’s better than being under-prepared as spring is capricious and snow can vary from ice to slush. We also know from experience how a strong desire to reach a particular destination can overrule common sense. It’s all too easy to push the envelope – especially these first warm, sunny days that sometimes lure hikers into danger. Be wary of short-cuts; they don’t always work out – like on our recent trip to Bench and Snow Lake starting from Narada Falls via the Stevens Canyon Road.

In mid-May the snowmelt was full-on with feisty streams racing down road banks and small, seasonal waterfalls bursting from gritty piles of plowed snow beside the road. At the Narada Falls trailhead the waterfall was roaring from snowmelt though there was still plenty of snow on the ground. We dithered – should we head straight up to the Stevens Canyon Road on the steep snow behind the Narada Falls Comfort Station or take the longer, safer route and hike the Stevens Canyon Road?

Equipped with snowshoes, traction devices, ice axes and trekking poles we opted for the steep snowy short-cut to the Stevens Canyon Road. Tracks beckoned where others had gone before that appeared to avoid the open, avalanche-prone slope between Narada Falls and the road. It would cut off a lot of mileage; how hard could it be? All too soon the tracks merged with sun cups (sun cups are indentations formed by changing temperatures that resembles tracks) and though we could see the road above, we lost the tracks in the icy, pine-needle-covered snow and needed to kick steps. Wanting to avoid the open slope we put on traction devices and zigzagged through the trees glad for ice axes and trekking poles, a necessity, not a choice.

We removed traction devices once we reached the Stevens Canyon Road to find the road had been recently plowed and was snow-free. After our mini-epic on the steep snow we were happy to walk the road. We continued on the road as it skirted Reflection Lakes (left) which were just beginning to thaw and the Lake Louise overlook (Lake Louise is also beginning to thaw). In another 1-1/2 miles or so of pleasant road-walking, we reached the Bench/Snow Lake trailhead on the south side of the road (right) where the trailhead sign has emerged from the snow.

At that point we put on traction devices again as the trail was 100% snow-covered though the terrain open enough that if you’ve hiked the trail in summer the route is easy to eyeball as the trail follows an obvious, broad bench that leads to an overlook above Bench Lake (some hikers refer to this overlook as “The Bench”). However, Bench and Snow Lakes are at about the same level as the trailhead – expect some ups and downs. Bench Lake sits at the edge of a cliff – Snow Lake lies in a cirque but is slow to melt out and prone to avalanches from cliffs above.

The snow was deep and the traction devices came in handy in shady spots (snowshoes would have also worked). Other than a couple of fading snowshoe tracks and an old ski track we mostly relied on our memory of having hiked the trail over the years. I recognized the silver snags near Bench Lake from previous hikes, the snags mute evidence of forest fires in the 19th century. In about mile from the trailhead we reached “The Bench” above Bench Lake (still under snow) with knock-out views of Unicorn Peak (the highest peak of the Tatoosh Range) and the less formidable Stevens Peak. We couldn’t help but wonder if we were the first to visit The Bench this spring.

Though we wanted to continue to Snow Lake we could see where recent avalanches had come down between the lakes, and given the warm sun we didn’t want to set ourselves up for getting caught by an avalanche (even small avalanches can be powerful). Instead we settled down for lunch at The Bench and had the views for dessert. After lunch we made short work of getting back down to the road where we took off our crampons and faced a long road-walk back to the Narada Falls trailhead. We took time to enjoy views of Mount Rainier with a cloud-cap that lingered all day, views of the Tatoosh Peaks, the thawing lakes and sparkling snow.

Hiking the Stevens Canyon road to the Narada Falls trailhead made for a longer but safer trip. Though it added mileage, it was interesting to walk the road to witness the transition from winter to spring and views of the Paradise River that we’d missed by taking the “short-cut.”

Back at the Narada Falls trailhead we lingered as a rainbow appeared, dissolved and reappeared again in psychedelic hues. We also stopped at Longmire to photograph the marshy meadows and openings in the alder groves where skunk cabbages were glowing in magical profusion.

Note: Unless you are an experienced hiker with cross-country route-finding skills and equipped with the right gear for changing snow conditions you might want to wait until June when more snow has melted. Then from Narada Falls you can hike the Paradise River Trail up to the Stevens Canyon Road and continue to the Bench/Snow Lake trailhead.

A large avalanche chute crosses the Snow Lake Trail. Visitors are encouraged to have experience navigating avalanche territory and carry appropriate safety gear when adding this trail to their itinerary during the winter season.