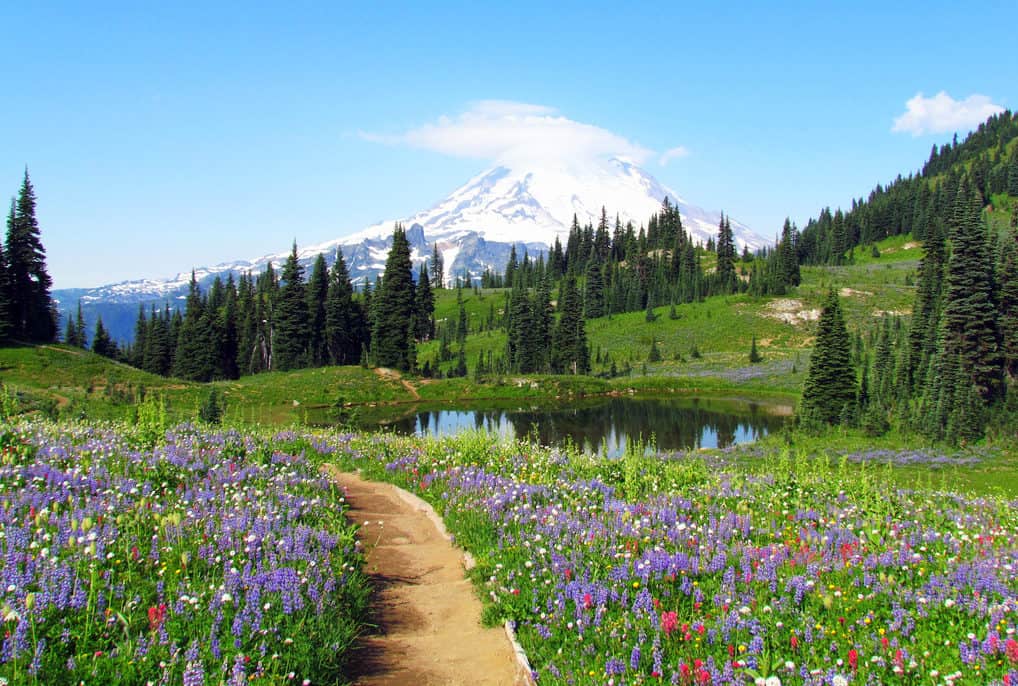 Here’s a hike that makes an easy loop encompassing Naches Peak, one of the mountain sentinels of Chinook Pass, while giving outstanding views of Mt. Rainier, providing colorful fields of flowers, and passing beside two fragile, glassy ponds.

To get there, drive east from Enumclaw on Highway 410 about 50 miles to Chinook Pass, elevation 5,400 ft. There is parking at the Tipsoo Lake picnic area and along the highway between that area and the summit of the pass. Other spots are available a short distance east of the summit with two good-sized parking areas on each side of the highway.

You can do the loop either clockwise or counterclockwise. Although common wisdom has hikers going clockwise, first on the Pacific Crest Trail, then later taking Naches Trail back after the Pacific Crest Trail veers off toward Dewey Lake. The argument is that Mt. Rainier views will be more prevalent. There are some who prefer taking the hike in the opposite direction, because the mountain is the mountain and you’ll still get good views, plus you’ll gain most of your elevation at the beginning of the hike.

So, let’s go counterclockwise. Pick up the Naches Trail near Upper Tipsoo Lake, which is about 1/2 mile south of the Pacific Crest Trail start, where you would cross the highway on a pedestrian bridge. Don’t fret; you’ll be able to cross that bridge when you come to it at the end.

The counterclockwise trail moves up rather abruptly and steadily through trees and shrubs, eventually breaking out past a small pond and into a succession of beautiful, rolling meadows, alive with colorful wildflowers and crimson huckleberry bushes. You’re about a mile into the hike at this point. You’ve got great views of Mount Adams and Goat Rocks to the south.

At about 2.2 miles, you’ll leave the Mount Rainier National Park boundary and enter the William O. Douglas Wilderness, attaining the top of a ridge southeast of 6,452-foot Naches Peak. You’ll pick up the Pacific Crest Trail here, heading back toward the highway and not down to Dewey Lake, although it might be tempting, given this scenic lake’s reputation for great camping.

So, head back via the loop, descending several gentle switchbacks to a rocky alpine basin. Watch for elk and marmots. At about 3.5 miles, you’ll pass by the second, little pond, and then move through clusters of outstanding, gorgeous wildflowers.

You’ll cross several creeks, which have waterfalls, although they may be dry by August. The way continues, re-enters the national park and traverses a steep side hill above a lush, green valley sprinkled with wildflowers. Soon, you’re back to the highway. Now, you can cross over the pedestrian bridge.

Wherever your car was parked, you can always come back to it. Or if you happened to park at Tipsoo Lake, you’re home free. That’s because you need to continue on the trail (once over the bridge) and descend to Tipsoo Lake, moving through the trees to a pristine lake with marvelous reflective views of Mt. Rainier, Yakima Peak, and the surrounding scenic beauty.

If you’ve taken lots of pictures, you can remember your trip for months or years. If you want to come back for a captivating experience, return in late August or early September for a moonlit stroll of the loop. You might hear the bugling of bull elk, if you listen closely. For this day, though, it was enough to absorb the wonder of nature’s beauty through a rather undemanding hike.

For lodging near the Chinook Pass area click here.

Q: Are dogs allowed on the Naches Peak Loop?