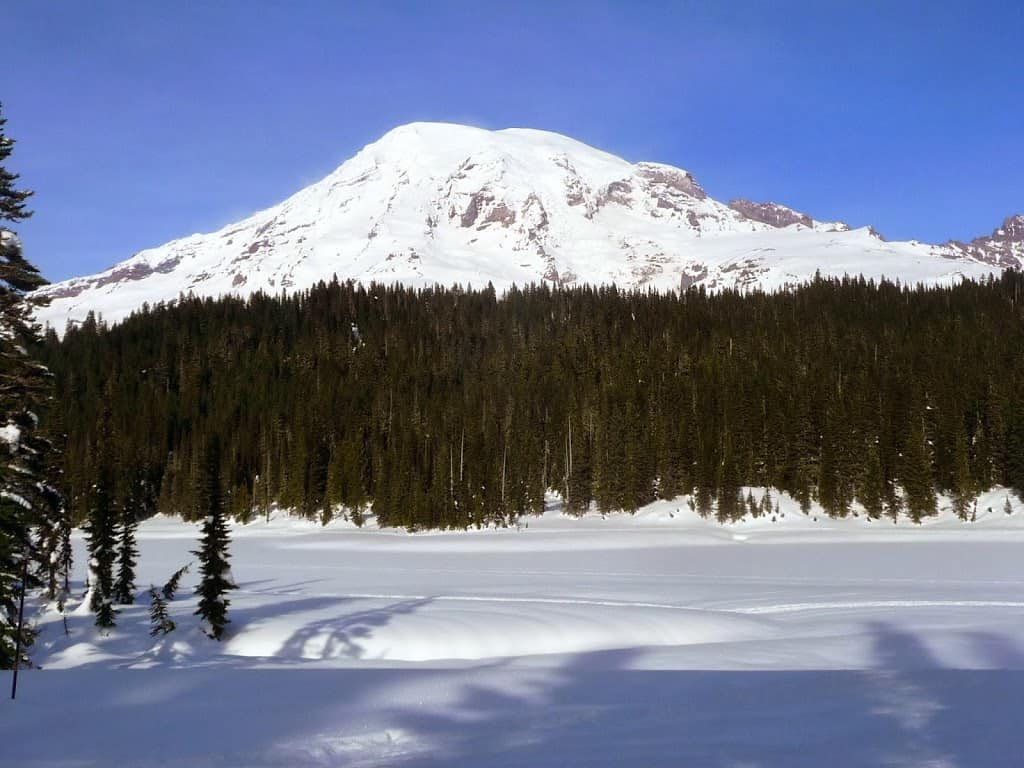 Skip to content
With a mountain in the background, rustic buildings and fairy-tale snow, nothing beats Paradise on a clear, winter day. However, Mount Rainier can also play hide and seek as lenticular clouds race along thermal freeways toward the peak, drawn to the mountain before they drift away, clearing the way for those views.
The drive to the Nisqually Entrance of the park is always enjoyable and often scenic – on our recent visit the sunrise tinted the sky in pastels, frost sparkled on the road like glitter flung from a New Years Eve bash though icy shadows interspersed with sudden beams of molten sunlight made the driving a bit challenging (don’t forget sunglasses!).

Given the sunny, dry conditions we hoped to get to Paradise without needing to chain up at Longmire and our wish was granted. The plan was to snowshoe to Bench and Snow Lakes via the Paradise Valley Road and the Stevens Canyon Road but like the best laid plans of mice and men we ran out of day before we ran out of enthusiasm.
We geared up and started down the Paradise Valley Road wondering what kind of snow we’d find. We started out in snowshoes but also carried traction devices. Poles will also come in handy though some prefer to snowshoe with an ice axe. The snow was well packed along the road though where it had melted, it had turned to ice. As the road gently descended we enjoyed views of the Paradise Valley and Mazama Ridge under cloudless,1 blue skies. Ski and snowshoe tracks criss-crossed the river valley, the tracks enhancing the beauty of the snowy hummocks, subalpine trees and shadowy indentations where tributaries lie under the snow.
The Paradise Valley Road is popular and used frequently by snowshoers and skiers coming and going from Edith Creek Basin and/or Mazama Ridge. It can be a challenge for those seeking solitude on a sunny weekend unless you travel cross-country. In about .4 miles the road makes a big bend as it contours Mazama Ridge and crosses the Paradise River on a stone bridge (the bridge was totally buried in snow). On the other side of the bridge you’ll often see ski and snowshoe tracks heading uphill toward higher points on Mazama Ridge. 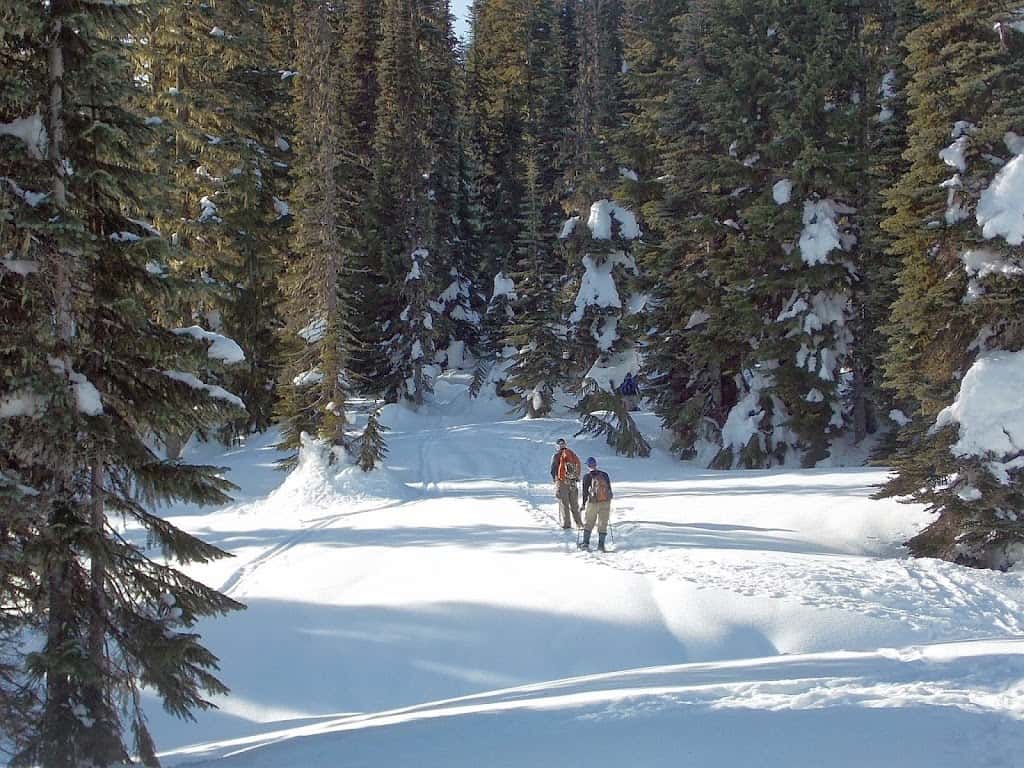 Continuing on the road you’ll reach a junction where a hard-to-miss orange sign advises users to take the Mazama Ridge bypass trail (via Mazama Ridge; N 46° 46′ 36″, W 121° 44′ 14″) rather than the road to Reflection Lakes. This bypass is steeper but safer. If you do opt for the road you’ll be snowshoeing below a potentially dangerous avalanche slope before you get to the lakes. The Mazama Ridge bypass is marked with poles, is easy to follow and with a few abrupt ups and downs to warm up your muscles. In the trees the snow was icy so I switched to crampons where it was steep and changed back into snowshoes when the trail leveled out followed by a level stretch leading to the Stevens Canyon Road where we turned (left) east.
As we approached the lakes we enjoyed views of the Tatoosh Peaks, especially Castle and Pinnacle Peaks. Pinnacle Peak looks impossible to climb though in summer it can be scrambled without technical gear for those with rock-scrambling skills. Castle Peak is considered more technical and suited to climbers. Nearby Plummer Peak is considered an easy walk-up in summer as is nearby Denman Peak. More intimidating is Lane Peak which falls somewhere in that gray area between rock scrambling and climbing, depending upon your level of expertise.
We also saw where skiers and snowshoers had crossed the lake rather than following the trail. We opted to stay on the trail and road as crossing frozen-over lakes can be hazardous. As we continued down the Stevens Canyon Road toward the Bench and Snow Lake trailhead we stopped to admire Faraway Rock rising above Lake Louise. From the road there is also a view of intimidating Unicorn Peak which is usually considered a climb. 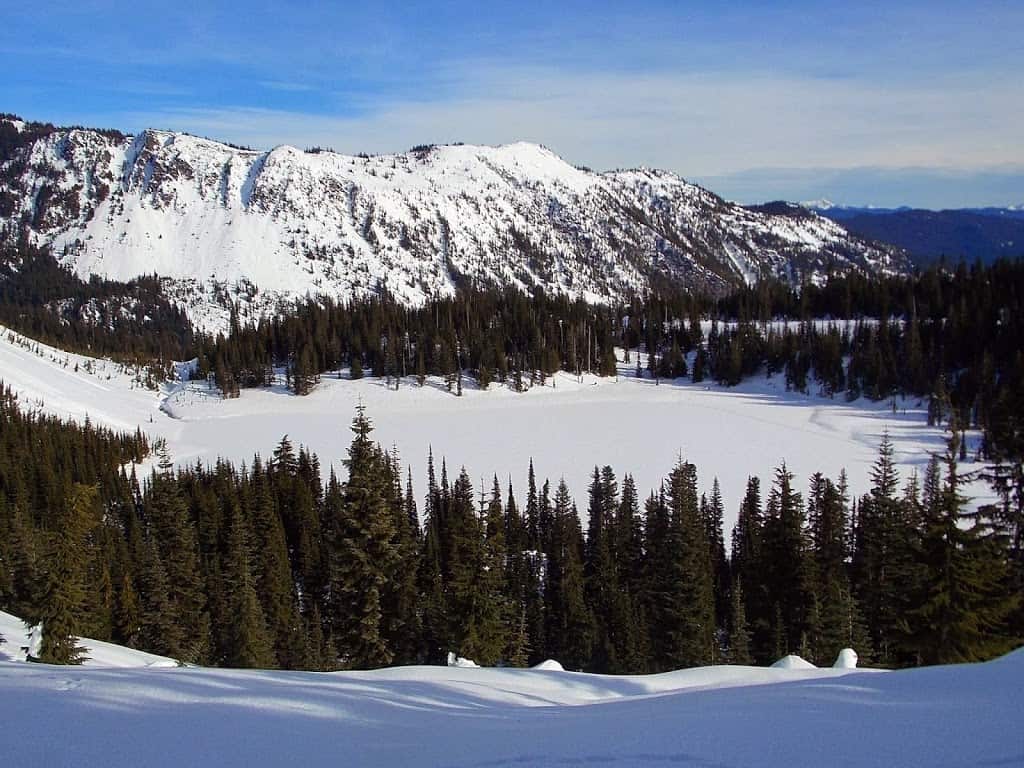 By the time we’d reached a viewpoint above Louise Lake (N 46° 46′ 11″, W 121° 43′ 2″) we knew there wasn’t enough time or daylight to snowshoe an additional four miles (round-trip) to Bench and Snow Lakes. As a consolation prize we concocted a loop by snowshoeing back to Reflection Lakes and retracing our route back to the Paradise Valley Road.
Rather than retrace our entire route back to Paradise we left the Paradise Valley Road and took the Narada Falls Trail (the junction is well-signed; N 46° 46′ 35″, W 121° 44′ 14″) in order to connect to the Paradise River Trail. This route was also wanded and easy to follow though it’s a steep pitch (600 feet of elevation gain in less than one mile) before the Paradise River trail ends at Paradise. We turned around several times to look back into the valley, still greedy for views of the Tatoosh Peaks and finding it hard to say farewell.
On our way back to Seattle we stopped at Alder Lake and Wildwood Park along Highway 161 to photograph the sunset and for a striking view of Mount Rainier in alpenglow.

For complete information on vacationing around Mt. Rainier, go to www.VisitRainier.com.
Visit Rainier is a not-for-profit, non-membership destination marketing organization that promotes tourism in the gateway communities around Mt. Rainier.