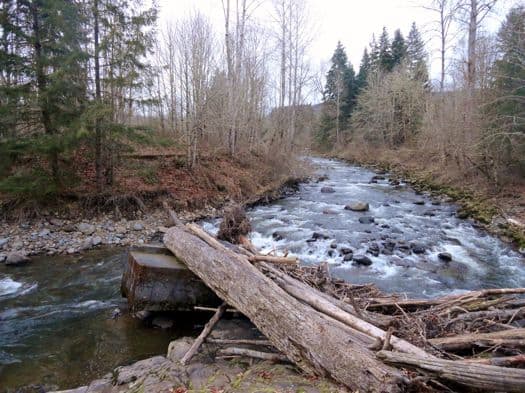 A short kid-friendly hike right in Eatonville. Explore two small parks rife in history and nature along the banks of the salmon-rearing Mashel River.

Before starting your walk at Millpond Park, check out the little log cabin to the west of the pathway. This structure was the first home in Eatonville, built by town founder Thomas Cobb Van Eaton who arrived from Minnesota in 1889. Van Eaton lived in the back of the home with his wife and three children, while the front of the structure was used as a trading post, stage stop, and post office. This is not the original location of the cabin, however. It was moved here in 1996 where it was restored and continues to be run as the Stage Stop Museum by the Eatonville Historical Society. It’s open for visitors from 1-4 on Sundays, Memorial Day through Labor Day. Feel free however to walk around it anytime.

Now head down the paved path passing a skateboard park, play structures, and picnic tables. Soon come to the edge of the quiet Millpond hosting a myriad of birdlife, amphibians, and small mammals. Try to imagine what this pond once looked like surrounded by a fury of human activity and commerce. In 1902 the railroad came to Eatonville spurring a wave of small sawmills in the area. But the big change to the community occurred in 1907 when the Eatonville Lumber Company transformed this small settlement into a company town. Beside from building a large mill and millpond here on the banks of the Mashel River, the company built a store and employee housing units.

Eatonville’s population quickly grew from 70 to over 700 from 1900 to 1910. Workers came from across the country and from other countries, particularly Italy and Japan. The mill thrived and by 1950, the town’s population was 1,050. But in 1954, the mill closed. The town’s population went into decline. The once bustling mill yard became dormant leaving behind a heap of rusted equipment and weathered buildings. The old wigwam mill burner, a familiar landmark and one of the last in the state, stood on these grounds until a wind storm toppled it in 2006.

Eatonville sprang back in time and realizing the potential of the millpond as a wildlife and recreation center, community leaders began to transform this blighted area into a lovely park. Now walk along the shoreline looking for birds and wildlife among the thickets. It’s not unusual to spot an otter in the millpond. And when clouds aren’t shrouding the countryside, catch glimpses of Mount Rainier hovering over the rolling hills to the east. At .2 mile the path reaches Mashell Ave.

Now turn left and cross the Mashel River (yes, it’s spelled differently than the road) soon coming to the entrance of Smallwood Park; named for a prominent and longtime Eatonville resident, George Howard Smallwood. A decorated World War II vet, Smallwood served on the Town Council and as mayor, as well as spending 31 years as a wildlife agent for the Washington Fish and Wildlife. Tough on poachers, he was awarded Wildlife Agent of the Year in 1972.

Enter the 26-acre park and walk a short distance up the dirt road leading to a pavilion and kid fishing pond (open to kids 15 years old and under). The pond was recently named in honor of Ken Kildahl, who like Smallwood was a longtime enforcement officer for the Washington Department of Fish and Wildlife

Now locate a trail heading left and take it immediately coming to an overlook of the Mashel River. Take a few minutes to read the interpretive sign on this river, an important salmon-bearing tributary of the Nisqually River. The river here is going through a restoration project spearheaded by a consortium of groups including the Nisqually Land Trust, Nisqually Indian Tribe, Pierce County Conservation District and the Town Of Eatonville. They have been creating new log-jams, removing invasive species, and improving riparian habitat to help salmon stocks recover. The restored river will be the centerpiece of a new trail system that the town is currently working on. Funding has been secured for a new hiker-only bridge over the river connecting the parks and for the Bud Blancher Trail which will connect the town to the Pack Forest.

Now walk alongside the river admiring its rapids and the tall stately firs and cottonwoods lining its banks. Look for eagles, mergansers, and dippers. Look too across the river to the millpond and try to imagine what the area looked like a century ago-not as tranquil as today. Continue walking upriver along the cobbled waterway. Pass semi-hidden remnants from the mill days. The forest has done a good job reclaiming the surroundings. At about .7 mile reach the remains of an old bridge at an old road. Turn right and follow the road a short distance to where a trail departs right to the kid fishing pond.

Walk around the pond with its nice outlet bridge, or pick up another old-road-trail and follow it west a short distance reaching another road-trail. This one parallels SR 161. Turn right and follow it back to the Smallwood Park Entrance. Then retrace your steps back to your car at Millpond Park. This trail connnects to the new 2.5 mile  Bud Blancher Trail leading to the campus of the U of W’s Pack Forest Conference Center