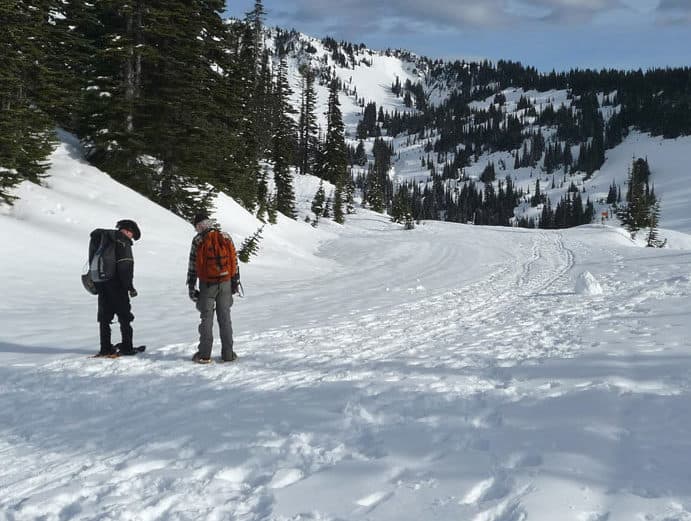 Sublime – that’s the word that best describes the view from Mazama Ridge when Mount Rainier emerges from the clouds. In Spanish Mazama means mountain goat and though you won’t see mountain goats in the winter months; you might wish you were a goat when you tackle the steepest pitch just below the ridge.

Whether you snowshoe or ski to Mazama Ridge, discover for yourself why this moderate snowshoe trip is a favorite of those who frequent Mount Rainier National Park in winter. While not a difficult climb, Mazama Ridge is not to be taken lightly. Snowshoers need to be prepared for inclement weather and should also be will-armed with navigational skills, especially needed if you get caught in a whiteout.

The weather was not a problem in late January’s balmy temperatures. We followed a colorful sunrise to Paradise in weather so mild that passenger cars could get to Paradise without traction devices or chains (chains are required in winter and park rangers may check to ensure you have them at hand when conditions warrant their use). The parking lot was bare of snow and the Henry M. Jackson Visitor Center was closed, it being a weekday.

Donning snowshoes we started down the Paradise Valley Road at the east end of the parking lot (5,411 feet) toward the Paradise River. Some snowshoers and skiers prefer to start from the Skyline Trail to Panorama Point behind the Henry M. Jackson Visitor Center though avalanche danger is higher.

It had been a few days since fresh snow had fallen – warming temperatures; snow-melt and water runoff had created furrows in the snow that blanketed Paradise Valley, creating an abstract design akin to a jigsaw puzzle. Islands of subalpine trees seem to hold the pieces in place.

Previous snowshoers and skiers had left their tracks on the road – we stayed in snowshoe tracks wherever possible. It is an unwritten but accepted rule that snowshoers don’t mess up ski tracks and vice versa.

After a half-mile or so we crossed the Paradise River on the road bridge (5,231 feet) and aimed ourselves toward Mazama Ridge. While there were few people on the slope, there was already an established set of snowshoe tracks to follow rather than break trail. Breaking trail is hard work, especially when the snow is heavy and saturated with moisture as it was for us.

Work your way up through the trees in a southeasterly direction until the terrain opens out near the head of the valley. We watched the tiny figures of snowshoers traversing above us toward what we call the secret passage, a hard-to-miss notch in the forested ridge. They used trekking poles, as do many snowshoers – we prefer ice axes – either is fine but if conditions are icy and the gradient steep, you won’t be able to self-arrest without an ice axe.

While there are open slopes below the ridge, the run-out is good and there are enough trees to anchor most of the snow in place. Be sure to check avalanche conditions before you set out and don’t forget sunscreen, especially important when on snow. Even on a cloudy day you are still at risk from the sun’s damaging rays.

If there are no established tracks to follow, set your own track, staying near trees as much as possible to avoid the risk of avalanche. Take turns breaking trail. Don’t stray too far left (north) as you will end up in steep cliffs.

The last 200 feet or so are steep; this is why switchbacks come in handy. Incidentally if you have never snowshoed before you will discover that it is often easier to break your own trail – especially on the descent rather than following the tracks of those who have gone before you.

We aimed for the notch in the ridge, a steep gully between trees where snowshoe and ski tracks lead. Once you attain the surprisingly broad ridge, you can shoeshoe either direction; if you follow the ridge (north) toward Mount Rainier you will see several high points – this is a scenic route where most snowshoers and skiers tend to go. If you head south (right) the ridge will eventually descend to the Paradise Valley road (the Paradise Valley road joins the Stevens Canyon Road that leads to Reflection Lakes).

After lunch on the ridge we continued, climbing from one high point to the next facing the mountain. Just when you think the views can’t get any better, they do. As much as we love the forest there is something that stirs the restless soul to go further, to go higher. One has to be careful to establish – and stick to a turnaround time. The siren will tempt you with another high point along the ridge, then another, then another. Don’t miss the views behind you as you head toward Mount Rainier – look to the south for peaks of the Tatoosh Range, including Castle and Pinnacle peaks. Further south are views of Mount Adams, Mount Saint Helens and even Mount Jefferson on a clear day.

The veils obscuring Mount Rainier’s face had begun to lift, Mount Tahoma jutted out from the snowy slopes and lenticular clouds drifted across as a cloud cap settled over the summit. Mount Rainier makes its own weather and conditions can change suddenly. Lenticular clouds are Mount Rainier’s weather forecaster – when a cap resembling a flying saucer tops Mount Rainier, that’s an indication of high winds at the summit and a storm is imminent. These clouds can have a blizzard raging inside them while snowshoers are basking in the sun on Mazama Ridge.

Only the tyranny of time bade us to turn away from our highpoint (6,000 feet) to retrace our tracks back to the notch. It took only moments to plunge-step down the slopes we’d trudged only a couple hours before.

To get there: From the Nisqually Entrance of the park drive to Paradise via the Nisqually-Vista Paradise road to the Henry M. Jackson Memorial Visitor Center and parking (5,411 feet). The Paradise Road closes in the evening (at 6 p.m.) and is gated at Longmire earlier; double-check with park rangers at the entrance on road-closure times. Rememember to bring your tire chains.

For additional information on fees, rules and regulations, current conditions or to obtain an overnight permit call Mount Rainier National Park (360-569-2211) or visit their website at www.nps.gov/mora/. A backcountry permit is required for over-night camping. You can also call the avalanche hot-line at 206-526-6677 for the latest weather forecast. The recommended maps for Mount Rainier National Park is Green Trails (Mount Rainier Wonderland Map 269S) or Green Trails No. 270S Paradise, Wa.